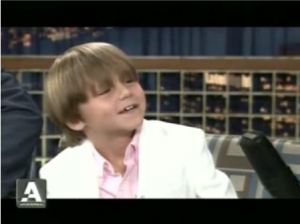 Guiding Light seems to be developing a new star on its sets right now. Eight-year old Nicholas Art (Zach) has been taking screens by storm lately. Currently co-starring with Scarlett Johansson on the big screen in The Nanny Diaries (see our article here), he has a host of other projects coming up. The former child model and one time Cheerios commercial star stated in a recent Late Night with Conan O’Brien interview (which you can watch here, if you dare) that he will be appearing as part of the cast of the highly anticipated fall dramedy Cashmere Mafia. Fans of the prodigious little actor will be able to see him on Tuesday nights as he appears alongside Lucy Lui, Miranda Otto and Bonnie Sommerville. The new ABC show which has already been hyped as the next Sex and the City and just happens to come from the same producer. It follows four successful women as they lean on each other for support through marriages, business rivalries and the trials of raising children.

Art has also just finished shooting a film for HBO called Taking Chance. The film is based on a short story by Lt. Col. Michael Strobl and details his journey with the body of Lance Cpl. Chance Phelps, to Phelps’ hometown after he was killed in action while serving in Iraq. It was directed by Oscar nominated producer Ross Katz, who was also behind films such as In the Bedroom and Lost in Translation. In a startling coincidence, the film stars two former GL stars, Kevin Bacon (Tim Werner, 1980-1981) and Paige Turco (Dinah Marler, 1987-1989), as Art’s parents. Taking Chance should be premiering early next year.

GL at the Daytime Stars and Strikes...