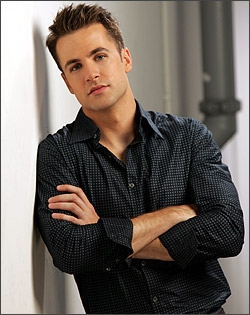 Yet another of Guiding Light‘s many talented stars is making their way to the stages of New York’s thriving theatre scene. John Driscoll, better known as Henry ‘Coop’ Cooper Bradshaw, the frequently confused love interest of Ava and Ashlee, will be taking his place in the cast of Matt Morillo’s Angry Young Women in Low-Rise Jeans with High-Class Issues from September the 13th until October the 7th. Those who attend will be lucky enough to see John take on not only a new role, but two of them. He will play both Ronnie and Barry, two decidedly different characters in the show which Nytheatre.com has called: ‘An evening of straight-up, sitcom-style comedy that boasts an outstanding cast, some fine direction, and many funny moments…’ The sexy comedy has been running to audience acclaim for some time now and promises a naughty-good hour and a half of laughs.

This will mark Driscoll’s stage debut in New York. The Virginia native is not new to theater of course. He has previously appeared in productions of Dangerous Liaisons, Godspell and The Odd Couple. Before joining GL in 2004 he appeared on Blossom, One Tree Hill and Law & Order: Criminal Intent.

For those interested in seeing Mr Driscoll performing on a new set, the show will be running from Thursdays to Saturdays at 8:00 PM with a 3:00 PM matinée on Sundays at the Players Theatre, 115 MacDougal Street New York, NY 10012. For tickets, please call 212-352-3101 or 866-811-4111 (toll Free). To order online, visit Ovationtix. For additional information, reviews and a few shots from the show, visit their official website at this link.