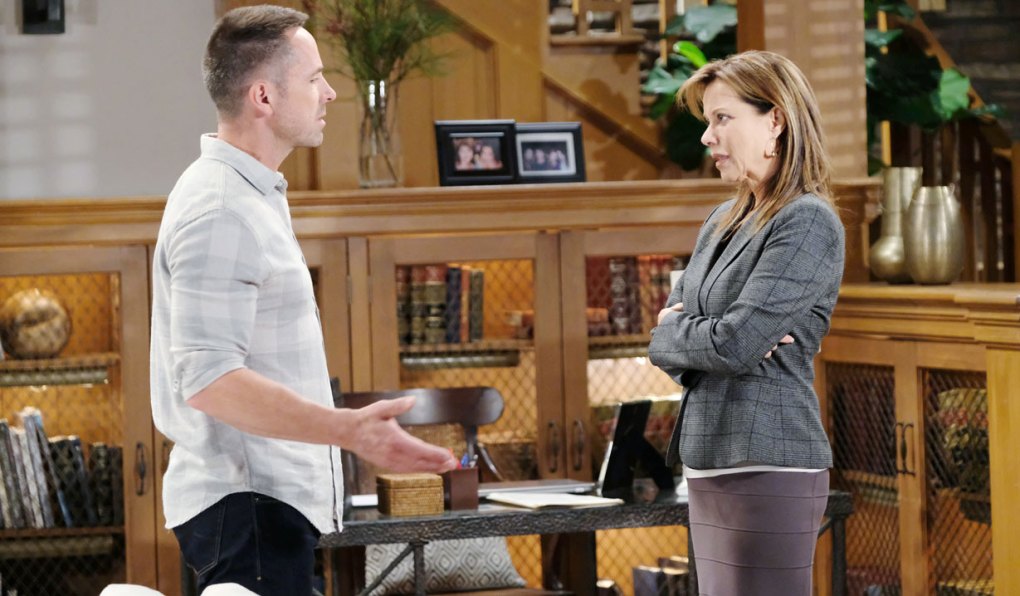 Soaps.com has new General Hospital spoilers for the week ahead. Sonny may have some unanswered questions but others have a few for him as well. While Curtis gives Valentin an update, Nina receives a warning, and Margaux and Jordan join forces on a new mission. Plus, Drew and Sam spend some time together, which is followed by a confrontation with Kim.

General Hospital spoilers for the week of September 10:

In this week’s Spoiler Digest, Fall previews, dire situations, risky behavior, we have new spoilers for all four soaps including Bold and the Beautiful, Days of our Lives, General Hospital and Young and the Restless.

In Monday’s GH Recap: Charlie’s Pub explodes, Jason and Kristina are put in danger, and Michael hears from Nelle.

Valentin gets an update from Curtis.

In the weekly GH Spoiler Video: Charlie’s Pub is declared a crime scene after it’s rocked by an explosion, and Oscar takes a swing at Cameron for kissing Joss.

Maurice Benard has been cast in The Victoria Gotti Story and will play John Gotti, head of the Gambino Crime Family.

In Tuesday’s GH Recap: Chase finds a skull in Charlie’s, Margaux admits something about her father, and Sonny realizes Mike blew up Charlie’s.

Liz is upset with Cameron.

Just in! Genie Francis returned to the GH studios and found a lovely surprise waiting.

In Wednesday’s GH recap, Julian learns there’s a body under the pub, Oscar fights with Cameron, and Robin pays her mother a visit.

Be sure to test your knowledge and play GH couples trivia with questions about weddings, pregnancies and romances.

In Thursday’s GH recap, Robin clears the air with Peter, Jason suggests hacking into the evidence log, and Ryan settles into Kevin’s life.

Kristina opens up to Sam.

Just in! James Read is returning to GH as Chase and Finn’s father.

In Friday’s GH Recap: Maxie and Peter are trapped together, Mike tells Sonny it’s time for him to go to a home, and Dawson zeroes in on a connection between Sonny and the body.

Jordan and Margaux continue to brainstorm.

Curtis has an important update for Valentin.

After Mike trampers with the gas lines at Charlie’s Pub, Kristina spots him and alerts Sonny to his father’s whereabouts. Julian smells gas and tries to get everyone out of the pub, but Mike refuses to leave. When Kristina sees him drop a wrench, she realizes what Mike did. Kristina rushes back into the pub to fix the gas leak but is caught in an explosion, as many race in to save her. Julian begins to see what’s behind Mike’s actions and the truth surrounding the dead body hidden there is at risk of being revealed.

Ava gets under Nina’s skin.

Margaux receives a warning from Sam about Drew.

Drew puts Kim on the spot.

Oscar goes to Sam for answers regarding his parents’ strange behavior.

Many circumstances will have an effect on Jason, Sam and Drew’s lives.

Margaux’s interest in Sonny goes past professional and she continues to plot to take him down.

Brad’s direct guilt could affect his and Lucas’ happiness.

Robin visits Port Charles in order to see her brother, Peter, which could turn things around for everyone when Kimberly McCullough returns to General Hospital.

Maxie struggles with her feelings toward Peter, as he and Lulu bond over work.