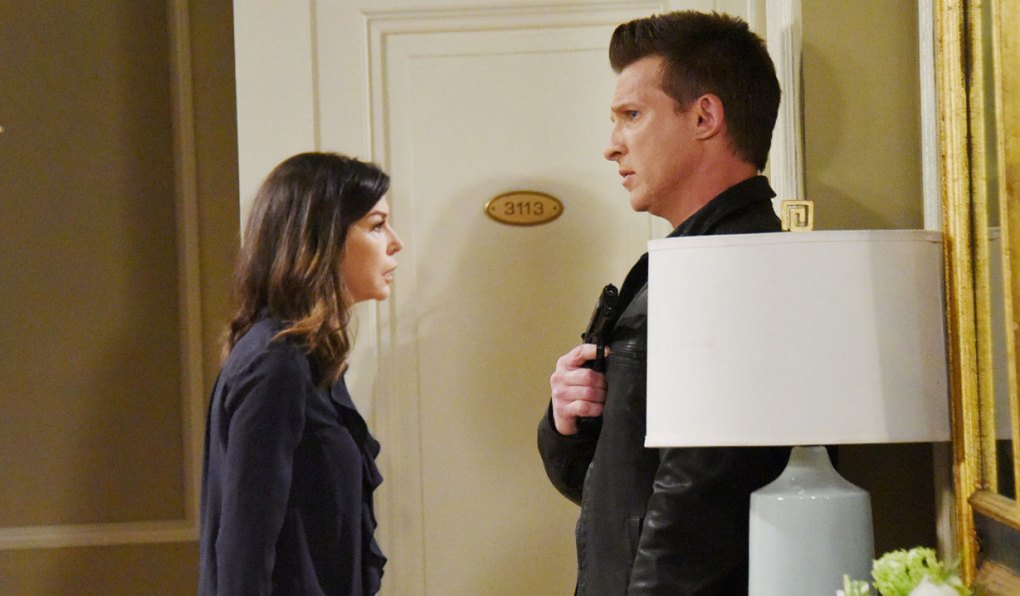 There’s always a fresh batch of General Hospital spoilers posted each Friday at Soaps.com. Looking into next week, Port Charles residents have their hands full with confrontations and Nelle running around town messing with Carly – and Ava. Good thing Griffin’s around to comfort her. But it’s not all bad… Kim does right by Julian, in regards to his family, and Sonny receives a call that lifts his spirits. Wait, there’s more – be sure to return every morning to read the new spoilers added under each episode.

General Hospital spoilers for the week of April 16:

In last week’s GH column, Jim’s departure was a welcomed event, Anna and Carly have lost their minds, and Mike’s storyline took a disappointing turn into mob-land.

In this week’s Spoiler Digest, poisonous relationships and secret pacts, we have spoilers for all four soaps including Bold and the Beautiful, Days of our Lives, General Hospital and Young and the Restless.

In Monday’s GH recap Carly freaks out, Ava freaks out, and Sam bumps into Jason while Spinelli gets arrested.

Soaps.com readers have spoken and all votes have been tallied. Read your 12th Annual Sudzies Award winners, based off the Daytime Emmy nominations, to see which soap opera actors and shows the fans of daytime voted for. Thank you for participating in another fun year, and we look forward to delivering all of your Daytime Emmy coverage on Sunday April 29.

Play soap trivia! Do you know when the first soaps broadcast on the radio? Who Jason Morgan’s sister was on General Hospital? Test your soap knowledge with Soaps.com’s Soaps History Trivia game, which includes fun details from past soaps as well.

In Tuesday’s GH Recap, Avery’s case is elevated to a kidnapping, Jason bails out Spinelli, Alexis drops in on Sam, and Lucy propositions Kim and Julian.

Lulu gets an idea for a story.

Spinelli gets himself in a bit of a bind.

Alexis has a surprise.

In today’s teaser video, Julian and Kim are put on the spot as Alexis assumes Sam and Jason are reuniting. Plus, Dante doesn’t necessarily agree with his wife.

Photos and videos of the Daytime Emmys Lead Actress nominees celebrating their honors and having some fun and laughs at the Leading Ladies Luncheon. Nancy Lee Grahn (Alexis), Maura West (Ava) and Laura Wright (Carly) took to social media to give fans a glimpse inside the annual get-together at a well-known California restaurant.

Congratulations are in order for the former General Hospital actor who played Blackie Parrish. John Stamos welcomes first baby with his new wife Caitlin McHugh and posted an adorable first look photo on Instagram to share the news.

Carla Hall from The Chew guests on General Hospital in scenes with Olivia.

Anna strikes out, but pushes on.

Injury alert: GH temporarily replaces Leslie Charleson with Patty McCormack as Monica Quartermaine. Due to her sudden injury, and the fact that episodes were already written, the show’s hands were tied.

The Daytime Emmy winners will be announced at the end of the month. While we wait, watch the General Hospital Daytime Emmy reels, which include submitted 2017 scenes from the actors who portray the characters of Port Charles.

In Thursday’s GH Recap: Ava and Sonny go on air to try and find Avery and Mike, Franco visits Betsy, Carly gets good news, and Kim offers an invite to Drew.

Video teaser, everyone in Port Charles worries about the latest child who’s gone missing, which leads Ava to plead for Avery’s safe return. As her mother goes public, Sonny fights to get answers as to where his daughter is.

Anthony Montgomery will guest on an episode of Greenleaf in a part that is bound to be a departure from his role of Dr. Andre Maddox on GH.

In Friday’s GH recap, Robert grows more suspicious of Anna, while Spinelli finds a photo of Henrik, and Mike and Avery are found.

Carly is at her wit’s end.

Anna receives a visit from Robert Scorpio, who wants to help on her quest to find Henrik.

Robert, Anna and Emma go on a super-spy adventure in Switzerland.

Jason runs into Sam in Switzerland.

Spinelli ends up in jail, which pushes Jason and Sam together to help their friend.

Ava wants Mike arrested after her and Avery are found, which doesn’t sit well with Griffin.

Drew confides his feelings to Curtis.

Anna continues with her plan.

Franco is stuck between two evils.

Given the videos posted by Parry Shen, it looks as though we could be seeing his character Brad in scenes with Lucas (Ryan Carnes) and Felix (Marc Samuel).

Well, look at who I just bumped into… @ryancarnes1 @generalhospitalabc #GH