Vote! Take our General Hospital Poll: Which man do you want to see Hayden with?

Read Friday’s GH Recap: Back Together.

Nathan opens up to Maxie.

Franco is curious about Nina’s whereabouts.

An incident changes the future of Baby AJ’s custody.

Spinelli wonders where he stands with Maxie.

Julian has an offer for Olivia.

In Friday’s blog, Dustin thought Friday’s cliffhanger was great and took him back to the eighties when you didn’t dare miss an episode on Friday. Read the GH Rant and find out what he thought about Maxie’s choice and what Kiki and Morgan did to Michael.

Read Monday’s Recap: Part Of You.

Spinelli and Maxie get a surprise visitor.

Read Wednesday's GH Recap: Thanks, But No Thanks.

Obrecht has a suggestion for Nathan.

Julian tries to persuade Olivia to accept his protection from her blackmailers.

Kiki makes an admission to Julian.

Alexis and Ned make a shocking request of Michael.

Obrecht and Nina threaten each other with their secrets.

Carly starts to probe into what Hayden may be hiding.

Hayden makes her intentions known to someone, while Carly investigates her identity.

Ned admits his feelings to Olivia. 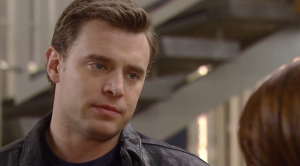