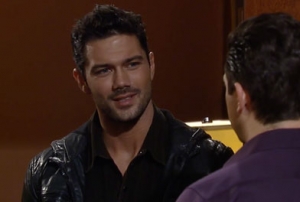 Bobbie reveals a family secret to Michael while visiting her old home.

Carly suggests to Jake that he seek counseling.

Sam questions Obrecht about what she knows about the masked man.

Sonny helps out an enemy.

Helena is caught on the phone by Nik.

Read the GH Recap: Batter Up!

Michael tells “Fluke” about his project.

Tracy tells Lulu about the fight she had with “Fluke” when she brought up his past.

Julian updates Sonny that the man who wants him dead is continuing to masquerade as Luke, and that “Fluke” is still out there.

Sonny wonders if the real Luke is even alive.

Nefarious activities take place that lead up to the run-off election.

Since election night, the ballot box from one polling place has been missing.

Police receive a tip on where the ballot box can be found.

Various PC residents have had a hand in the rigging.

Anna’s job is in jeopardy.

Jake hides some evidence from Carly as they continue to bond.

Patrick encourages Sam to let go of her obsession.

New! Read Soap Stars: Where Are They Now? A sequel starring an “All My Children” alum looking to Rocky Balboa for guidance, a royal title, a Hallmark movie, fan Q&As and more.

Read the GH Recap: Get With the Program.

Anna encourages Jordan not to blow her cover.

Rosalie is in cahoots with someone.

Fluke has a warning for Johnny.

Johnny has a business offer for Lulu.

Julian points out to Sonny that Shawn must be careful or their sons will pay the price.

Shawn spies on “Fluke” at the house, while “Fluke” senses their might be an intruder in the house.

Elizabeth interrupts Jake as he prepares to carry out Helena’s latest task.

Sam and Patrick prepare for their romantic date, unaware that someone else is there.

Dante walks-in on Johnny and Lulu.