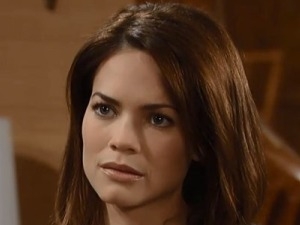 Vote! General Hospital Poll: What do you think of Ivy?

Read the GH Recap: Shacking Up.

Carly and Jake find themselves in a compromising position.

Elizabeth shares an emotional moment with a loved one.

Duke and Lucy have an open and honest chat about their feelings.

Friday’s “GH” Rant – Dustin was a big fan of Agent Sloane and Anna. Read the General Hospital Rundown to see what he thought about their chemistry and what other unlikely couple steamed things up.

While Morgan tells Sonny about the baby’s paternity, Ava makes plans to name her daughter.

Ned and Alexis have an uncomfortable run-in while trying to assess their relationship.

Fluke gives Carlos an assignment then checks in on his prisoner in the basement.

Liz second-guesses her feelings during an uncomfortable meeting.

Michael tells Bobbie his plans for her childhood home, turning it into the AJ Quartermaine Clinic.

Read today's GH Recap: Not So Sure.

Sonny wonders why a new prisoner is behind bars.

Nathan and Dante give Johnny a warning.

Jake opens up to Carly about his memory flashes and the two continue to bond.

“Fluke” discovers that his plan with Carlos is being disrupted, and tries to hide his anger from Tracy.

Bobbie reveals a family secret to Michael while visiting her old home.

Carly suggests to Jake that he seek counseling.

Sam questions Obrecht about what she knows about the masked man.

Sonny helps out an enemy.

Helena is caught on the phone by Nik.