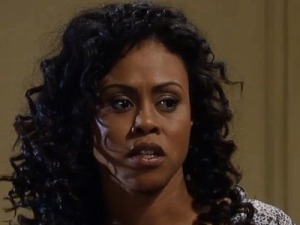 Vote! General Hospital Poll: What should Carly do?

Elizabeth gets asked out on New Year’s Eve, putting a damper on her relationship with Jake.

Maxie and Nathan’s special night is tested due to unforeseen circumstances.

Anna tries to convince Jordan to stay undercover for her own safety.

Friday’s “GH” Rant – Dustin didn’t think it was going to be a happy New Year for many in Port Charles. Read the General Hospital Rundown to see what he thought about Obrecht surprising the kids as Krampus.

As they try to make their way back to each other for New Year’s, both Maxie and Nathan encounter travel snafus.

Jordan comes up with a new cover in order to save her life.

Patrick and Sam discuss the state of their relationship, and decide to spend New Year’s together.

It’s New Year’s Eve in Port Charles, and many PC residents turn up at the Metro Court to ring in 2015.

Some jealousy and tense couple encounters ensue for some, along with romance for others.

Encore episode to be determined.

New! Read Soap Stars: Where Are They Now? Film roles, a self-help book, a VH1 series, a passing, fan Q&As, a townhouse for sale and more.

Carly and Jake find themselves in a compromising position.

Elizabeth shares an emotional moment with a loved one.

Duke and Lucy have an open and honest chat about their feelings.