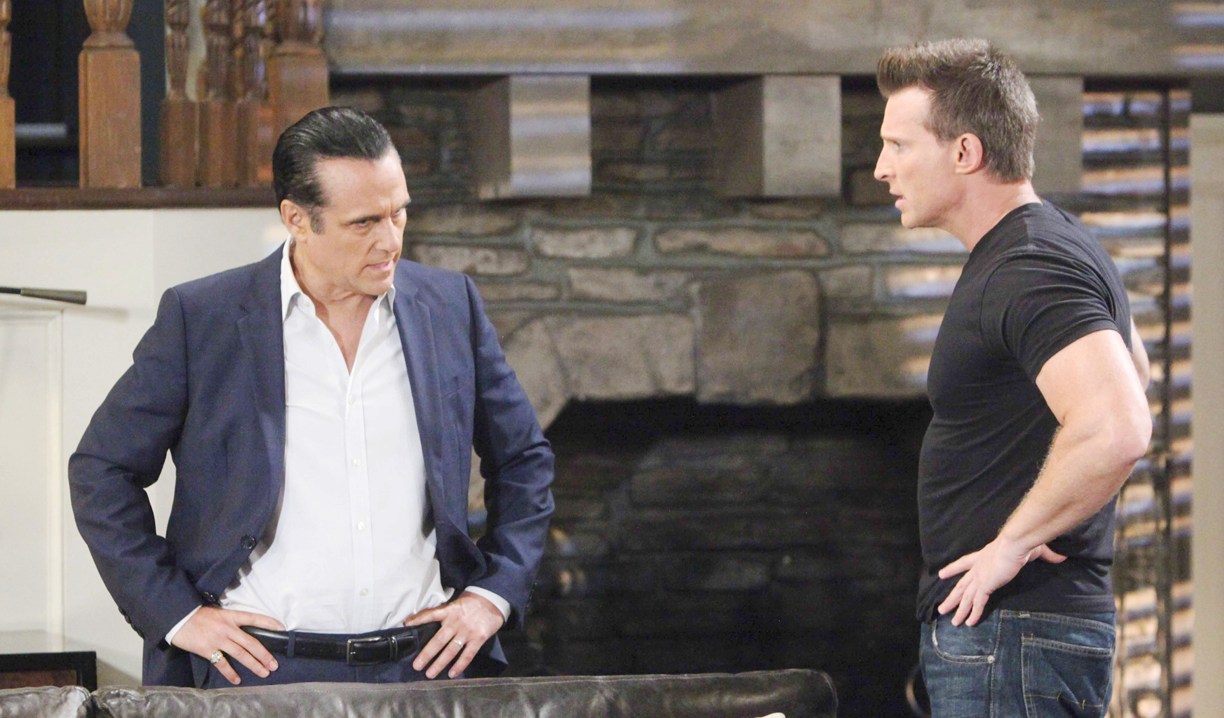 And here I lamented in last week’s Deconstructing GH that it was a dull week due to predictable plot points, only to have this week turn out to be equally as slow and dominated by Oscar’s illness. A pre-empt led to a shorter week, and bumped the expected return of Genie Francis back a day. Oh, and did everyone catch a major rewrite bomb that was dropped on the viewers?

Did he or didn’t he?

Margaux continues to close in on Sonny and has already deduced that he killed her father and Mike covered it up. This DA sure has figured things out in a flash. Of course, what is missing is the smoking gun. Mike can’t recall what he did with the gun dumped with Vincent Marino’s body, and the gun is what will tie Sonny to the crime. Oh, and did we all pick up that Sonny confessed to Jason that he did shoot Marino for Scully? This is a huge rewrite! That or a massive writing faux pas. Up until now, Sonny has only said he buried the body for Scully, but touched the gun, leaving his prints on it. So which version is it? Viewers’ reactions ranged from confused to downright angry at this on social media.

Sonny didnt kill Margaux's father, Joe Scully did, Sonny got rid of the body. Am I wrong, or did they change the story #GH

Do the writers of #GH think that fans have short memories or something? We all saw the scene where sonny told Jason the body was wrapped in plastic in Scully’s trunk! And he just buried it! So why now r they saying sonny killed him!!!! @MichelleAltman1 @valentinifrank

Oops they did it again!

Another writing blunder occurred during Nina and Charlotte’s afternoon out. Charlotte wished Nina and her papa had a baby so she could have a baby brother or sister. Poor Rocco, I guess he is nothing! Maybe it just wasn’t the writers week?

So Charlotte wishes Nina and Val had a baby so she'd have a baby sister or brother. Um.. no one mention Rocco?! #GH

Thanks to Cam, Oscar confronted his parents about his illness, and they were forced to tell him the truth. I’ll say one positive thing about the writing recently, these secrets are coming out fast and furious these days. Sam’s talk with Jason about Oscar and Drew before Jason knew what was going on, said so much, without her actually revealing anything to him. Likewise, Oscar’s conversation with Jason on the pier about dying and his tumor was well written, and I’d like to think this could bring Jason and Drew closer, but I won’t hold my breath. Sam and Jason had another great talk about how time is precious and not taking one another for granted. I’m still waiting for Sam to make a decision here!

Meanwhile, Kim is still keeping Julian in the dark about Oscar, and all he wants to do is be there and support her. Instead, he gets smacked down by Drew, warning him to back off and give Kim space. I’m already preparing myself for when things go downhill with Oscar that Kim and Drew will have soap opera grief sex.

More: GH star competes on Dancing With the Stars: Juniors

One secret I don’t think we will see come out anytime soon is the baby swap. This is pretty ridiculous because the heart condition clue is staring Michael, Carly and the others in the face, and Mike said a few times the baby looked just like Carly. I’m already tired of Brad panicking the truth will come out every time he’s on screen. Julian should just fess up to Lucas about what he knows, though Lucas might only feel his father is lying to him and trying to sabotage his family. Julian’s got himself in another no-win situation just like he did with his sister Olivia.

Peter learning that Obrecht was spotted and that Anna was going after her made him pause and take concern for her. He even called Anna to advise her to be careful. I was pleasantly surprised by this. It’s another example of the writers speeding things along for a change. I do wish they’d slow it down with Maxie’s interest in Peter because her husband hasn’t been gone that long. It’s obvious this is where things are headed for them, but can we give Maxie a year to grieve?

So not worth it

Ava vowing to go to war with Kiki and vowing to make her pay because Kiki had sex with Griffin is doing nothing for me, mainly because the dude is such a dud!

You just aren’t yourself

One thing the show is taking its time with is setting Ryan up to target his victims. Given he has a thing for blondes, Ava and Kiki may want to watch their backs. Lucy’s incessant yammering about Kevin not being himself is going to be her downfall, but we all know it’s Felicia he’s after. With Halloween around the corner, I want to see the creep factor amped up a bit with this storyline.

These are only my opinions on the week. Please feel free to leave your own in the comments.