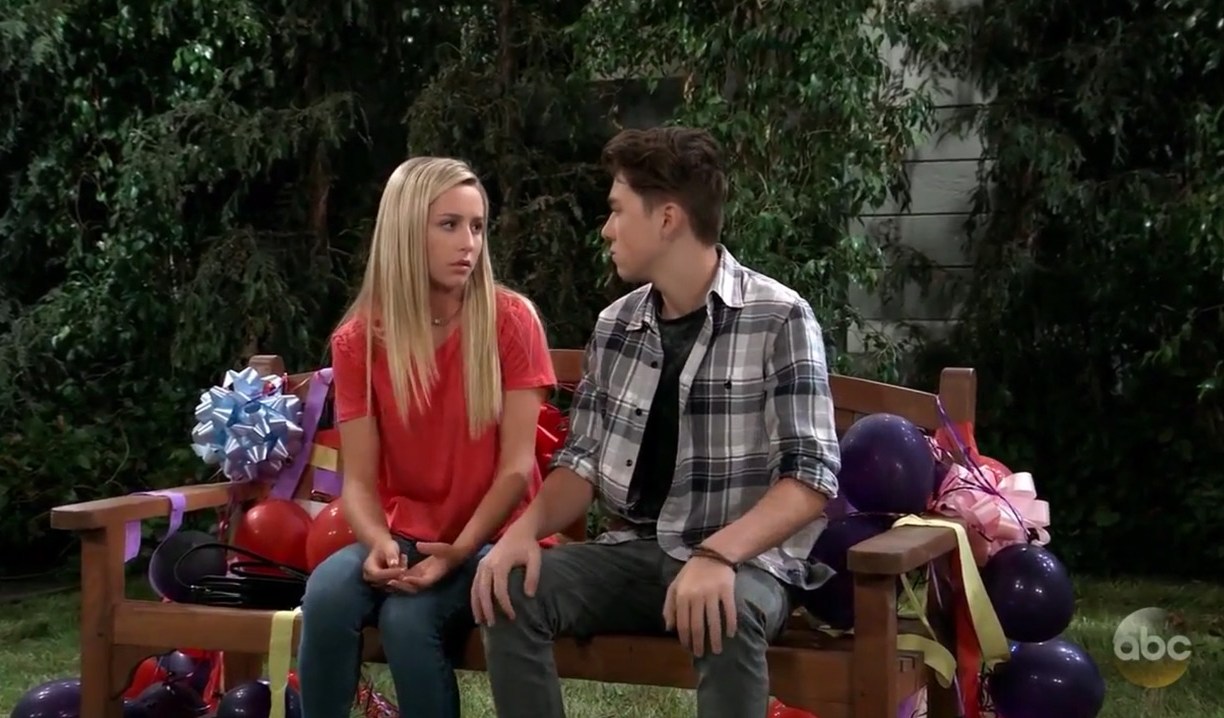 After last week’s incredibly short week due to pre-emptions, it was good to have GH back. Between the twin switch, Oscar’s illness, and the outcome of baby Wiley’s case, there was a lot going on in Port Charles.

Many were sure the Kevin and Ryan switch had already taken place, but it hadn’t, until this past week when Ryan got the upper hand on Kevin. The scenes between them, leaving the viewers guessing who was who for a good portion of last Tuesday’s episode, were amazing. We don’t know how Kevin learned his brother was alive, or where he was all this time. I’m sure that explanation will come. Many readers have commented in our General Hospital recaps that they don’t see the point of revisiting this storyline. If it makes for good drama and uses Felicia and Mac more than just having them show up every 6 months to be Maxie’s parents, then I’m excited for it. Laura’s return obviously will factor into it as well. And let’s be honest, the cast of GH is pretty big, maybe Ryan can trim it down a bit.

The swap stays a secret for now

Brad lucked out when the birth mother decided to withdrawal her decision to take her child back, begging the question what did Julian do to convince her to make such a decision? I hope he did not do something that will make matters worse, but this is Julian, so he likely did. It’s beginning to look like the identity of the birth mother is going to be irrelevant, which would be surprising because usually on a soap everyone is involved in everyone else’s drama and secrets. Now it seems we sit and wait for the inevitable. Michael will be mysteriously drawn to Wiley, Mike will continue to make comments that he looks just like Carly, and eventually the baby will get sick and need a transplant of some kind. That we can predict how this is going to play out, to some extent, is why I dislike baby switch storylines. They are overused on soaps along with the old “let’s change the DNA test” storylines.

I discussed in last week’s Deconstructing GH, LGBTQ+ representations on the soap, and my dislike of Parker and Kristina’s romance, though it’s hard to call it that given the storyline was more about Kristina’s coming out and Parker just factored into it for a handful of episodes. Now she’s made a break from Parker and is starting her life over in Port Charles, again. Hopefully, we will see things get better for her, even a new romance, and she won’t just become another Brad and Lucas, who until recently have just appeared here and there for the sake of it. With Valerie back in the picture, and Kristina working at Charlie’s, things are looking up for Kristina. Some viewers are already shipping Val and Kristina, though having a second established character who so far has only dated men come out is probably too much to swallow.

Oscar’s life has been pretty amazing lately, up until he fainted, wound up in the hospital, and Kim admitted to Liz and Drew he is dying from an inoperable brain tumor she’s been keeping a secret. How does a kid Oscar’s age not question being taken to doctors’ appointments, having tests run on him, and seeing specialists? Kim claimed he just thinks she’s being overprotective, but in this day and age has he not turned to the internet to google these doctors and tests? One viewer suggested on social media that he’s not sick and Kim has Munchausen By Proxy, which would be an interesting twist, though with Terry apparently playing into the story it seems unlikely. The whole plot just reeks of the writers’ attempt to throw Tamara Braun an actual storyline, and maybe one to bring Kim and Drew closer. Theoretically, it could do the same for Drew and Sam, though I could also see them turning this into a “Jason is the only one who can save Oscar” story. How about we just get on with Drew getting his memories back, which obviously Kim would factor into. I’d rather be watching that storyline.

Same here. Tests for brain tumors must be very involved.

He don't have cancer. His mom has Munchausen-by-proxy.

I’m a little shocked that the show killed off Madeline, because she was such a fun and campy character, brilliantly played by Donna Mills. Obrecht’s appearance at her pretty much non-existent funeral service was a nice surprise, as was her pointing out that Madeline was the portrait of health and for her to die by heart attack was unusual. Either someone very powerful has Nina’s child and doesn’t want to be found, or perhaps Madeline’s death was faked? This is a soap, so everyone is fair game to be brought back from the dead. I hope we see Madeline again. At least Nina knows there is a possibility her child is alive, thanks to Madeline’s final gift. The Annie locket clue that her mom left her was a nice throwback to a beloved story, and also adds a little fun twist to the mystery. Now Curtis has to find a kid and a locket, and hopefully, there will be no Miss Hannigans to get in the way.

These are just my opinions on the soap. Please leave yours in the comments.