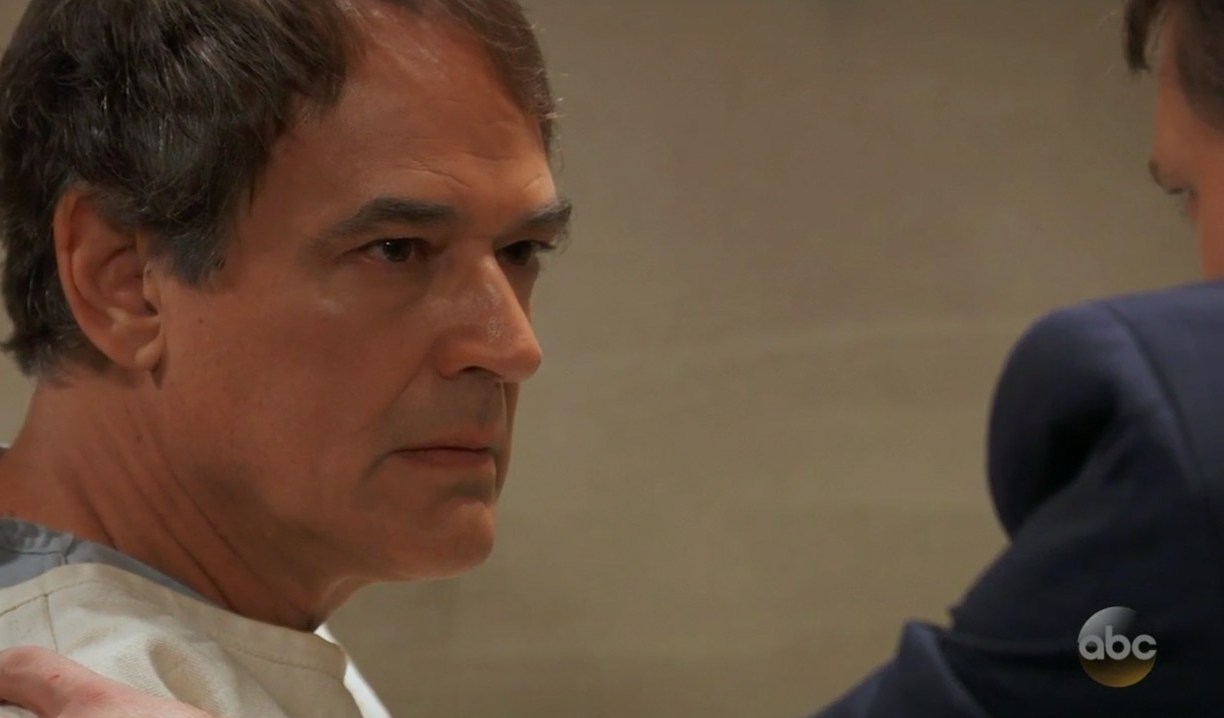 When it comes to evil twins, it doesn’t get much more psychotic than serial <em>General Hospital</em> killer Ryan Chamberlain (Jon Lindstrom). Ryan followed Felicia Jones (Kristina Wagner) to Port Charles after she witnessed him commit murder in Texas, then she developed amnesia. The two dated until Felicia’s memories returned right as he proposed, but Mac (John York) saved her from the mad man. Eventually his good twin Kevin Collings came to town, forcing him to spend a long time making sure everyone knew he was a psychiatrist and not a psycho like his brother. Ryan was believed to have died in a funhouse fire, but years later it would be revealed he survived and Kevin had hidden him away at Ferncliff while trying to cure him. Ryan eventually escaped, locked Kevin in Ferncliff, and began killing again while using Kevin's identity as his cover. Ryan was eventually caught and remains locked up in Pentonville.

Nelle’s reign of terror came to an end, and Bensch’s trial was finally back on our screen. Anna also returned and set the scene for a new mystery. Margaux continued yammering about the flash drive, which honestly just annoyed me, but Friday’s cliffhanger was the highlight of the week.

So long, for now, Nelle.
Ava making sure the baby blanket showed up to seal the case against Nelle and help exonerate Carly was a nice way to close out Nelle’s storyline, though eventually the blanket will be traced back to Ava. Carly sneaking into the PCPD was hilarious. Were all the cops on donut break? I wish I could have enjoyed her last scenes with Nelle, gloating over how she’s won, but I couldn’t because Joss’s epic smackdown with Nelle last week was so much better and more satisfying. It’s a shame Carly wasn’t the one to toss Nelle around the docks. Nelle’s portrayer, Chloe Lanier, reminded everyone on Twitter that Nelle’s not dead nor done yet, so one day she could return. Until then, I plan to enjoy a Nelle free show.

Thank you to all of my passionate and lovely @GeneralHospital fans !!! I love you from the bottom of my heart. Thank you for helping make the past two years some of the best of my life. Also…Nelle isn’t dead. She isn’t done. ☠️?

Sam makes a point.
I ranted in last week’s Deconstructing GH Jason should be putting Sam and the kids first. Not only was he willing to run off to Canada with Carly for three months, this week he told the DA he had no problem going to prison for her if it meant she was safe. While many viewers noted that’s just who Jason is, he is willing to do whatever it takes to protect those he loves, he also just returned after losing five years with those he loves. It would be nice to see him take stock of that in future choices. I was delighted that Sam pointed out to him while his devotion to Carly was admirable, others also needed him around for them. Bravo Sam!

Kiki vs. Dr. Bensch.
After weeks of being sidelined, Kiki and Bensch’s storyline was back on track, sadly just in time to be predictably derailed by Kiki’s secret. The only people I feel for here are Francesca, who may not get to see Bensch pay for what he did to her, and Alexis, who will be left with mud on her face. Alexis really needed this win because her confidence has been so low over the past year, and this is her first big case since her license was suspended. I should feel for Kiki, but she’s blown her own case by not being honest with Alexis. Franco’s blunder in sending Ava the text about Kiki and Griffin’s sex was an unexpected surprise, but even I didn’t think Ava would use it to sabotage Kiki’s trial. Then again, this is the woman who stole Kiki’s boyfriend. Rather than looking forward to seeing Bensch get what he deserves, I may have to temporarily settle for seeing Ava rip Griffin to shreds. I was a fan of Ava and Griffin, but now I want to see him out of both Ava and Kiki’s lives. His ramblings about moral compasses and imperfect people are getting tiring too. While almost everyone in Port Charles is a hypocrite to some degree, the preachy ones like Griffin tend to be the worst.

More: Husband and wife duo star in Love at Sea

Where is this going?
DA Dawson telling Peter she’d consider dropping the charges against him if he’d just return the flash drive to Drew, when she has the flash drive, made no sense. If I’m supposed to be intrigued by the mysteriousness of her and her motives, I’m not anymore. As others have stated on social media, it’s hard to care about Drew and Margaux in any kind of paring given what she’s doing. She’s wearing thin on me and needs to get on with her plan. The one plus in this storyline came in Friday’s episode when Jason warned Drew that Margaux has an agenda. Maybe my hopes of seeing these two work together, and be civil with one another, aren’t so dead after all.

What are they doing w/DA Dawson – telling Peter he needs to give Drew his memory back knowing full well she has it in her own possession. How can anyone root for her & Drew – she is lying to him, holding his memory hostage. What's the point of this sl? Give Drew his memory! #GH

Mystery patient number two?
Anna and Finn, held captive, reunited in the compound. The kidnappers need Finn to treat a mystery patient with a rare unknown blood virus. Could Finn have been their real target all along? Could this patient be one of the other patients 1-5? Many readers have commented in our recaps, and on last week’s blog, that they think Anna and Alex, and Ryan and Kevin, are patients 1-4, with Drew and Jason 5 and 6. It could be an interesting story. However, I really want this new patient to be a huge shock we didn’t see coming. In the soap world, that’s hard to pull off. Whatever happens, for now, this storyline has me interested. Others are also hoping for someone big involved with this story. With Peter trying to reform himself, someone major is pulling the strings, and I’m hoping we see the return of Victor Cassadine.

Helena or even Nickolas cassadine, I have been hoping from the very beginning of Peter's story that he would turn out to be Alex's son and not Anna's, I hate that the writers have destroyed Anna's character

Fan’s theories pan out.
From the moment Kevin appeared guarded about the patient in the cell next to Carly’s in Ferncliff it seemed obvious we were dealing with his twin Ryan back from the dead. Friday’s amazing cliffhanger seemed to prove that, unless Kevin and Ryan were triplets. Even though this was predictable, the way it played out was enjoyable and I can’t wait until next week. Now the big question is, is Ryan, er or Kevin, also the sick patient Finn is being asked to treat or is that someone completely different?

These are just my thoughts. Please leave your own in the comments.