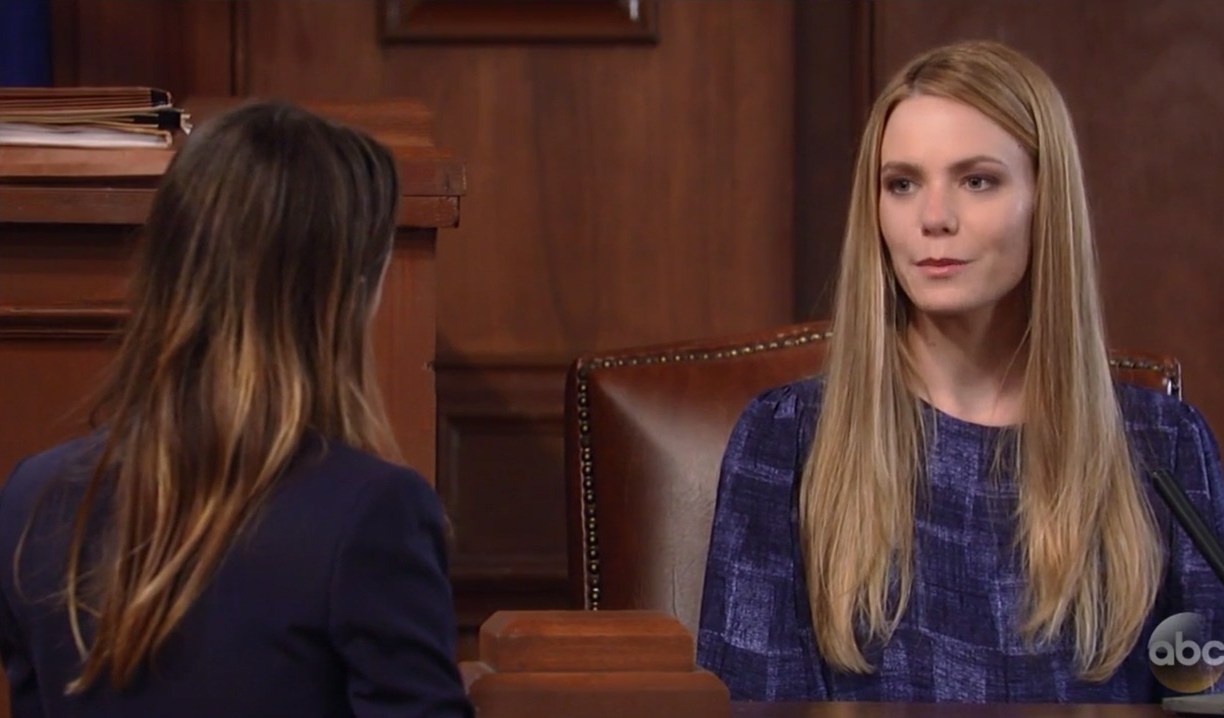 I found General Hospital to be exceptionally frustrating this week. Nelle has gotten away with murder for far too long, Bensch naturally skated free, and even Peter’s kidnapping has been dull. It would be nice to see some of the right people winning soon.

I object!
The Nelle verses Carly storyline is one many viewers are sick of. It’s lunacy that anybody believes Nelle’s side of things, and it’s equally frustrating that Sonny, Diane and others think Carly is losing her mind. At least Michael is now firmly behind his mom and knows Nelle is up to her old tricks, but neither he nor Jason have proof against Nelle. Joss, Bobbie and Dante’s testimonies dug Carly’s hole even deeper, and Nelle’s crocodile tears on the stand made things worse. After Diane’s terrible performance and refusing to cross-examine any of the witnesses the DA called perhaps Sonny needs to reconsider her as his lawyer and maybe hire Alexis for future cases.

Creep.
I suggested in last week’s Deconstructing GH, Bensch would file a glowing review of Kiki to make her charges look false, and that is just what he did. That he’s getting away with what he’s done to Kiki is predictable, which makes it infuriating. Hopefully Bensch will fall down the hospital elevator shaft or steps very soon. At least Kiki had the brains to hire Alexis, who seems to be getting a lot of legal work lately. Alexis and Liz’s involvement in this storyline is the only thing it has going for it.

Peter Peter pumpkin eater.
Getting to see more of Dr. Obrecht has been one of the few bonuses of Peter’s storyline. Still, even her holding him hostage hasn’t been as satisfying as it should be. Peter is getting turned into the victim yet again, and like Bensch and Nelle isn’t paying for anything he’s done. We know Obrecht won’t kill him, and any confession she forces out of him won’t be admissible in a court of law. Where is this storyline going?

It’s bad enough that the Peter storyline has turned Anna from a bad-ass super spy into a blubbering weakling, but now it’s ruining Robin and Anna’s relationship. Robin is questioning everything about her mother, much like many viewers have questioned making Peter the son of Anna and Faison to begin with.

Robin looks how we all feel about this storyline. Mystified and nauseated. #GH

The missing flash drive.
There seems to be no sign of that flash drive that Peter dropped after being kidnapped. My money is on Valentin having it somehow. One storyline I was looking forward to was Drew getting his memories back, and now that’s off the table because Drew decided not to risk it for the sake of Oscar. Drew’s character has sadly been reduced to constantly grabbing food with Kim and Oscar. Monica inviting him to move into the Quartermaine Mansion was charming, and thankfully he accepted the invitation. At least this will also be more pressure on Nelle, because he knows the games she plays. Place your bets that Nelle’s next move is to push Michael to find their own place.

What was the point?
Was there a reason for sucking up airtime with Lulu and Dante’s one millionth argument about how she was foolish to trust Peter? These two need a better storyline, perhaps working together to solve some type of mystery. As long as the mystery has nothing to do with Peter or Valentin that is. Unfortunately it seems Kiki has pulled Lulu into her drama with Bensch to write a story about it. This is not something I look forward to watching.

Finn’s father.
It was interesting seeing James Read as Finn’s father. I’m so used to his slimy portrayal of Clyde on Days of our Lives that seeing him looking clean cut and acting nice was a bit of a shock. Unfortunately, this is just another storyline that’s not doing much for me. Finn seems to have had a lifelong tantrum over his father remarrying too soon after his mother’s death and having another kid. Maybe there is more to it, or maybe Finn is the problem and not his brother and father.

Reasons why GH Needs to Focus on...