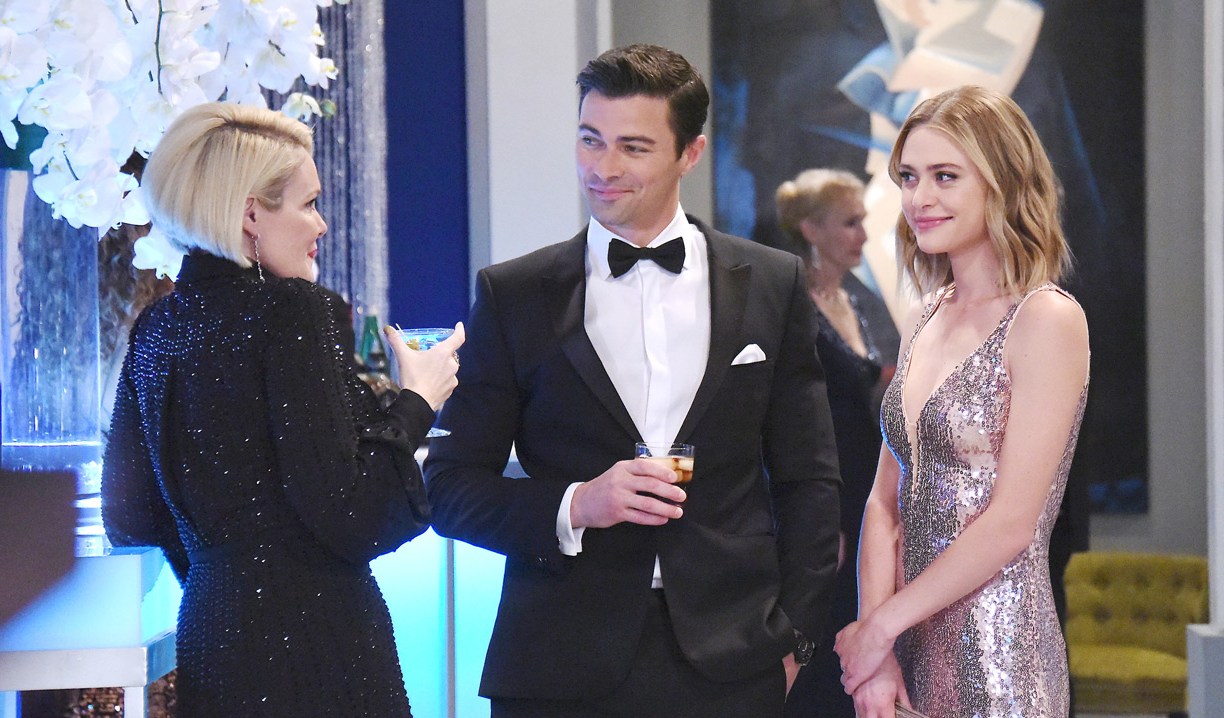 This week finally felt like a sweep’s week on General Hospital. The action, reveals and betrayals have been non-stop and intense. Let’s jump right in to the drama.

Saving the best for last.
The Nurses’ Ball came to a close with amazing performances. Sonny taking the stage to help his dad Mike through his number was touching, and it’s always fun to see Maurice Benard perform. Maura West brought the house down as Ava performing You Don’t Own Me. That was one of my favorite Nurses’ Ball performances in years.

Here we go again.
Ava once again jumped to the wrong conclusion when she saw Kiki being comforted by Griffin, read him the riot act and dumped him. Meanwhile, Kiki drank up a storm to stop thinking about creepy Dr. Bensch, who she finally confided in Michael about. She quickly promised him to secrecy. This was completely ridiculous because being on the hospital board, Michael should want to contain a possible lawsuit and bad publicity before it happened. But this is a soap after all. When Griffin later found drunk Kiki alone in the ballroom, one thing led to another and they ended up having sex. Guilt ridden, Kiki convinced Griffin to keep quiet. Are you kidding me? While many viewers have longed to see Griffin and Kiki together, now that he’s been with Ava it’s creepy multiplied by two seeing they previously shared Morgan as a lover. Are there no other storylines for Ava and Kiki other than fighting over a man? After this Griffin need not lecture anyone on their morals ever again, especially seeing he got it on with Ava the morning after sexing up her daughter.

I think I'm in the minority here, but I like Kiki and Griffin and I know it's gross because he's her mother's ex, but I think they are hot #GH

I can’t fathom a mother and daughter sharing lovers twice. Seems a little far fetched, but Kiki also slept with Michael and Morgan.

It’s about time!
The showdown between Anna and Jason on the pier after the whole truth about Peter/Henrik was revealed was epic. Peter’s true colors came shining through when he called Anna, “just the bitch who gave birth to him,” and tried to play Anna and Jason against one another. It was shades of his father and he is a chip off the old crazy block. I actually felt bad for Anna, who is going to have to come to terms with the fact that her son is not just some poor victim. It was good seeing her open up to Finn, but there was something so right about Anna going to Robert for comfort after all was said and done.

It’s about time, part two.
Finally realizing Peter played them both, Maxie and Lulu began to repair their friendship, and a furious Maxie asked her friend to help her bring Peter down. It will be good to see the two of them working together like old times, but that usually lands them both in a boatload of trouble.

Valentin in shambles.
As Peter’s secret was revealed, Valentin’s life fell apart. Nina packing her bags and taking Charlotte straight to Lulu really shows growth and maturity on her part. Anna’s confrontation with Valentin was amazing, and his excuse for giving Peter over to Faison because he thought Anna was a terrible person was pathetic. They should drop Valentin in a cell with Peter now that he knows only father figure in his life sold him out to Faison. Hopefully Lulu uses this to finally get full custody of Charlotte, especially since Nina told her that Valentin was planning to run off with them and never return. It’s doubtful that Valentin will listen to Nina’s advice that he leave town and Charlotte before she learns who he really is. He’s going to have to pull a rabbit out of his hat to win people back over, something big like revealing Nikolas is still alive. Yeah, I still haven’t given up on that idea.

That had to hurt.
Seeing Drew start to take charge of his life and reach out to his friends has been a nice change of pace from him just wallowing over Jason’s return and his life being blown to bits. His visiting Maxie in the hospital after having her baby and shaking Sonny’s hand at the ball to commend him for what he did for Mike were great scenes. However, when he informed Sam that he was getting his memories back his own way, without her help or the flash drive, and that he wanted to rid his life of everything Jason… man that was harsh. I could feel the proverbial gut punch that Sam must have felt in that moment. The fool is just pushing Sam into Jason’s arms at this point.

Jason is Carly’s only hope.
I noted in last week’s Deconstructing GH, Sonny not believing Carly was unbelievable. Now Diane, Joss and even Michael are falling for Nelle’s scam and believe Carly is mentally ill. Watching Nelle winning is actually driving me to a mental breakdown. At some point this schemer needs to pay. It would be great to see the tables turned and her driven insane and locked in an asylum for awhile. She should be thrown in with Heather Webber, but those two would likely only conspire against Carly together. With Carly agreeing to plead guilty by reason of temporary insanity, it looks like only Jason can get her out of this mess. I suspect Diane’s plan will backfire in a big way and Carly could end up the one locked up with Heather for life.