Deconstructing GH: The Nurses’ Ball Brings Drama and a Llama 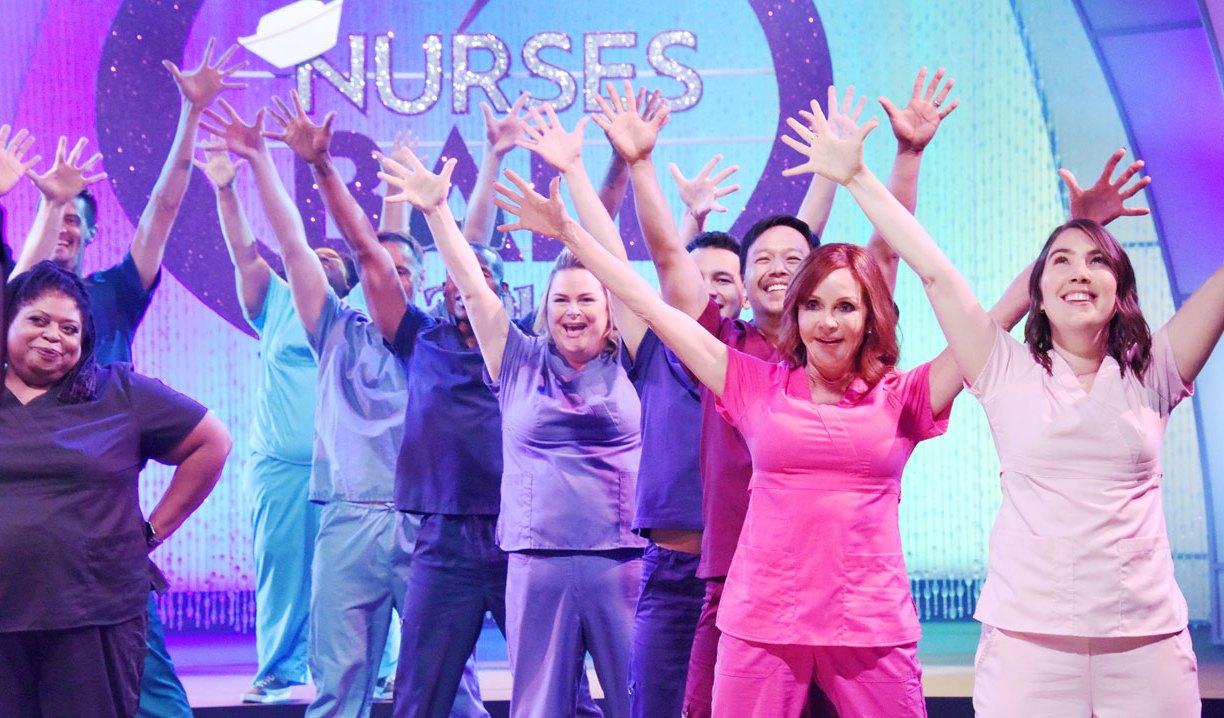 Carly’s in jail, Valentin is planning to go on the run, and Peter is in danger of being exposed. However, the show must go on no matter what. Welcome to Nurses’ Ball 2018!

No Nurses’ Ball for Carly.
It was no shock that after Nelle came to from her tumble down the steps that she immediately blamed Carly for pushing her. I’ve noted in past columns that this storyline has been downright awful, but the fact that Monica, the police and even Carly’s own children believe Nelle’s lies is insulting and idiotic. Many viewers on social media agree and are over this story and are looking forward to Nelle getting what is coming to her again.

Is it a stretch to hope Carly and Ava put their differences aside and team up and take down Nelle?? #hereshoping

SOMEBODY needs to reign in Nelle. It may as well be Ava! I want to see Nelle suffer! LOL #GH55

How did the town pariah and known liar suddenly become the victim? Everyone knows the lies Nelle is capable of. Monica’s hatred for Carly can partly be to blame for her blindness where Nelle is concerned, but Joss turning on her mother was unbelievable. Then there is Sonny, who knows Nelle’s games better than anyone. Why would he rather believe his wife is having a breakdown versus the possibility that Nelle’s setting her up and is behind the Morgan hauntings? Nelle needs to be exposed, but it doesn’t seem that will happen anytime soon. At least Ava was smart enough to take the baby blanket, which partly proves Carly’s side of the story, and is holding it over Nelle’s head.

You mean I had the power to go home all along?
For months now Drew has been led to believe by Andre and Faison’s will that his old memories are locked on a flash drive, which nobody knows Peter has, and they are his only shot at recovering his old life. Drew finally is ready to do that, and now all of the sudden Andre confirmed that the possibility of wiping his mind clean of Jason’s memories could bring back his old memories which may still be buried in his mind. Are you kidding me with this? It’s like when Dorothy is told at the end of The Wizard of Oz she had the power to go back to Kansas all along. Couldn’t Andre have said this months ago?

Cook II has a face.
The Quartermaine cook has been one of those faceless characters the family talked about, and from time to time you heard throwing pans around in the kitchen. However, we never saw cook until this week when The Chew’s Carla Hall was revealed as Cook II on GH. I don’t know how I feel about this. I always pictured cook to look something more like Trunchbull from Matilda. Hall’s portrayal just didn’t have that feisty mean streak or way about her that is Cook II. Now that she’s been revealed, will we see more of her character, or will she disappear back to the kitchen?

More: Videos of past Nurses’ Balls

Peter Henrik August Faison.
Another story that has had viewers irate since its inception has been that Peter is Anna’s long-lost son with Faison, who most feel she never would have had sex with. That Peter has been able to get away with his deception for so long is almost as infuriating as watching Nelle get away with her lies. Almost, because Nelle is still the worst. Fortunately it looks like his jig is up. He’s caught on that Lulu and Anna have reeled in him in using his mother, and Sam of all people found Faison’s lighter in Peter’s office. I couldn’t believe it when Sam’s PI skills actually paid off for once, and she connected the lighter to Henrik.

Unfortunately before Sam and Jason could confront Peter, Maxie convinced him to drive her home because she wasn’t feeling well. On the way her water broke, delaying Peter from meeting up with Anna on the pier per her plot to lure him out. Maxie sensed something was wrong with the baby, and naturally there wasn’t enough time to get to the hospital because they were out on that solitary road in the middle of nowhere that seems to connect everything in Port Charles. You know the one, the road all the bad things tend to happen on. This doesn’t bode well for Maxie’s baby.

The Ball.
As I said in last week’s Deconstructing GH, big things happen at The Nurses’ Ball. Even if you dislike the cheesy red carpet and the musical numbers, at least storylines move along. Not only is Peter’s identity on the verge of being exposed, but Finn finally confessed his feelings to Anna! He only did so because he thinks she’s dying after spying her will among Alexis’ legal papers, but at least he finally said it. A spying Alexis overheard and seemed hurt, which felt out of character for her because she and Finn were only together to try and move on from Julian and Anna. At no point did it appear that Alexis actually had developed feelings for him. However, a hurt Alexis gave Julian the push he needed to go to her, and Kim quickly took her date’s absence to zoom in on Drew. I liked Julian and Kim together, but it seemed obvious that Julexis was going to be the endgame and Kim would eventually be with Drew, especially if he gets his memory back.

As for the actual ball, the performances have ranged from fantastic to just okay. The opening number left me unimpressed compared to previous years, but Chase’s Dick Tracy inspired song and dance was great fun. Curtis’ magic skills could use a lot of improvement, but his proposal to Jordan was the real show-stopping part of his act. Ned and Olivia’s performance felt like more of the same from yesteryears, and Oscar and Joss were cute performing together. Valentin’s performance was absolutely amazing, and the Friday cliffhanger of Robert turning up at the ball and decking Valentin was great. But what is with Lucy’s llama?

As always these are just my opinions. Please leave your own in the comments.