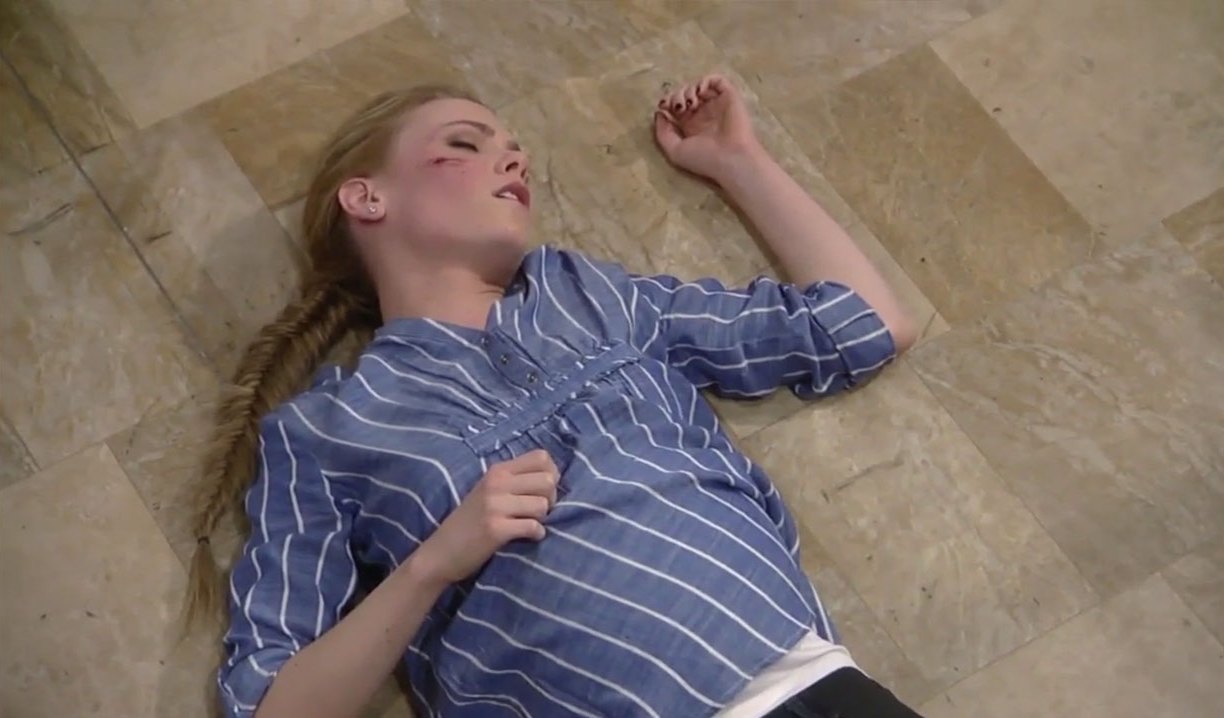 Love it or hate it, The Nurses’ Ball is around the corner. I enjoy it and find it good fun, but also know it’s when bombs get dropped and secrets revealed. Right now that’s needed because things continue to feel stagnant on this soap. Friday’s show finally started to pick up the pace after what has been a slow two weeks.

Hopefully that was the end of Jim.
I moaned in last week’s Deconstructing GH about Jim Harvey still being mentioned even though the character is dead. Franco met with one of his victims, who happened to be the VP of Harvey’s company, and he turned over the company’s capital to pay back the city and residents of Charles Street. Hopefully this is the end of Jim and this storyline. Though it still irks me that we have yet another mayor of Port Charles who got elected because of the aid of a crook.

All hail the queen!
I was shocked, but at the same time left in stitches, when in one episode Carly managed to show why she is one of the biggest hypocrites, and it will be hard to feel sorry for her when Nelle’s through with her. First she defended to Monica why she and Sonny had to use AJ’s alcoholism against him and take Michael away. Then she cried tears over Saint Morgan again, and how horrible Ava was for messing with his meds and causing his death. Finally she had the nerve to tell Griffin, who is still with Ava, that he is the worst hypocrite there is. Oh Carly, you should host a comedy night at The Metro Court!

She did. She hit the Trifecta of Sanctimonious Bitching.

Worst gift ever.
Nelle’s plot against Carly once again fizzled rather than exploded when she finally opened the gift from Ava, one she herself bought because she knew it would rock Carly’s world. It was a crib mobile with penguins on it. Carly, Bobbie and Joss were horrified because Morgan loved penguins. Carly immediately accused Ava, who didn’t know what the gift was, of using Morgan’s memory to stick it to her. I was stunned by the move I tell you. Stunned because it was so lame! Fortunately by the end of the shower, Carly finally got a clue that Nelle had been behind the Morgan hauntings. It took her long enough! Of course an argument led to Nelle tumbling down the steps in Friday’s cliffhanger. Nobody wants to see her lose the baby, but many viewers wouldn’t mind seeing Nelle out of the picture. With Chloe Lanier just winning a Daytime Emmy that is unlikely to happen. That child better be okay, because the last thing many viewers likely want to wactch is Nelle do a baby switch with Maxie’s child, which many have feared was the plan from the minute both wound up pregnant at the same time.

Playing nice, but for how long?
It was really great to see the animosity between Lulu and Maxie lessoning, with Maxie even reaching out and thanking Lulu for her and Dante’s donation to the police fund and asking her about her foot. In case you didn’t know, the actress Emme Rylan recently injured her foot. However, this temporary civility likely won’t last long with Lulu working on a story about Henrik and his mother. I’m looking forward to Peter being exposed so that Lulu and Maxie can both see how he played them for his own agenda.

Happy birthday kid!
Jason visiting Jake for his birthday was sweet, as was Jake reaching out to him. It would have been nice to actually see his siblings celebrating with him, but they are always nowhere to be found. The scene reminded me of last year and the Chimera Project when Jake was afraid of Jason’s face because of what happened on Cassadine Island with him and Helena. That got me wondering, was that Drew or Jason, and what did they do for Helena? Will we ever know?

Face-off in the gym.
Jason and Drew’s face-off in the gym was pretty damn tense. I always had hoped these two would be able to find a way to work together and be civil, but it seems that isn’t going to happen, at least not while Drew still doesn’t have his memory back to separate the two from sharing Jason’s. Fortunately Drew finally got a fire lit under his butt this week to work to reclaim his old life and memories. It’s about damn time! Of course, seeing this is GH it will probably take a year to happen. I really hope it doesn’t mess things up for Julian and Kim, because I’ve really begun liking them as a couple. Others are also torn, but some remain firmly on team Julexis, who I also adore together.

Nope. Julian belongs with Alexis. They are each other’s one true love and soul mate. They belong together.

I'm so torn because I like Kim with both Drew and Julian.

Valentin vs. Peter/Henrik.
Valentin sure became flustered when Peter threatened Anna, but he has no idea it was because Anna is his mother. It seems obvious that secret will come out when Peter does something to put Anna’s life in danger. My guess is that will happen at The Nurses’ Ball, because something always derails it.

Trouble ahead.
It was great to finally see Brad and Lucas back and in scenes together. However their constant mentions of not wanting a shower or celebration as to not tempt fate, and mentions of their kids playing with Nelle and Maxie’s, clearly foreshadow that things are likely not going to go well for either them or one of the other babies. I really hope nothing happens to ruin Brad and Lucas’ happiness, but if it does, I am sure somehow poor Julian will be to blame. Julian was so sweet to Lucas this week, and so eager to be a grandpa again. It was just one more clue that unhappiness is ahead.

Digging for dirt.
With construction set to begin in Crotan, Sonny and Jason headed to dig up the past and protect Sonny from going down for a 30 year old crime. Honestly, seeing how careless he was back then, I’m shocked he hasn’t fixed this problem long before now. When they dug all the way to the bottom of the grave, they discovered the body was gone and only a money clip remained. My money is on Mike moving the body long ago to protect his young son, and due to his Alzheimer’s he can’t remember what he did with the corpse.