Deconstructing GH: A Triangle Devoid of Fighting for Love 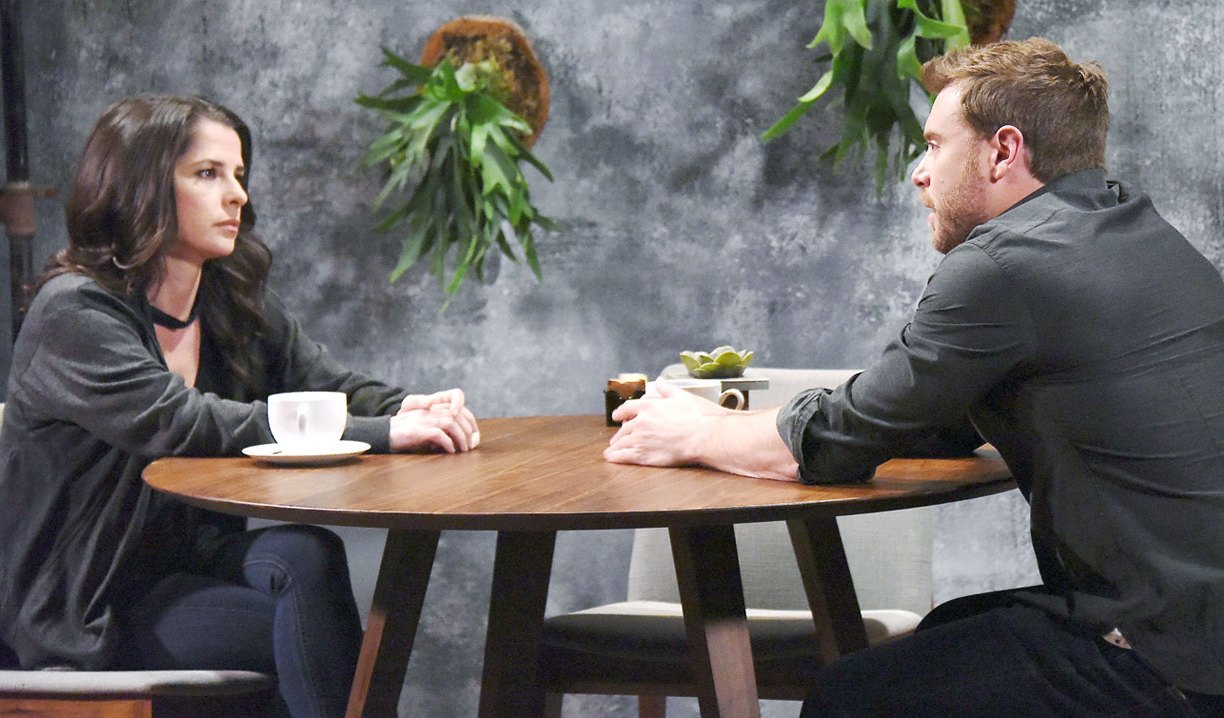 This week was fairly dull. I usually refer to this time as the lull before the May sweeps storm, the time during which the characters recap stories, and set plots up, but not much actually happens.

Let’s make a deal.
So Ava’s lie about extorting joint custody out of Sonny was quickly exposed by Griffin. Griffin went on and on about what she had done and how she lied to him. What Ava did was crummy, but as I discussed in last week’s Deconstructing GH, Sonny and Carly kept Ava from Avery to punish her for what happened to Morgan. So she did what she needed to do to get time with her child. All I could think about when he was lecturing her was that I couldn’t wait for it to be revealed that Griffin has known who Peter was all this time and for him to see the majority of Port Charles turn on him.

Crazy Carly.
Nelle finally has Carly doubting her sanity, and others are as well. This storyline isn’t working for many reasons, but the main one is that Carly hasn’t once suspected Nelle of trying to gaslight her. As it was pointed out by a viewer on Twitter, Carly is a lot of things, but she’s not stupid. That they’ve been writing her as such is infuriating.

Carly is selfish & hypocritical but she's not stupid! How can she not be even a little suspicious of Nelle?

Jason, also oblivious.
Jason is another character who can’t seem to see what is in front of him. Anna not only offered to pretend to be Henrik’s mother to lure him out, but she even laid out her actual sob story about giving him up which she claimed she made up as part of the bait. It’s amazing he still can’t figure out why she’s so determined to protect Henrik. Maybe his tight black shirts are cutting off the circulation to his brain.

Are we going to meet daddy soon?
Officer Harrison Chase hasn’t been on GH that long, but he’s already far more interesting than his half-brother Finn. This storyline with Finn’s animosity towards their father could actually help Finn’s character, who has been stuck in a boring rut since the departure of Hayden. They seem to be setting up the inevitable casting of their father. Hopefully they will land a great actor and this storyline won’t be a dud like Finn has become.

Let’s get a divorce.
Sam returned from her big Swiss adventure and is now ready to walk away from Drew and get a divorce without even a fight. That seems like a huge departure from when she was begging Drew not to walk away from her and work things out. Other viewers have also pointed out on social media that this triangle and storyline isn’t working because nobody seems to be fighting for their love and relationship. Sam indicated to her mother that she needs to learn to be herself and figure out who she is. Hopefully she means that, otherwise she’s just going to fall back into her old ways with Jason and take a backseat to The Sonny Show. It would be a shame to have all her growth just go down the drain and to rewind to five years ago.

I’m as confused as the #GH writers. This is the first triangle in soap history I can remember where there is no sex, no one passionate I love you frm anyone, no one is even trying to be together. If it wasn’t for fans loving their ship no one would know this a triangle.

I thought you were smarter than that Jerome.
Is Kiki honestly starting to second guess herself around that creep Dr. Bensch? Is she really falling for his lies? It seems like it! I thought Kiki was better than this. This storyline should have been over the minute he kissed her, because she should have reported him to HR. If Kiki doesn’t wise up she’s going to end up kidnapped and locked in a room in Bench’s place.

Have you donated to the Nurses’ Ball yet?
We get it, the Nurses’ Ball is coming. We don’t need to see Lucy badgering every character on a daily basis to donate or sign up to perform. A once a week mention is more than enough.

Let him rot in pieces.
Jim Harvey’s crimes were exposed and he was killed. He’s six feet under now and that should have been the end of the storyline. That Franco felt the need to give Harvey’s other victims closure was admirable, but why now does one want to meet with Franco about Harvey? Why continue to drag out a storyline that lasted far too long to begin with? The writers need to let this one go and have Liz and Franco move on.

Finally some action!
As Friday’s show progressed I found myself wondering, “Isn’t this supposed to be sweeps? Shouldn’t more be happening?” After watching Maxie wallow over what to do with the fund Henrik set up, and Joss try and convince Lulu to help her publish Oscar’s article, I was giving up hope of an exciting end to the week. Then out of the blue Valentin drugged Robert’s drink and boarded his plane. I’m shocked that Robert let Valentin get the jump on him like that, but at least something happened that will hopefully lead to the truth about Peter/Henrik being exposed.

As usual, these are only my thoughts on this week’s episodes. Agree or disagree, please leave your own in the comments.