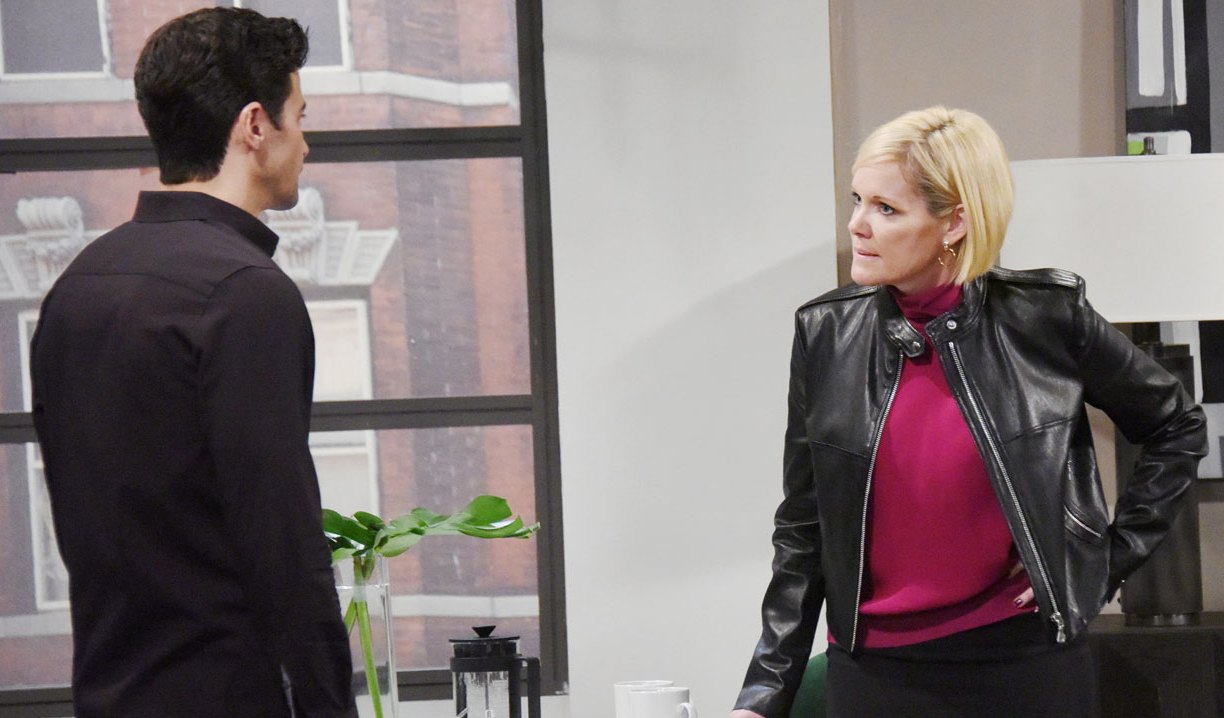 It was somewhat of a slow week in Port Charles, though May Sweeps and The Nurses’ Ball are around the corner and should bring some excitement. A little progress was made towards exposing Henrik, though not enough given how this storyline has dragged out. What seemed like a big story for Jordan fell flat, and Carly’s commitment looks to be coming. A big focus was on Ava, who went after Sonny with a vengeance.

Ava, she’s damned either way.
I have really been enjoying the change in both Ava and Julian. They not only distanced themselves from the Jerome organization, but from their old ways. Unfortunately, when push came to shove, a bit of the old Ava came out. She used Mike’s illness and vandalizing her gallery to score visitation time with Avery, and now after Mike disappeared with the little girl, Ava is going for full custody. It’s awful that she is using Mike’s illness to her advantage, no doubt about it. Unfortunately, she’s damned if she does and damned if she doesn’t. Had she played nice from the beginning, Sonny would have continued keeping her out of Avery’s life. All because Sonny and Carly blame her for Saint Morgan’s death, though they’ve both done things way worse. Some viewers on social media are equally as tired of this, and others really want the show to revive the possibility that Avery is Morgan’s child. I’ve thought that from the beginning and expected it to be revealed by now so that Ava could take her away from Sonny and Carly. As I said in last week’s Deconstructing GH, the constant mention of Morgan’s name is nauseating. However, I’d make an exception in this case just to see the look on Sonny and Carly’s face when they realize they have no right to Avery.

Ava is the new AJ. She's never really going to win because this show won't ever let Sonny and Carly lose. Whenever they SORAS Avery, she's going to be going on and on about how evil Ava is while Carly is a saint. #GH pic.twitter.com/kFjErvsW6z

I really want #GH to reveal that Morgan is really Avery's father & CarSon have no parental rights after all. The hinted pretty heavy that Carly switch the DNA test already. Just set it in motion.

A padded cell in Carly’s future.
With both Griffin and Kevin making mention of Carly’s history of mental breakdowns and commitment, it seems pretty clear where her storyline is headed. In spite of the fact that Dante traced the calls she was getting to the payphone near Morgan’s crash, Sonny and others will likely believe she is losing it and imagining being haunted by Morgan. I expect her to soon be thrown in the asylum. On the bright side, maybe she’ll get tossed in with Heather Webber. That would really drive her mad.

Sam should feel insulted.
It was bad enough having Carly constantly meddling in Sam and Jason’s lives and pushing them together, but now Spinelli is doing the same. Apparently, Sam’s friends think she can’t make her own decisions and feel the need to manipulate things and push her into being with Jason. Sam should really be offended at how little they think of her.

#GH Can people stop with the childish games trying to get Jason and Sam together? pic.twitter.com/SPomvsG30f

Henrik, Henrik, Henrik.
Next to Morgan, Henrik is probably the most mentioned name on GH right now. Robert finally figured out that Henrik was Anna’s son, and it only took spending 24 hours with her to do so. It’s hilarious that Jason and others in Port Charles haven’t figured out her obsession with the guy. Sam, Spinelli and Jason recovering the safe deposit box with the Cassadine crest was interesting, and it must relate to Valentin somehow. Robert suspected the same and confronted him, but of course Valentin played coy. Still, Robert finally began to connect some dots, knowing that Valentin was in Switzerland around the time Peter was born. An interesting shocker came on Friday with Robert suspecting to Anna that it was Valentin who handed Henrik over to Faison. But why do that when he also seems to have been protecting him for years? This storyline is utterly confusing and needs some resolution and soon.

Meanwhile, Sam learned Curtis was investigating Peter and demanded to be part of his investigation. Perhaps together they can make some progress in resolving this storyline. Then again, Curtis probably could make more headway on his own, because Sam will likely end up in a situation where she needs to be saved. Frankly, I’m looking forward to this blowing up in everyone’s faces when the truth about Henrik comes out. Poor Maxie and Nina are going to feel they’ve been played like fools, along with Lulu. In Lulu’s case it’s not hard to pull one over on her. Then there is Henrik, who will realize Valentin has played him for years, and Anna will see that Valentin was never her friend.

Really Lucy?
It had looked like some progress in the ridiculous Finn/Anna/Alexis storyline was about to happen. Anna was so close to spilling the whole truth to Finn about Henrik, only to have Lucy Coe crash their talk to beg them to appear in her damn Nurses’ Ball. Seriously? I hope Dr. Obrecht locks her in a closet this year and takes over the ball just for this. It would probably be a much better show with Obrecht in charge.

What was the point?
Viewers noticed Jordan’s cough for the last two weeks and assumed it would play into a storyline. It did, a lung cancer scare, which was over before it began when she got the news she was fine. Can the show not find a better use for Curtis and Jordan than this bogus story?

Why I Want Sonny and Carly to Go...