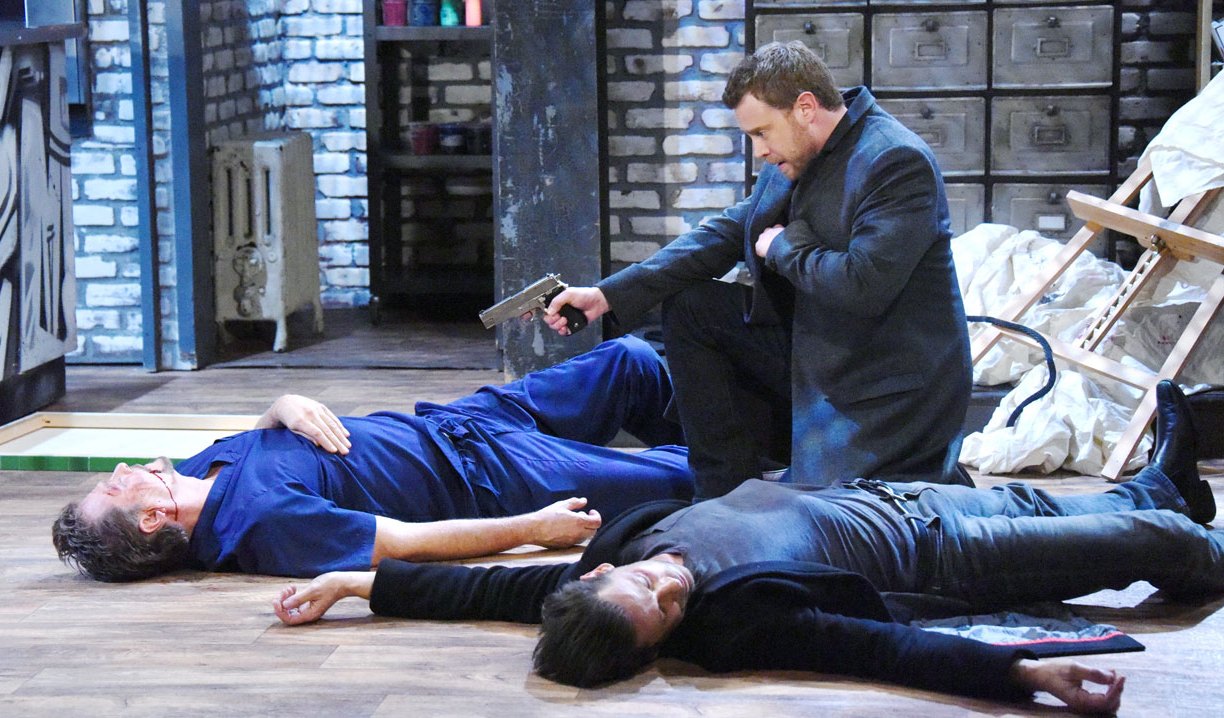 Jim Harvey’s storyline came to a welcomed end, Mike’s storyline took a disappointing turn, and far too many characters seem to have lost track of their brains.

So long Uncle Jim!
At long last Franco discovered the truth about what happened to him and Andy as children, as did Drew, and Jim is no more. While I wished Franco would have simply handed Jim over to the cops rather than drag him off to the studio for revenge, I understand the plot point because it allowed Drew to come to his rescue just as Franco had done for him as children. Hopefully Franco, Drew and Liz can all move on, and Uncle Jim will never be spoken of again! I do however hope that we won’t see the last of Drew and Franco’s emerging friendship. While some fans don’t understand how Drew can be friends with Franco seeing how he tormented Sam in the past, a point well made, Drew also has recently felt ostracized by everyone around him and I feel that’s made him more sympathetic to Franco.

The plan to oust Henrik.
The storyline involving Peter as Henrik has become ridiculous and makes little to no sense. Why has Valentin been protecting Henrik for all these years? Is it simply due to his obsession with Anna? Why is he still protecting him at this point? As I ranted in last week’s Deconstructing GH, Griffin protecting Peter’s secret is equally ridiculous, and hopefully Ava snooping into the test results will lead to the secret being exposed. One thing is for sure, ace journalist Lulu Falconeri isn’t going to get to the truth. It seems like Peter and Valentin have teamed up to throw her off the trail with a fake tip from a fake Henrik. Does this mean Lulu is going to report fake news? Nina hiring Curtis may also expose the truth because he seems to be the only one in Port Charles who solves crimes nowadays. Then there is Anna and Jason’s plan to run off to Switzerland to follow clues from The Severed Branch and take Emma along with them. Great idea to take your granddaughter on a super dangerous spy mission! Fans on social media lost their mind over this and see it as the further destruction of Anna’s character and what brains she has left. With Robert now involved, hopefully he’ll help Anna find where she’s misplaced her smarts and get back to being the badass spy we all know and love.

Haven’t watched yet so lemme get this straight. Anna is willing to endanger a child she adores to save a kid she’s couldn’t even look at, whom she believes is on a mission to eliminate her? Please, #GH #FixAnna because you’re doing it all wrong. Fans know the real Anna.

Let’s scare Carly to death.
Another set of characters who seem to forget how to use their brains are Carly and Sonny. Sonny believing Carly might be imagining or hallucinating rather than believe the evidence that Dante traced, including interviewing the homeless guy, seems out of character. Then there is Carly, who should have immediately suspected Nelle of being behind what is happening to her given all the other crap Nelle’s done to her. Carly herself has said someone was in her house and someone is doing this to her. Think Carly! And since when did Nelle become a master criminal, adept at using high-tech devices to haunt a house and an expert at avoiding security cameras.

1. No contractor will check a foundation crack after dark
2. Sonny has cameras on C’s ?
3. Carly would have immediately suspected it all was Nelle
4. Jason would have gotten truth out of the Angels Bluff drunk
5. Is Jos that dumb?
6. This whole Nelle thing is stupid annoying #gh

So it seems like they're gonna make ppl believe Carly is nuts since Nelle hasn't popped into anyone's head yet? I mean if some1 does something shady to me even once…I'll lowkey suspect them of every little thing that happens to me in life?? #GH

Maxie and Michael?
Michael and Maxie had some great chemistry at the baby birthing class, and it was nice to hear Maxie laughing again and seeing her enjoying herself. When Nelle walked in it looked like she was ready to tear Maxie to pieces. Be afraid Maxie, be very afraid! I’m not sure how I feel about them pairing Maxie with Michael, but she’s better than Nelle and he’s far better than Peter.

Mike and the mob.
I’ve really been enjoying the storyline involving Mike and his struggles, but now I find myself rolling my eyes because the writers had to go and drag Sonny’s mob activities into it. Couldn’t whatever Mike saw or know about in that field have been anything else other than Sonny disposing of a body for his old boss? One of the things that was refreshing about this storyline is that it wasn’t about Sonny and the mob. Now it looks like that is what it’s all going to become.

As always these are just my thoughts. Please leave your own in the comments.

Why I Want Sonny and Carly to Go...