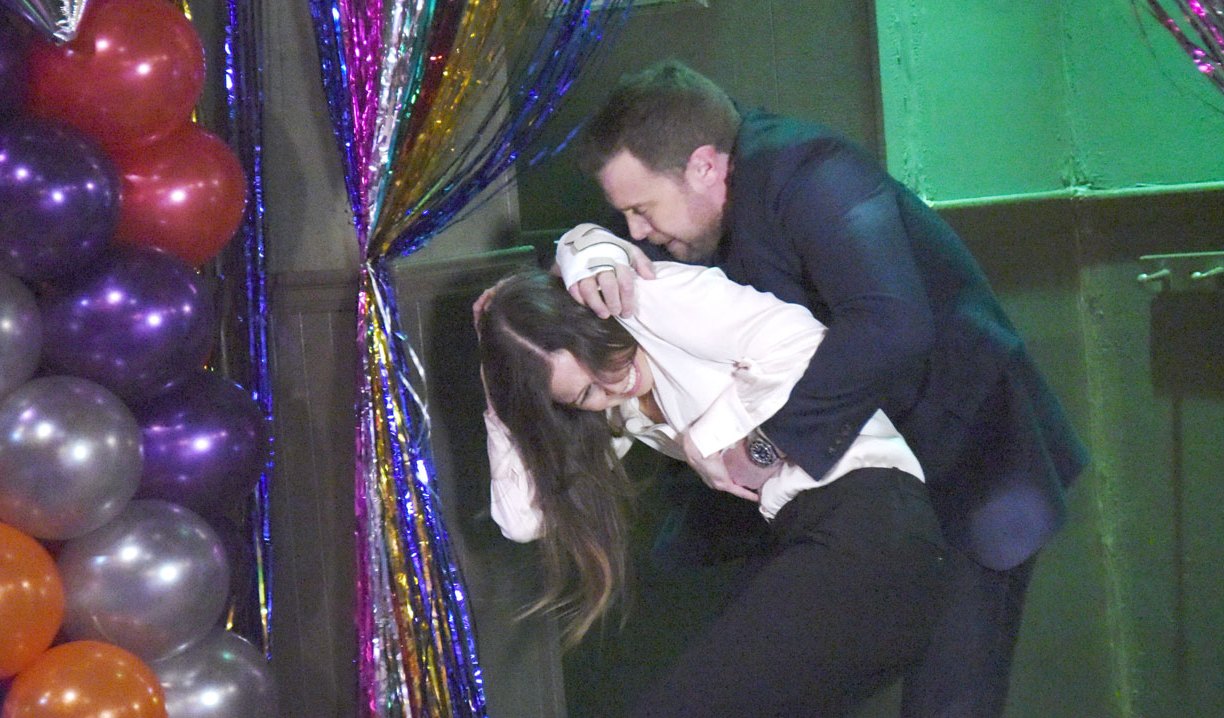 The earthquake hit Port Charles, and then the aftershocks came. Residents scrambled, lives hung in the balance, but nobody died? What’s a soap disaster without a death? And how did the quake happen? As I suggested in last week’s Deconstructing GH, Jim Harvey might have been fracking. Wouldn’t you know it, this week Olivia said that could cause a quake, which she of course learned by watching the Discovery Channel.

I now pronounce you, no I don’t.
Franco and Liz’s wedding was a bust after he got waylaid by confronting Jim. Then the quake hit, and eventually he turned up and all was right again thanks to some hospital shower sex. What? I am a Franco and Liz fan, but seriously, she needed to get some answers from him. It seems like all Liz heard was, “I saved Drew!” and she melted. Others on social media agreed, there was no real answers given or demanded. Fortunately after the quake-mania was over, Liz questioned him, but he still won’t open up about his secret. With Jim now telling Sam and Drew about Franco pushing Drew down the steps, hopefully Drew and others will realize he’s the one lying and this storyline can be put to bed.

So sad today. My favorite character on #GH disappointed me. She's been doing that lately but today was the worst. How the hell did she not blast him out for leaving her on their wedding day? Then she jumped in the shower with him. No questions.

Revenge, it will have to wait.
The only part of the quake that had me on the edge of my seat was when Jason came upon the trapped and helpless Franco. It was obvious Franco wasn’t going to meet his maker that day, but I loved that it was Sam who stopped him from avenging her and Michael. Sam’s words to him to stop living in the past and move on were powerful. However later it clicked in Sam’s brain when she learned Franco rescued Drew that had Jason not saved him, had they let Franco die, Drew would likely be dead. She was blown, and I honestly want to see Jason’s reaction to this as well given Drew is his brother.

The moment JaSam fans have waited for.
The entire point of the quake seems to have been, from a storyline standpoint, to force Sam to finally admit she still loves Jason. It took her long enough! On some level Drew knows the truth too. I’ve been waiting for this storyline to get good for months now. Assuming Sam doesn’t keep lying to Drew, it should get messy. Kim and Drew had some strong bonding going on over Oscar almost dying, so I can see her being a problem down the line for Sam and Drew as well. By the end of Friday things got even more complicated when Liz overheard Sam tell Jason she still hadn’t told Drew that she loved him. This after Liz just got done lecturing Franco about keeping secrets. What will Liz do?

Redemption week.
Not only was Franco a “hero” for saving Drew, Julian came to Molly’s rescue. She too was forced to admit she was glad Julian was around to help her, and you know that had to hurt. However we didn’t get to see Julian come to her rescue, we just got the explanation after. Seeing it play out would have made for good drama. The show should have made more use of the quake storyline for more of these types of scenes. Aside from bringing Jason and Sam back together, it just seems the quake’s other purpose was to redeem some of Port Charles most hated citizens.

Carly opens her heart to Mike, but not Nelle.
Sonny and Mike’s scenes continue to be amazing and pull at the heartstrings. Carly insisting Sonny move his dad in and spend what time he had left with him was really touching. Sonny wondering why she cared since Mike always liked Brenda over her was a tad cold, but good for a chuckle. It’s clear Sonny is having a hard time dealing with this. Meanwhile, Michael seems to be getting reeled back in by Nelle, making me wonder how he is Carly’s child. Carly ordering Amy to whisk Nelle off to be examined in order to keep her from Michael, and later reminding Michael to stay in bed and rest instead of checking on Nelle, was hilarious.

More: Hayley Erin in The Perfectionists

Anna’s not so shocking son.
Over in Europe, Anna learned what viewers have always suspected, that Valentin lied to her and she did have a son. We also found out it is Peter, because his birthday is the same day that Anna admitted to the midwife’s daughter that she gave birth. On some level it’s satisfying to know ones suspicions were correct, but there is a disappointment involved because the storyline was predictable. Many viewers are still having issue with the idea of Anna having a child with Faison at all.

I’ve watched Anna Devane since the days of Casey the alien and I’m so sorry but this storyline of faison and Anna kid doesn’t fit! Doesn’t work! And it’s not good. #GH

Creeper Peter.
Peter’s sudden fascination with Maxie is creepy. Is he simply feeling guilt over his brother’s death and wanting to take care of Maxie and her child? Is he truly concerned seeing they both might have Huntington’s Disease? Or are we seeing the birth of a new Faison/Anna obsession, only with Peter and Maxie?

As always these are just my thoughts on this week’s episodes. Agree or disagree, please leave your own in the comments.