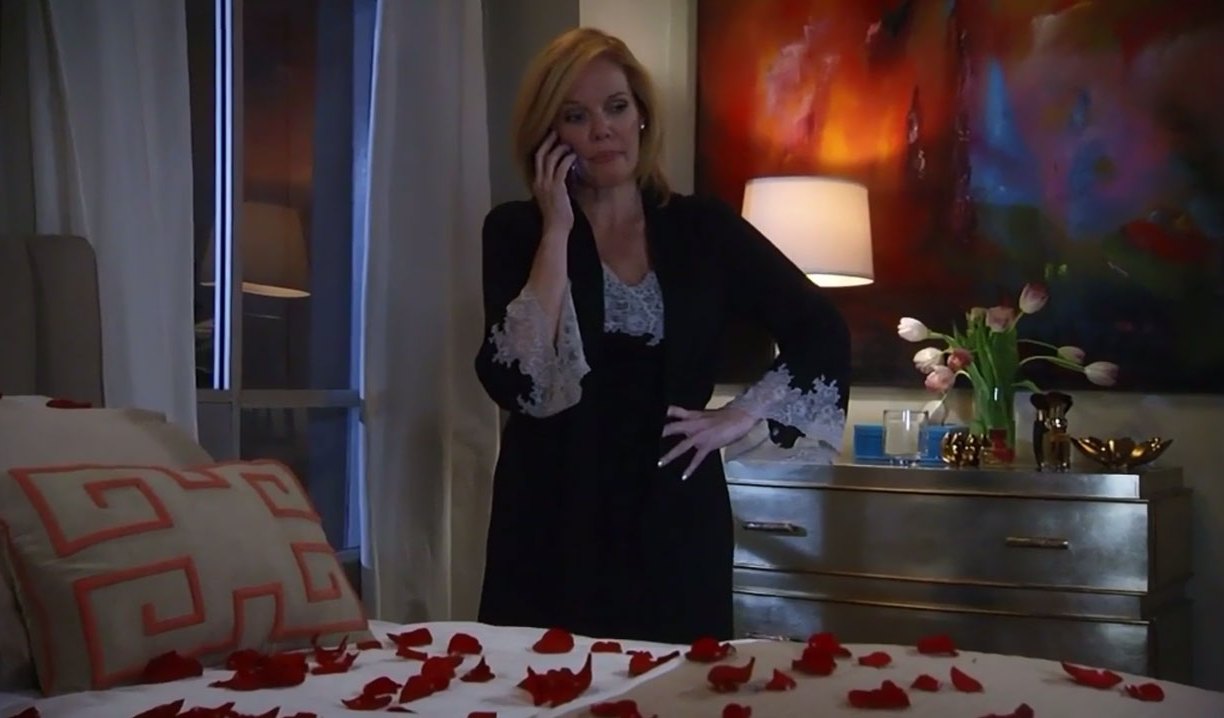 It was Valentine’s Day week, which should be about love and romance, especially on a soap. The week began with the end of Nathan’s funeral, which definitely put a damper on the romance, but the damper seemed to last the whole week. Mike’s memory issues didn’t make for the merriest time either. Many residents tried, but failed to celebrate the special day.

Lashing out at Lulu.
After Nathan was laid to rest, Maxie unleashed holy hell on Lulu and blamed her former bestie for killing her husband. For many viewers seeing Lulu taken down was long overdue because Lulu had been acting like she could do no wrong for so long. Still, as I discussed in last week’s Deconstructing GH, seeing Maxie and Lulu’s friendship fall apart is heartbreaking. While Maxie was taking Lulu down it was hard not to notice Nina and Valentin watching with a look on their faces like, “Damn, wish we had some popcorn for this!”

Who is Peter to Valentin?
Valentin once again urged Peter not to leave town and told him that he had always looked after him. So why does Valentin care? It’s likely that Valentin lied to Anna about having a girl and Peter is Anna’s son. Many viewers don’t want to see Peter turn out to be her kid, and others think Claudette is Anna’s daughter. That is a theory I can get behind and would explain why Valentin sought Claudette out as an adult due to his old obsession with Anna.

As much as I think that he is lying, I'd prefer it if Peter wasn't Anna's kid

Drew and Jason vs. Franco.
Franco’s worst nightmares seem to be coming true what with both Drew and Jason on his case. Franco and Jason had a tense exchange over Jake, but it was Drew’s questions about their past, Jim Harvey, and his fixation on the rabbit’s foot that really got to Franco. The mystery of Franco’s childhood was interesting at first, but it’s been dragged out for far too long. Unless a huge twist is planned, nobody is going to be surprised when it’s finally revealed Jim Harvey was the one that pushed Drew down the steps, and probably terrorized both kids when they were young. I wouldn’t be shocked to find out he also orchestrated the mugging/set-up of Stella knowing she was a vocal opponent against his redevelopment plans.

Rabbit’s feet and bar brawls.
Not only did the rabbit’s foot seem to spark something in Drew, but he was intrigued by Kim’s story of him saving her years ago from a creeper at a bar. Drew definitely seems more relaxed talking with Kim and hanging out with her and Oscar than he is when dealing with all the issues surrounding Sam and Jason. Sure, it’s a nice distraction from the mess of his life with Sam and his brother, but I wouldn’t be surprised if Kim jumped on the first moment of tension between Drew and Sam to get closer to him.

Un-romantic Valentine’s Day.
Valentine’s Day in Port Charles was the pits. I mean was it too much to ask for one day of carefree happiness? The drama could wait until the next day. But no, we got a mess of a show. Carly and Sonny’s evening was hijacked by Mike’s memory issues and thinking he still worked at Kelly’s. Kiki got drunk over the loss of Dillon and threw herself at Spinelli, which made zero sense. Griffin and Ava’s night was ruined by Griffin rushing to Kiki’s side, and Ava obviously isn’t over her suspicions that the doc and her daughter have something going on. Then there is Finn and Anna, who can’t seem to get their stuff together and tell each other how they feel. However, at least Finn and Alexis’ bonding felt fresh and easy, and if Anna isn’t careful she could quickly lose Finn to Alexis.

Morgan, Morgan, Morgan!
Just last week I ranted that Morgan is the character that won’t die and is often mentioned more than those still on the show. Well it appears that Nelle is planning to gaslight Carly and convince her Morgan is still alive, or is haunting her. Can’t we be done with Morgan?

Faison’s will.
Anna, Sam, Drew and Jason gathered for the reading of Faison’s will. Faison left Drew a way to restore his memories, and Jason last the known whereabouts and alias of Henrik. Unfortunately both are locked in a safe, and will only be delivered to them when one of the two brothers is dead. Wow, talk about a nasty twist. I really hope the brothers don’t turn on one another, but that leaves us stuck hoping Jason, Drew and Sam can solve the mystery on their own. That will likely take the trio several decades. On brighter note, perhaps this will see the return of Andre given he developed the memory mapping technique. Hey, if Sonny can get all charges dropped against him for saving the warden’s daughter, Andre can work out a deal too.

These are only my views on this week’s episodes. Agree or disagree, please leave your own thoughts in the comments.

Deconstructing GH: A Touching and...