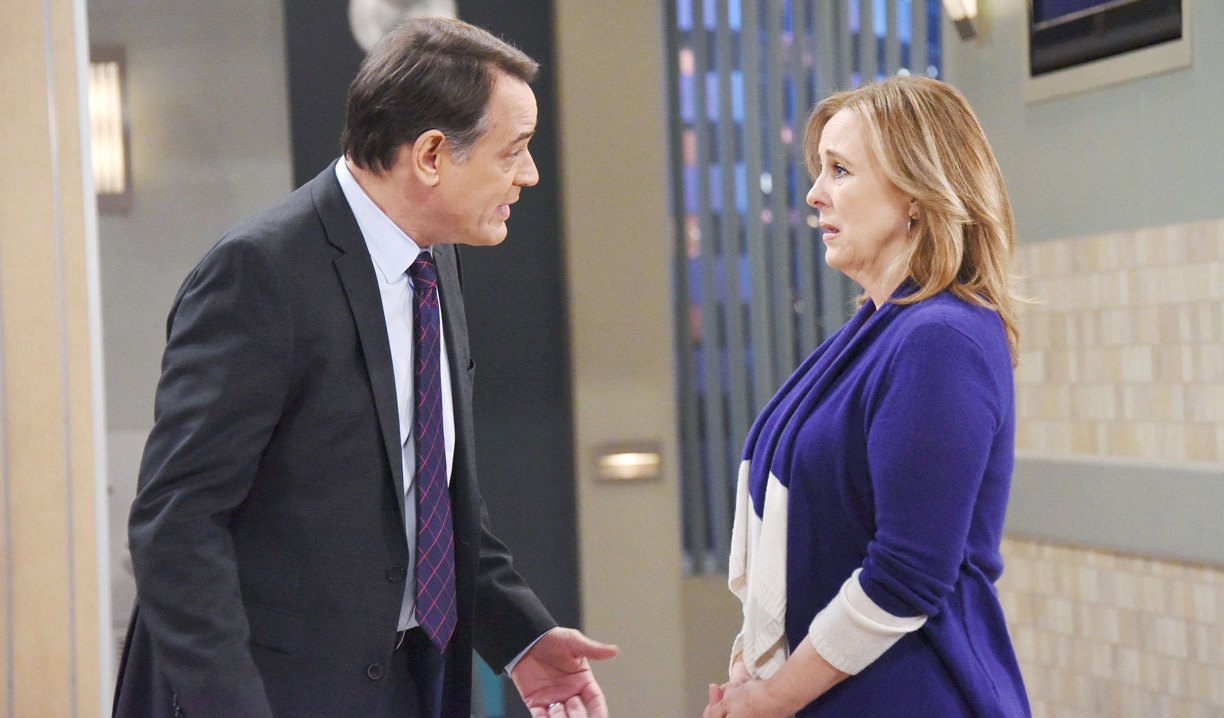 It was an emotionally packed week in Port Charles. Between Laura abruptly leaving town, and Faison shooting his own son Nathan, I felt drained by Friday.

Mr. and Mrs. Cain.
Drew and Sam went through with their wedding, which I’m still not sold will last long. I noted in last week’s Deconstructing GH that Sam didn’t look very happy before her wedding. In the moments leading up to saying, “I do,” she was thinking about Jason. My favorite part of the episode was oddly Monica telling Drew she wanted to adopt him to make him officially part of the family. Their relationship is adorable and sincere.

Maniac on the loose. Faison was all over Port Charles this week, which was pretty hilarious seeing the entire police force, state troopers, and the FBI are all trying to find him. Lulu walked right in on him holding Obrecht in the stables of Wyndemere, and got herself locked up with the doctor and a deadly chemical weapon. Well, at least Lulu lived up to expectations and totally bungled catching Faison.

Faison’s obsession with Anna is still alive and well, even though last time he was apparently over her given she locked him in the catacombs of Wyndemere. Time heals old wounds I guess. Finn has some big balls standing up to Faison and telling him to look at himself in the mirror because Anna was way out of his league. That was a hilarious line. Seriously though, Faison could at least get a proper shave and comb his crazy hair. The flashbacks Anna had, if only brief, of her past with Faison were great.

Faison eventually ended up at Peter’s office, but before they could really talk, Maxie waltzed right into Faison’s hands. Damnit Maxie, aside from putting yourself in danger, you ruined the inevitable reveal that Peter is Henrik, Faison’s other son. My anger over that was gone though when Nathan walked in was shot by his own father. Not detective sexy! Faison was soon shot by Jason, and both Faison and Nathan were barely hanging on as Friday’s show ended. What a cliffhanger! Meanwhile Peter seemed to head to meet Anna, who was waiting for Henrik, which seems to confirm he’s Faison’s son. He oddly appeared unmoved over what happened to Nathan, and he didn’t seem to feel the need to tell Jordan or anyone what happened until he was stopped trying to get out of the Metro Court. He was only fixated on Faison and getting to his meeting. If Faison dies, I’m willing to bet his son takes over where his insane father left off. Something is not right with him!

The return of Lucas, without Brad, again.
Lucas made his return to Port Charles, once again without his better half, and officially revealed to Carly and Bobbie that he and Brad were planning to adopt. Valerie dropped the hint months ago, but we never heard about it again. This would be an amazing story, if the show would allow it to play out.

The Sonny show.
Viewers on social media were a bit miffed that Faison’s story is being made about Sonny, or at least in Sonny’s head. He believes Faison stole Jason and put Drew in his place because Faison wanted to get rid of Sonny. Seriously? Hopefully he is wrong, because they are completely leaving out Helena and Victor Cassadine’s part in the Jason swap. Likewise, viewers were insulted that Sonny had the gall to explain to Anna how to deal with Faison.

The sheer audacity of #GH putting Sonny at the forefront of this Faison story and having him mansplain to Anna about catching the man SHE IS AN EXPERT ON. The mind boggles.

How has this Faison story that was originally about Anna/Nathan/Maxie/baby become all about Sonny? Why is Sonny explaining to ANNA of all people about how Faison needs to be taken down??? #GH

Laura’s ridiculous sendoff.
Fans were floored this week with Laura’s abrupt departure from Port Charles and their televisions. After months of seeing her and Kevin only sporadically, the couple finally got married and Laura putting her hat in the ring to run against Ned for mayor seemed to signal a real storyline for the couple for a change. Then a phone call that Spencer had broken his legs and she’s out of the race, off to France, and off the show. A rep for Genie Francis has confirmed that she was dropped from her General Hospital contract to recurring status, and it’s unknown when she’ll be back. Viewers have taken to social media to vent their frustrations and demand Francis be put back on contract with the show. Given the show is gearing up to celebrate 55 years on air in April, dropping one of the best-known and loved vets is a bad publicity move. Fortunately, Alexis took the reins from Laura and has decided to run against Ned, but it’s just not the same. Laura would have made an amazing mayor.

Genie Francis is a powerful presence on screen. Her natural, compelling, intense acting skills have made her a legend! What the hell are you thinking #GH? #GenieIsGH pic.twitter.com/pdBFuDf3kY