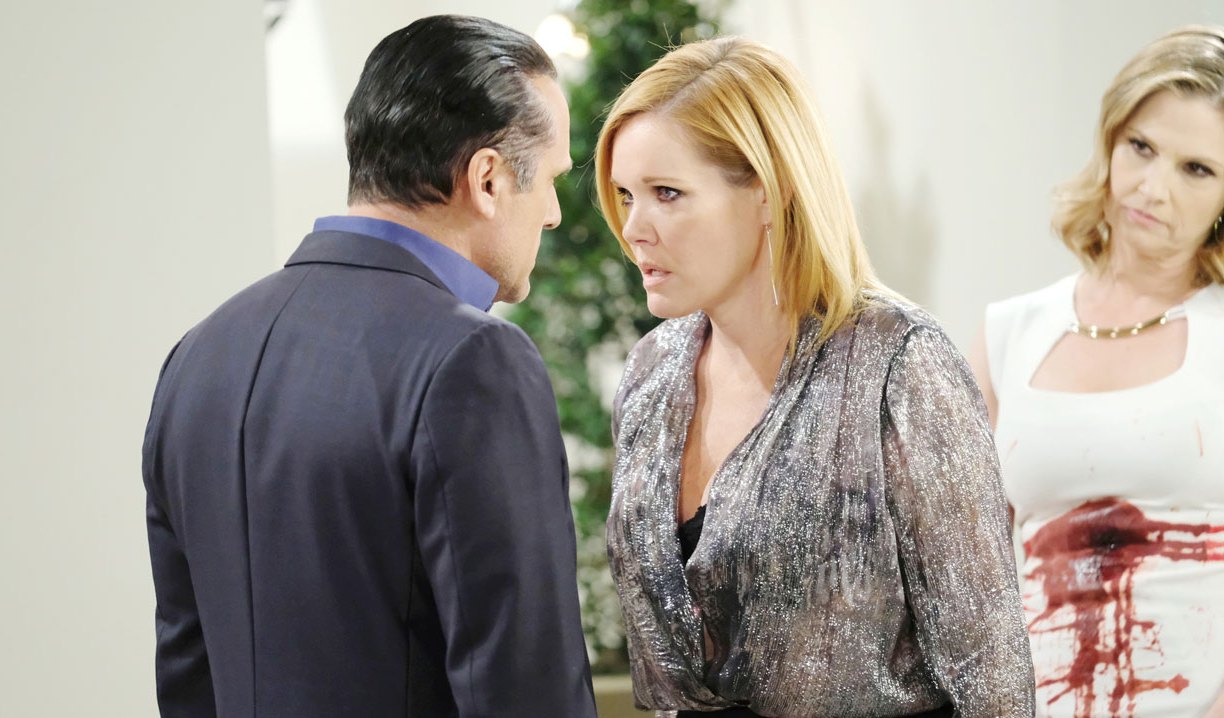 Ava’s standalone episode brought back some fan favorites, though they were only ghosts in her head. Fortunately another fan favorite, Faison, made his way back to Port Charles in the flesh. Hopefully viewers will soon get answers regarding the Drew/Jason swap.

Truth Bombs.
Diane and Ava dropped some much needed truth bombs in the beginning of the week, with Ava pointing out how Alexis couldn’t keep her eyes off Julian and Kim. For a recovering alcoholic who claims she’s over her ex, she sure spends a lot of time in his bar! Later Diane gave Jason a needed dose of truth that his distancing himself from Sam and giving her what he thinks will make her happy, in this case a divorce, won’t because they both still love each other. Sam’s breakdown over being in love with two men at the same time is long overdue, and Jason’s lack of fight for Sam is getting old. By Friday, Sam and Drew were getting ready to be married, but Sam sure didn’t look like a happy bride. She looked like she wanted to cry as she began to dress.

Proper parenting.
It was really nice to see Liz and Drew sit Jake down and explain he was lucky to have both Drew and Jason in his life, and there was nothing wrong with him getting to know Jason. Of course, many viewers have pointed out that this push for Jason to be part of Jake’s life is ignoring history, because Jason stepped back and let Lucky raise Jake as his own. Jason never entered Jake’s life until Drew did, and that was because Drew didn’t know who he was at the time and was in a relationship with Liz.

When did Jason become a father to Jake.. ? the only father Jason has been to is Michael… Stop with the rewrites #GH Jason gave up his rights to Jake and has not established any nor has made the effort to change it! #LuckyComeGetYourKids

Carly and Kim were also doing some great parenting this week in talking to their kids about sex. Kim admitting she was secretly thrilled over the condoms, because it meant her safe sex talks had got through to Oscar, was a nice way to lighten a serious talk. I admitted in last week’s Deconstructing GH that the Oscar bullying storyline, and Joss and Oscar seemingly planning to have sex, wasn’t exactly thrilling soap material. This week I was pleasantly surprised when Joss revealed a friend was being bullied for how she identified in terms of her gender, and she and Oscar were risking suspension from school for planning a non-sanctioned school dance where everyone was welcomed to attend and dress as they identified. Carly supported Joss, and hopefully we will find out how this storyline plays out and it wasn’t just a quick feel-good moment that was mentioned and will be forgotten.

Crazier than Nina and Franco combined!
Nelle dreaming that she and Michael may still have a future together as a family with their baby was just plain nuts. Ava dropped another one of her truths on Nelle, pointing out the Corinthos family never forgives or forgets, so she needs to stop deluding herself and get on with her life. Word! The standalone episode where Ava was forced to face the sins of her past was excellently written and acted. Viewers were treated to surprise appearances by Bryan Craig as Morgan Corinthos and Megan Ward as Connie Falconeri. The best part of the episode was Ava lashing out at everyone for the fact they’ve all done horrible things, and refusing to be the only one constantly punished for what she’s done seeing everyone else has been given a free pass. It would have been great if she called Sonny out for murdering AJ, something everyone seems to have moved past except Monica. Co-head writer Chris Van Etten revealed on social media his hope that in the future they can do more of these character-centric episodes, which would be amazing.

“You abused your wife!”-Ava to Julian

“You switched Michael’s meds, just like I switched Morgan’s”-to Kiki

“Bodies lie in your wake for the sake of your business.”-to Sonny

“I am no worse than anyone in this room!”

I'm totally committed to doing episodes like this for every member of our wonderful, inspiring cast. It's just a matter of the story and stars aligning. #gh

The traitor and the trap.
With the story planted in the paper about Nathan being Faison’s son, and Sonny and Jason contacting PK Sinclair and offering to help him kill Faison, aka make the ending of his book happen, the traps have been set and the game is on. It was great to see Anna back and working with Sonny on the Faison front, and revealing that his son’s name is Heinrich Faison. What didn’t make sense is that Faison, who had the kid with another woman, basically threw his son away. Haven’t we been told Faison wanted a son more than anything?

Thursday’s episode showed someone with long grey hair reading up on Anna, Nathan and Maxie, while smoking some fancy cigarettes. While it was clear the show was hinting this was Faison, it was obvious it was someone in a really bad wig. I really thought it may be Peter August, aka Heinrich who is obsessed with his father, dressing and acting like him. However the news broke that Anders Hove is back as Faison, so it likely is him. It would still be interesting to have Peter throw on a Faison mask of his own as a twist on his father’s tricks. The second Jim told Franco he remembered little Andy, who he thought was dead, and then grilled Ned for information on him, it was like a flashing red danger sign. It seems likely it was Jim who pushed little Andy down those stairs all those years ago, and perhaps did worse things to both Andrew and Franco as kids.

These are just my thoughts on this week’s episodes. Agree or disagree, please leave your own in the comments.