Deconstructing GH: Miracles and Grinches Just in Time for Christmas 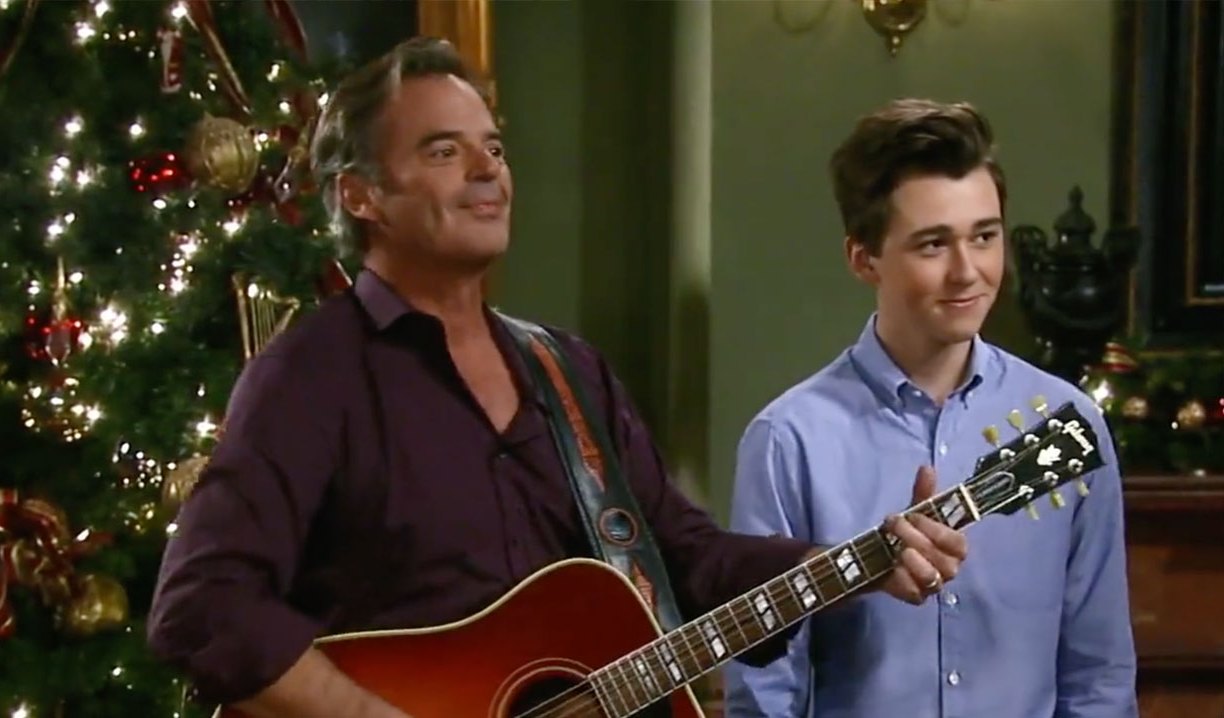 The holidays were in full swing in Port Charles. Mayor Lomax (played by Shari Belafonte) returned to play the part of Scrooge, Sam and Jason reflected on their Charlie Brown Christmas tree, the Corinthos bunch took a stroll down memory lane, and the Quartermaines sang before they ate.

So close, but no cigar.
Franco almost came clean with Liz, admitting to what honestly was the bigger of the two lies of omission, that he knew who was Drew and who was Jason all along. However, fearing she would think he was a monster, he didn’t tell her about supposedly pushing Drew down the steps as kids and almost killing him. I’m still not buying that one because Betsy didn’t see it. If Drew ever gets his memories back I wonder if he will remember what really happened?

Disco giveaway.
How Anna’s housekeeper mistook a disco ball for a Christmas ornament is beyond me. Even more bizarre is how someone knew Andre hid the flash drive with Drew’s memories in it, and that it would happen to end up in the box of ornaments that Anna donated so they could steal it.

More: Jack Wagner in When Calls the Heart Christmas special

Proposals and bromances.
I really liked that Drew took a step back and told Sam it wasn’t fair to ask her to marry him, because she deserved to know who he really is. Of course, that didn’t stop Sam from proposing a day later, and the next day Drew had a brand-new ring for her. Sam just seems determined to focus on Drew and try and pretend the Jason problem isn’t an issue. I loved that Drew was the one that suggested they tell Danny the truth, and Danny took it like a champ. The nods that Jason and Drew gave one another after was everything. I’m shipping their bromance more than I am Jasam or Dream at this moment. Team Jasew?

The Charles Street gentrification.
I was puzzled in last week’s Deconstructing GH by Julian’s sudden purchase of Charlie’s Pub. Well now we’ve learned it is in the heart of the Charles Street district, where Molly, TJ and Stella live. Ned is pushing ELQ to develop the place, and the residents are fighting the gentrification of their neighborhood. Julian is now smack dab in the middle of this conflict. Is this how they are going to try and make Julian out to be a good guy? By having him fight for the little people? Puh-leeze! I wasn’t impressed, and neither were others, but I did find my heart warming a little by Friday’s episode. Some though are enjoying the show tackling a more realistic storyline for a change.

I am here for a gentrification story that pits Davis/Ashfords/Laura&Kevin vs Quartermaines/mayor/ and probably Cassadine. Seriously, keep the mob out of this and I am here for it. #GH

If they really want people to beleive that Julian has changed; a little remorse for killing Griffins father might be a start. ??‍♀️#GH…also don’t like they have distanced Anna and Griffin.

The Obrecht bunch.
Fortunately, the Britch seemed to have one last scene before she was sent to jail pending her trial, and that was with her mother. Obrecht warned her not to betray Faison, because he wouldn’t hesitate to kill his own offspring. At the same time Nathan believed that his mom had lied to him about Victor Cassadine being his father, though Maxie couldn’t imagine why she’d lie about that because she can’t think of a worse monster. Well that was a not so subtle hint that Faison is likely Nathan’s dad.

Christmas in Port Charles.
Monica welcoming Oscar and Kim for the Quartermaine Christmas was touching, and Drew reaching out to his son was a great scene. Unfortunately Ned’s obsession with protecting ELQ and worrying about the stocks is getting old fast. Poor Michael won’t see it coming when Ned pulls the rug out from under him and takes over.

Jason and Sam reflecting on their first Christmas tree was a great flashback. Sam needs to get herself into Kevin’s office and fast before she has a meltdown trying to deny she’s in love with two men and doesn’t know what to do about it.

Speaking of Kevin, his and Laura’s bad-luck wedding was a little underwhelming. While it was great to see Denise Alexander return as Laura’s mother Lesley Webber, it stank that Spencer couldn’t be there. Having Jonathan Jackson return as Lucky was a long shot, but why was there no invite for Liz, Jake and the other kids? And why, other than she’s Lulu’s best friend, were Maxie and Nathan there?

Alexis, Molly and the Ashfords joined Ava and Griffin at Julian’s new pub thanks to power outages and freak snowstorm trapping them. Julian and Griffin’s bantering, and Auntie Stella harping on Jordan got old after the first five minutes. Molly and TJ skipping out on their awful family and heading to volunteer at the homeless shelter was pretty funny, especially since nobody seemed to realize they were gone. Eventually they returned with news the homeless shelter wasn’t able to keep up with the inflow of people. Julian did the noble thing by opening up his pub to feed and house people for the night.

With nowhere to go, Nelle ended up at the Corinthos place and fainted into Michael’s arms, which I’m sure was faked. Nelle’s appearance ruined what was a fairly entertaining two days of Christmas episodes.

Deconstructing GH: A Nice Glimpse of...