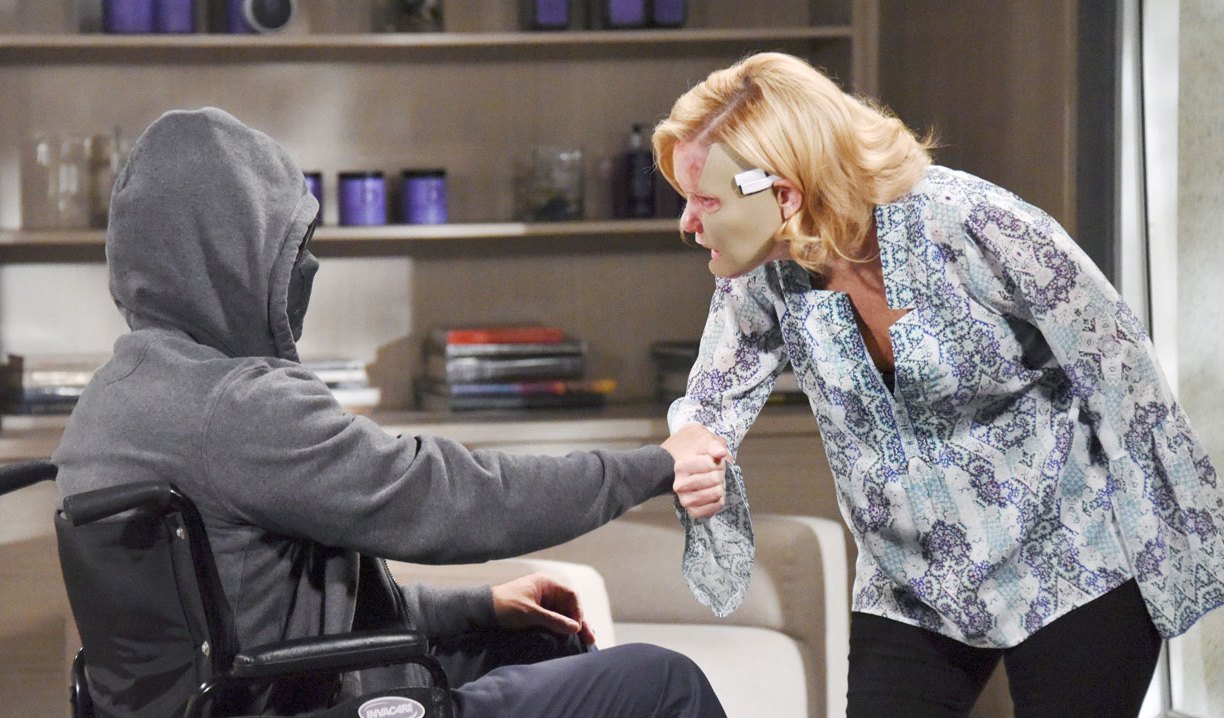 It was another slow week in Port Charles. There were far too many conversations we’ve heard before, characters discussing what happened earlier in the week, and generally stalled storylines, save for Patient Six. The final moments of Friday finally served up some delicious bits.

If we could get some answers that would be great.
First Heather was a no show, then Betsy ran out on Franco at his gallery opening, and finally Scott urged his son to forget about the photo. I had hoped in last week’s Deconstructing GH that we’d get answers about the photo of Franco and Jason, and I guess I should have known having it happen so fast was too good to be true. This has dragged on for weeks, and Steve Burton being revealed as Patient Six means it will likely be several more weeks before we get real answers. Friday did give us some teases though with Franco cornering Betsy, who admitted there was a twin, but it wasn’t Franco’s.

Patient Six, please remain seated!
Patient Six had a violent reaction to Ava saying the name ‘Nikolas Cassadine,’ and she wondered for a split second if he could be Nikolas. When he finally revealed his face and it was confirmed he was Steve Burton, that seemed to dash any hope he was Nikolas. I still remain in the camp that Billy Miller should continue to play Jason and Burton should be someone else. What if he is Nikolas? I wouldn’t put it past Valentin to have orchestrated it for the clinic to give him Jason’s face just to stir up trouble. Then again, Ava dismissed he was Nikolas because of his brilliant blue eyes. He did manage to signal to Ava that while he had a family, they weren’t waiting for him to come home, and they are not the ones who put him in the clinic. He clued her in by writing down a phone number that he is from Port Charles. It definitely seems like he is Jason’s twin.

Yeah, we get it, we really get it.
I honestly may scream if I have to sit through one more episode of Sam, Carly and Sonny discussing how different Jason has been since he came back from the dead. We get it, you are setting up the two-Jasons storyline with Burton’s return. These three should take their personal issues to Facebook like everyone else and stop hogging the airtime with their repetitive dialogue!

Dear #GH, Please stop with this "Jason is different" crap. We watched OLTL try this with Todd/Victor. We saw how it ended #canceledshow pic.twitter.com/g5JzryH4WB

Anna and Finn, superspies.
I didn’t like Anna blackmailing Finn into helping her, which I thought was dirty and low, but these two do work well on-screen together. I was thrilled to see Jessica Tuck on General Hospital as Cassandra Pierce, as I’m a huge fan of hers. Others on social media weren’t so excited that the show was bringing on yet another actor when the cast is already too large. One even joked that “GH” was becoming the “One Life to Live” unemployment line!

Unless she is the mother to Elizabeth she's not needed… we need to get rid of the bloatedness already! https://t.co/hRrfUeN0Ef

Shriners Hospital for Children.
The Shriners storyline for Charlotte’s friend Bailey was cute, but like much of this week a bit uneventful. It also came off more like a commercial for the hospital than a soap storyline. In the past at least the kids going there were involved in important storylines that resulted in them needing treatment. They weren’t just some random friend from dance class.

Stop trying to make Nelle happen.
The constant shoving of Nelle onto the screens didn’t help what was already another slow week. Obviously, they aren’t dropping Nelle’s past fiancé drama seeing that the sister of the guy called Carly to talk to her about Nelle. While Carly was busy ratting Nelle out to Joss, Sonny was trying to convince Michael not to trust her. Like Elsa sings, “Let it go!” I guess I’d rather watch Nelle than that awful Aunt Stella ranting about Jordan.

More: Amnesiac falls for hot doctor in Falling for Vermont

Kristina and Parker.
I honestly couldn’t focus on Kristina and Parker’s reconnecting, because everything else was distracting me. Was that the smallest college classroom ever? It looked like they were in a broom closet. Then there was Parker using some poster board as a teaching aide. This isn’t kindergarten, though based on those tiny chairs the students were sitting in, and the tiny classroom, maybe it was. Of course, the worst was Kristina’s blouse. What in blazes was that thing? It looked like it was choking her. Did she have to hide a hickey, or was she afraid of a vampire attack?