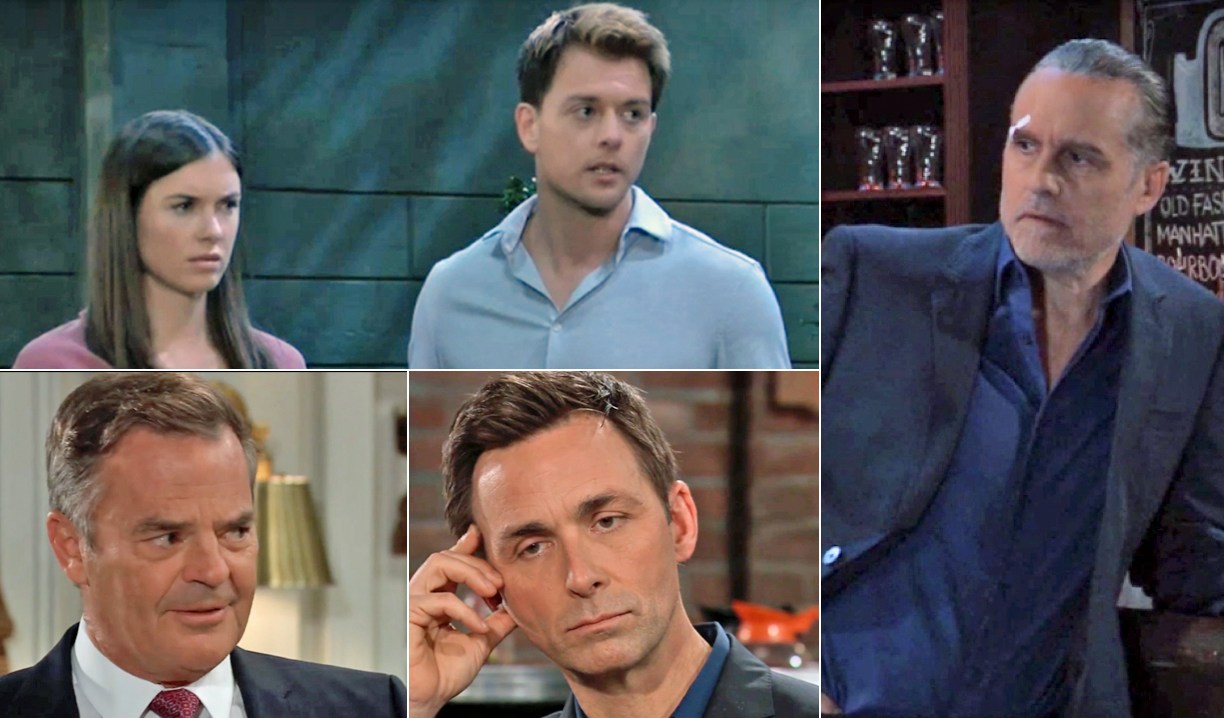 The infighting among the Quartermaines and Corinthos families is quickly escalating on General Hospital, but one has been a bit more interesting to watch. Spencer got closer to proving what Esme was up to, but like his father, needs an attitude adjustment. Esme’s downfall is long overdue. However, even if she goes down, she won’t be out, especially with some of the teases dropped about who her mother may be. And Liz’s story took a different turn.

Well, the Quartermaines are infighting over ELQ as usual, while Michael and Sonny are actively drawing lines and sides against one another. I’ve written before that I find the ELQ drama fairly boring, especially seeing this storyline of them against Valentin has been dragging on for well over a year now. And while Ned’s obsession with ELQ usually annoys me, even I felt bad for him being pushed out in the cold thanks to Michael and Drew’s merger idea. I would expect nothing less from Michael in tossing Ned to the curb to save ELQ, but never would I have thought Drew would be so cutthroat. Sorry, Ned, we know you were supposed to take over as CEO, but you’re not even getting that now! 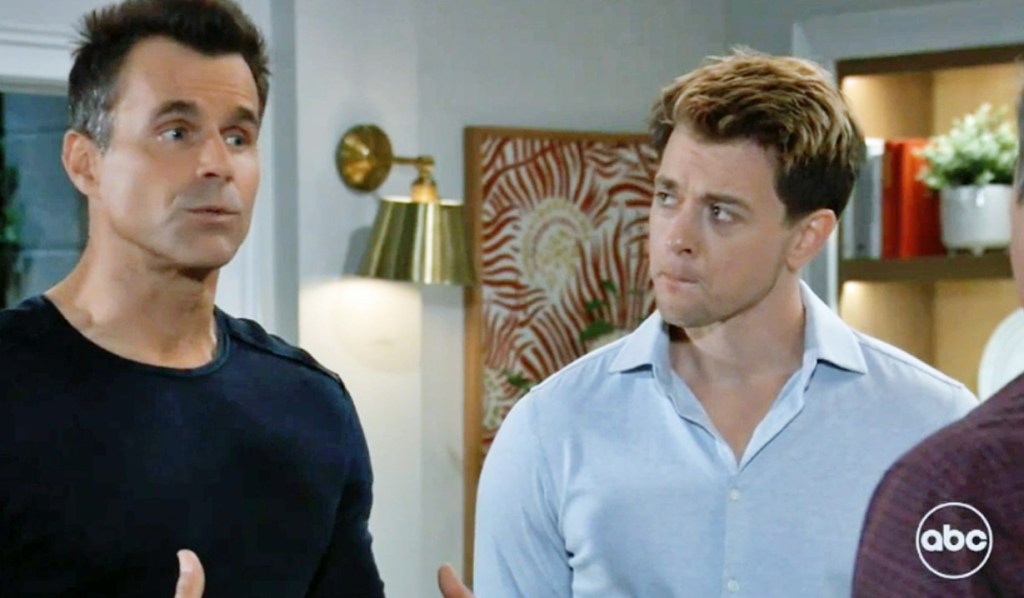 Come on Ned, we’re all Quartermaines, we can trust one another!

While on one hand Drew seemingly undermining Ned was a shock, I was also pleasantly surprised by Drew standing up to Carly. When Carly was caught red-handed with Nina’s wine glass and tried to claim Jason would support her even if he wasn’t on board with her plan, Drew told her that he won’t be that guy for her. Go, Drew! Finally, we are showing we have a bit of a spine. Where has this navy seal been hiding?

Still, he is keeping the secret like Carly for now, so I’m not ready to give him full praise. And when Drew directly asked if Carly will tell Willow and Nina the truth, she only said, “I’ll do the right thing.” That wasn’t an answer, that was Carly’s way of justifying that keeping the truth was the right thing to do. Her conversation with Joss on Friday, and Joss telling her mother she’s right to take any measure to protect Willow from Nina, has pretty much sealed the deal she’s not going to reveal the truth. But hey, maybe Carly will surprise me? 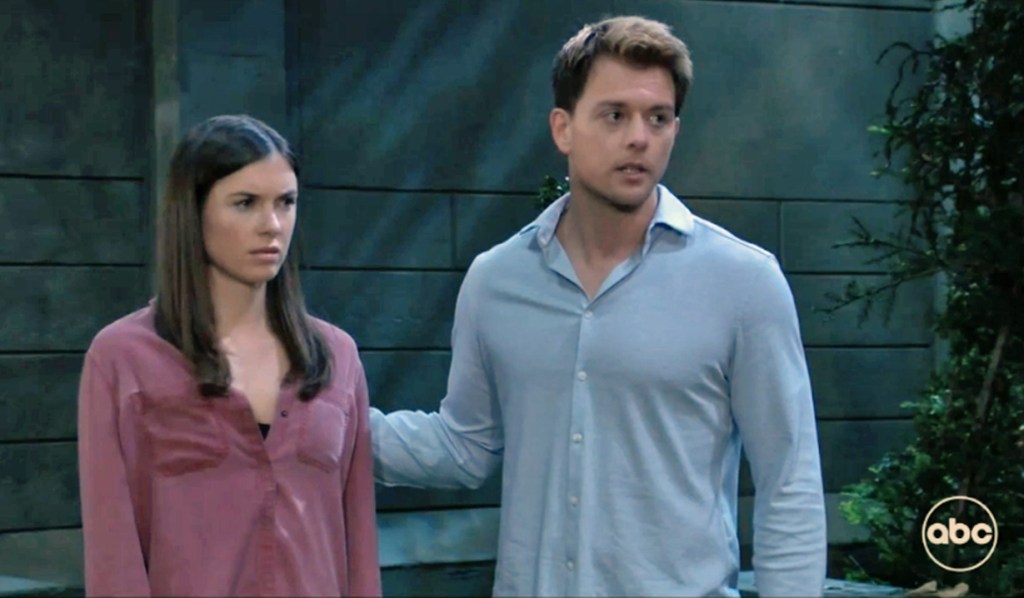 Given everyone in the Port Charles cemetery is buried near someone they hated or wrong, maybe it’s time to build another cemetery.

The confrontation between Michael, Willow, Nina, and Sonny in the cemetery got pretty heated, and I chuckled when Sonny told Michael that he would always have his back, but Nina has at least apologized for her mistakes. Michael is as hot-headed and stubborn as both his parents. Dante telling Michael that he was acting just like Sonny was on point. Michael went from insisting he was nothing like Sonny, to vowing to crush Sonny and take everything from him. Hmm, sounds familiar?

Sides in the family are being drawn, and the upcoming hearing is bound to get dirty and pit Sonny against Michael even further. Willow had a great observation this week when she feared Michael would turn on Drew when he quasi defended Nina. Drew was right in what he said though, even if we the audience know why he said what he did about Nina. Still, Drew made Michael stop and rethink all his venting that Nelle’s craziness was something she got from Nina rather than how she was raised, because if so, where does that leave Wiley? I was flabergasted that Michael saw Drew’s point. And it will really hit home when the truth about Willow comes out. 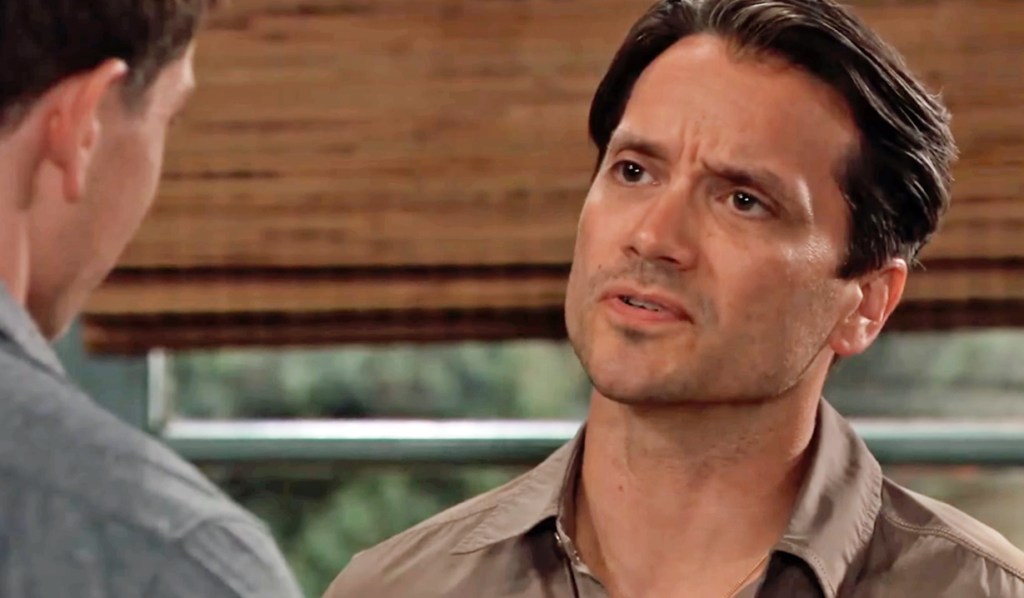 Dante telling Michael he was exactly like Sonny was the last thing Michael wanted to hear!

Michael showed how much he is his parents’ son when he asserted that if the day comes when Wiley asks about or to see Nina, he’d be armed with all the information he needs to know Nina’s a monster. It’s as if Michael doesn’t realize what he’s doing is in part similar to his parents’ feud with AJ, and in the end how it affected him. And yeah, just like Nina, AJ made huge mistakes, and at the time it seemed like what was done was for the greater good. But these characters never seem to realize that in end, someone is always going to be hurt. I reiterate what I said in last week’s column, I am most interested in Willow’s reaction above all others when the truth comes out. Will she’ll continue to side with Michael against Nina or not? Carly, Michael, and Willow love to complain that Nina keeps painting herself as a victim, but how will Willow deal with learning that Nina was another victim of Harmony’s?

Spencer Finds a Clue, While Nikolas Has Lost His Mind

Spencer locating Maggie’s letters about Esme’s father, and finding her mysterious bottles of pills has him inching closer to the truth about Esme. Once again just as he is on the cusp of redeeming himself, he goes and blows it with his attitude after turning to Britt for help.

Britt making Spencer say, “Pweaty Pwease, Bwitt,” to get her help to identify the pill was a cure blast from the past. But the fun situation stopped being one when the pill turned out to be an opioid, and Britt got serious. Spencer snapped and was downright ugly to Britt in a way I never thought he would or could be. He got in touch with his inner Cassadine genes in calling her out for never having a successful relationship or a conscience. This appears to just be more of his, “no one can learn I’m trying to help Trina so I need to piss them off,” strategy. A strategy that frankly stinks. Hopefully, when it all comes out, a few people will understand why he has been acting the way he has. Then again, it would be hard to blame them if they didn’t understand why he did what he did. 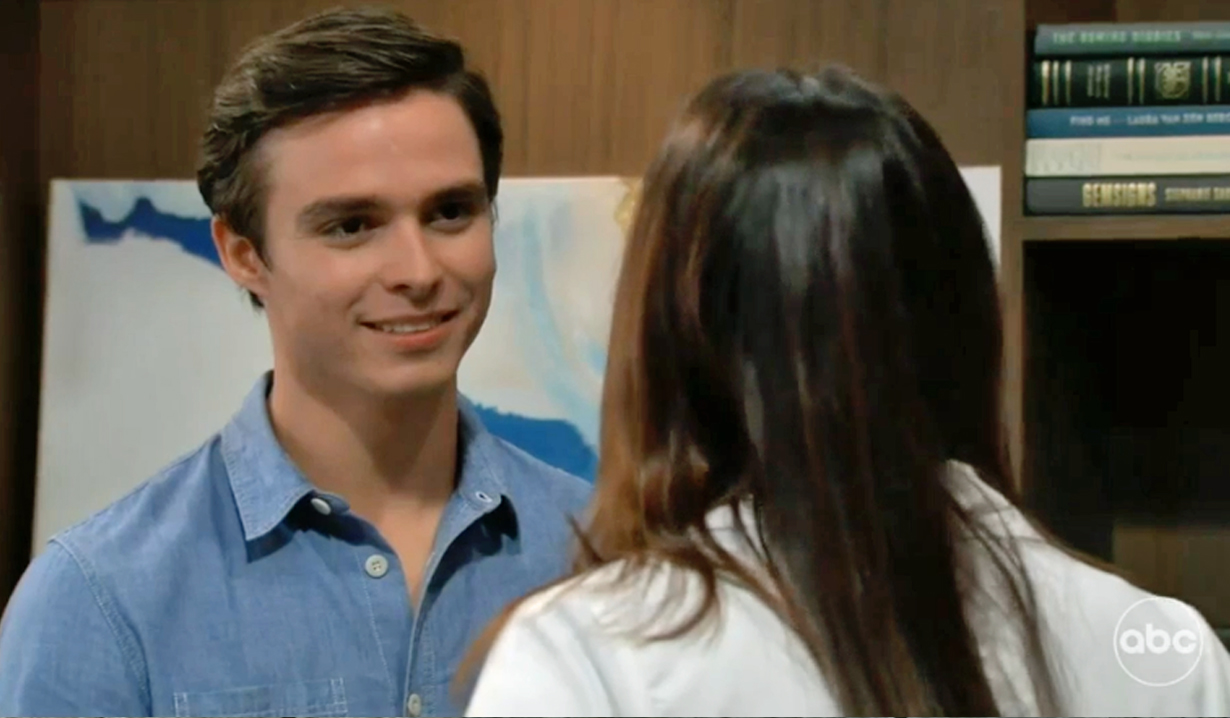 Spencer proves Britt has a heart by crushing it.

Then there is Nikolas, who I no longer have faith in after he point-blank told his mother he believes Esme is innocent. This of course is bad news, as, during her latest visit with Ryan, he ordered Esme to seduce Nikolas. I have been feeling this was coming for a long time now, but as so many commented, myself included, Nelle did this with Sonny not too long ago. So it’s just another rehashed soap plot. The only thing I can fathom that could be different this time is that Nikolas is so dumb he may sleep with and impregnate Esme. That would destroy Nikolas, Ava, and Spencer’s relationship completely.

Esme made an unscheduled visit with Ryan which opened up more than one can of worms, the biggest being the clues dropped about Esme’s mother. If you guessed they’d somehow mess with the time-space continuum so that Esme turns out to be Felicia’s child, you might have won yourself a trophy! While Ryan didn’t come out and say it, he did tell Esme she has her mother’s fire, and he couldn’t turn his back on her either. He then recalled Felicia fighting to stab him. At the same time, Felicia was having a bizarre conversation with Nina about having to fix a situation with her daughter or walk away. It felt like we were not so subtly being told she gave up a child she had with Ryan. 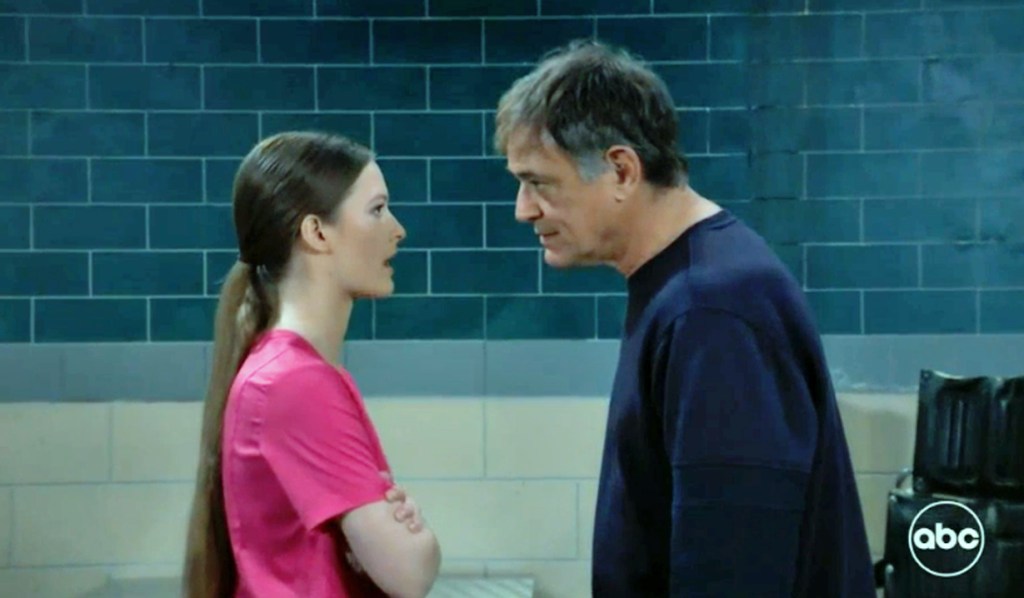 Esme threatening to throw her daddy under the bus was unexpected.

Either some Dr. Who time-traveling is going on here, or they are going to reveal Esme is much older than she is playing. Either way, I haven’t decided if it’s making my head hurt, or could open up a whole lot of storyline potential. And I wonder if Esme knows who her mother is? Because it seems like both Esme and Ryan are in town to get revenge on several people, not just Ava.

Chelsea, the psychic who once told Laura that Nikolas wasn’t dead, was back to channel Franco. Indeed she did channel Franco or seemed to, but Finn wasn’t buying it. I’m not sure I did either. Do I think Chelsea was conning Liz? No, but I’m no longer taking this story at face value. 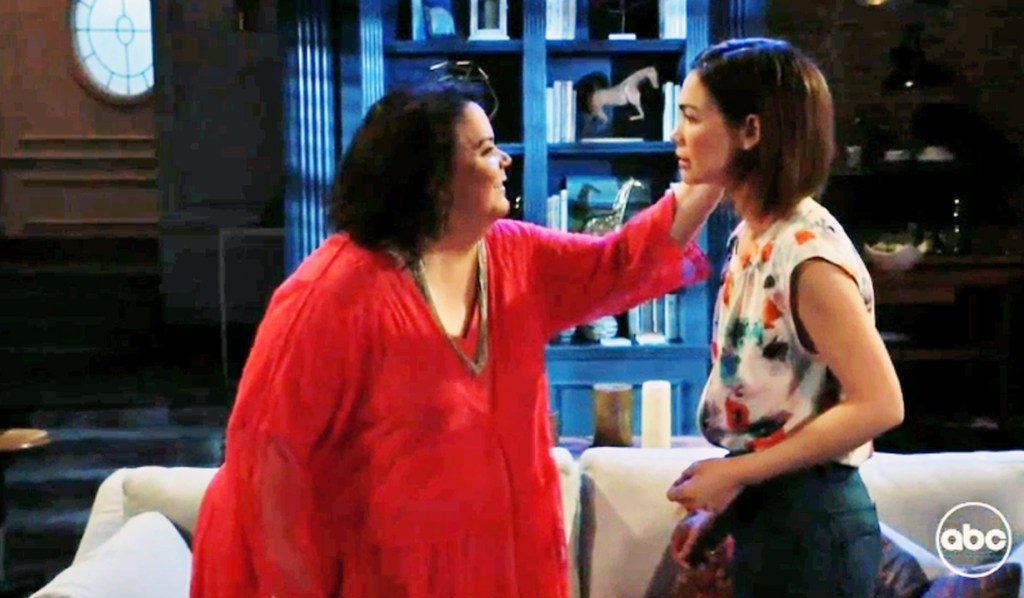 Are you there Franco? It’s me, Liz.

If you listened carefully, all Franco told Liz was to be strong, be alert and keep her eyes open. It was as if Franco was telling her that the answers are in front of her. Everything else was what Chelsea was sensing, including the angry force that didn’t like the new family that was forming in the home. As Liz keeps saying ad nauseam, Franco would never hurt them and would want them to be happy. So it can’t be Franco.

Then there was Chelsea’s hostile reaction towards Finn. She told him to come with an open mind next time, but she was angry with him for not being honest with Liz. At first, it felt as if she was accusing him of having a part to do in all of this. What if after all this time, it’s not Liz projecting this thing, but Finn? Could Finn be the one feeling guilty about moving on with Liz and Is subconsciously trying to sabotage it? Maybe I’m reaching at straws and trying to find something, anything, that avoids the “Yup, it’s been Liz all along” ending.

• I enjoyed Terry and Chet’s date, especially their open and honest talk about his being an amputee and her being a trans woman. Unfortunately by the end of it, Terry realized he was Amy’s brother, and Amy learned from another nosey nurse that Chet was on a date with Terry. And just like that, we never got back to the story. As much as Amy annoys me, I would have rather seen more of this storyline than watch Michael, Nina, and Sonny rehashing the same argument for the millionth time.

• TJ’s off on an adventure to find and bring Marshall back to Port Charles. News flash to TJ, nobody cares about Marshall, just let him stay gone!

• Martin and Laura’s sibling relationship simply makes me smile. When Martin told Laura that he was surprised he was not in the hospital because Lucy is a sexual panther, Laura’s, “Yuck, too much!” facial expression was hilarious and on point.

As always, these are just my opinions. Please join the conversation and post yours in the comments. 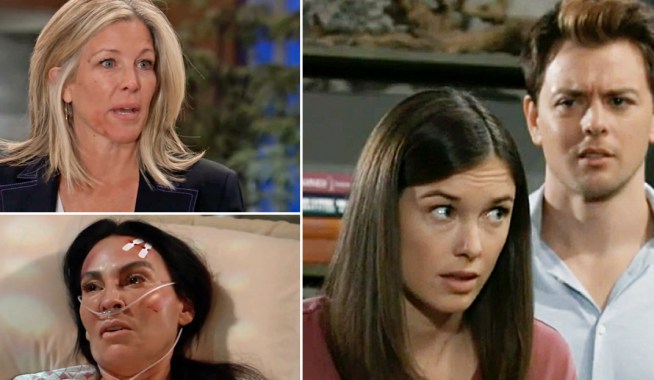 Carly Keeping Harmony's Secret on General Hospital Feels Like a Rehash of the Nelle Lie — Plus, Several Couples Put Smiles On Our Faces

Liz’s Storyline Turned Out to Be the Biggest Snooze of All, Pun Intended — and Can Chase and Brook Lynn Just Get Together Already? 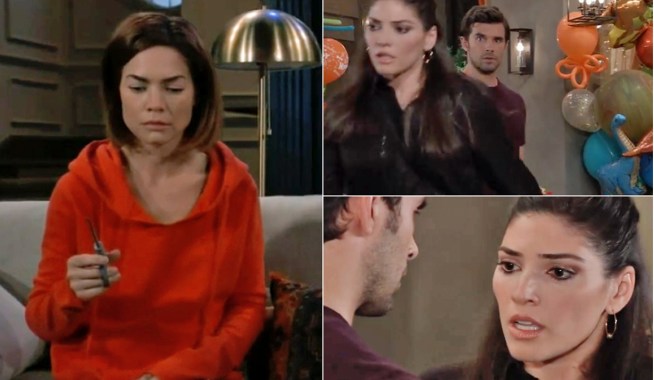