Deconstructing GH: Returns with a heavy dash of foreshadowing 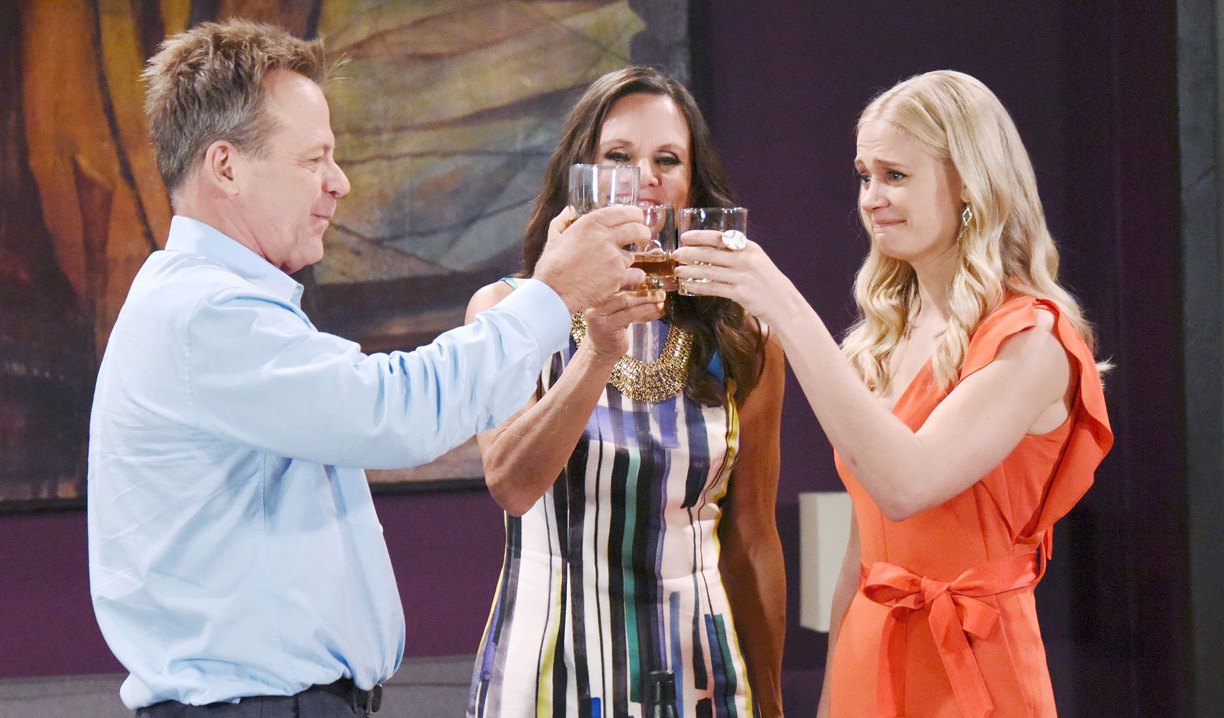 It was a week of returns, some expected, and some surprises. Over all the storylines were fun and quick and didn’t seem to drag. Even the Man Landers storyline, which I normally can’t stand, was somewhat tolerable. It still needs to come to an end though.

Ned and Olivia’s reception gets crashed.
It’s not a soap opera wedding without some drama. Fortunately Olivia and Ned made it through their wedding, and it was the reception where things got a little heated. Upset over Valentin, Nina headed to the Metro Court bar to grab a drink, not realizing it was Olivia and Ned’s reception. I thought it was nice of Olivia to invite Nina to stay and enjoy the festivities, and I am really proud of her for distancing herself from Charlotte so that she can settle in with Lulu and Dante. Unfortunately, the same can’t be said for Valentin, who returned a free man because the WSB didn’t want the embarrassment of a public trial that would reveal the Chimera mishap to the world. He made a B-line to try and win Nina back, along with demanding Charlotte back. Dante and Lulu look prepared to fight, but I wish they could simply agree on joint custody at this point. Again, I have to give props to Nina for standing her ground against Valentin, and pointing out he’s still hurt people like Spencer and he needs to make things as right as he can.

#GH Lulu has temporary custody of Charlotte. Valentin wants her back. Don't they have to go back to court? Valentin can't just TAKE her!

Hamlet, version 2.0.
Spencer embracing Lila’s kids’ performance of Hamlet as mirroring his own life and struggles was a little over the top, but then again Spencer is a dramatic little boy. His coming face to face with Valentin was a great scene. I couldn’t help but wonder what Valentin meant when he told Spencer he might have a way to balance the scales, and that he wanted them to be friends. Could Nikolas be coming back? Valentin once again reiterated this week that the events that led to Nikolas death are “open for interpretation.” Alive or dead, Spencer made his move and served Valentin with a civil lawsuit in the wrongful death of his father. It’s about time something come of Valentin not paying for what he did, and I loved that Alexis is on the case. Still, I could see this culminating with the return of Nikolas in order to have Spencer’s case tossed.

More: Michael Sutton brings Stone Cates back from the dead

Surprises for Ava.
Spencer’s visit with Ava to offer her encouragement was such a touching scene. Ava speaking about how much the little time she spent with Nikolas meant to her, and had he lived the different path her life may have taken once again just seemed like foreshadowing that the prince may be headed back. Avery’s visit to her mother, and her being frightened by her appearance, was completely heartbreaking though. I felt bad for both of them.

Felicia’s on the case.
Bobbie and Carly brought Felicia back to investigate more into Nelle’s past with the hope that whatever she finds will cause Michael to dump Nelle. It’s always great to see Felicia, but I wish it could be as the mayor of Port Charles. Yeah, I haven’t forgotten that she is the rightful mayor, even if the writers dropped that storyline and want it forgotten.

Oh Carly!
Carly sent my head spinning with her meddling. She went from plotting with Bobbie to break up Nelle and Michael, which I can understand, to vowing to interfere and stop Joss from making a mistake with Oscar. Carly is like that one friend who constantly claims she is low maintenance and hates drama, but is actually the one always stirring the pot.

The return of evil Obrecht.
It seems Mutter had been good for far too long, and now her obsession with Finn could get dark. She’s vowed to take what is most precious from him, which would be Hayden and the baby. We know that Rebecca Budig is exiting General Hospital soon. I hate to think Hayden will miscarry the baby, but it really looks like that is the only way to write her out. Without a baby she has no ties to Finn and may need time away from Port Charles to overcome the loss. I could even see her going to Europe to hang with Tracy for awhile. It’s a shame that they are writing her out, because the scenes between Liz and Hayden this week were so good, especially when Hayden jokingly told her, “I think I liked it better when I hated you.”

Me, too! I've been a huge fan of both Rebeccas for many years!?? #GH

It took so long for them to get to be friends! Not fair that it's over!!! #GH

Sam vs. Sonny.
In last week’s Deconstructing GH I discussed that I wished Sam had stabbed Sonny, a scene that turned out to be one of her many delusions. Well now she’s gone and bought a gun, and my hope is they actually go through and have Sam try and harm Sonny. I am getting a little tired of seeing Sonny taunt her, but rather than take out Sonny, I have a feeling Sam will accidently shoot someone innocent. Heck, she might shoot Jason at this point!

A tribute to Lee Baldwin.
Serena’s return in the wake of the death of Lee Baldwin (played by Peter Hansen) was a nice surprise and a great way to honor a legacy character and actor. It was nice to see Scott involved in a serious storyline, as opposed to the slapstick they’ve stuck him with lately. My one complaint was we could have used more than the one flashback of Lee/Peter.

These are only my opinions. Please leave your own thoughts in the comments.

Deconstructing GH: A kidnapping and...