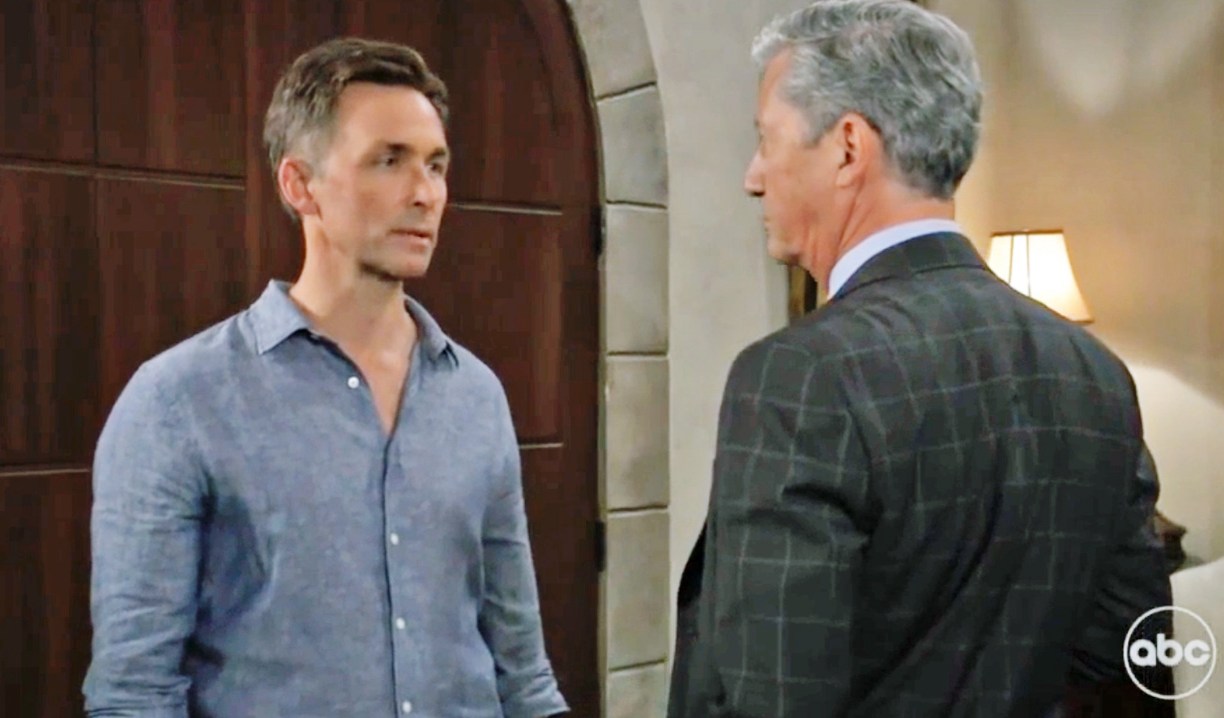 Anna and Valentin followed a trail of clues of Peter's whereabouts to Greece. After a local bartender drugged Valentin's drink, he woke in Victor's compound to learn Drew and Obrecht were also there, and Victor was working with Peter. However, Victor knew Peter would double-cross him and wanted Valentin's help taking him out. Valentin was in for a second shock when Victor claimed he was Valentin's father, and therefore a Cassadine after all. Credit: ABC screenshot

This week on General Hospital, viewers got a small, but welcomed break from the Sonny and Carly drama, with more of a focus on what’s been going on in Crete. Ava’s stalker was revealed to her and a Cassadine family secret came out, which involved yet another rewrite that will need explaining.

Everyone Hates Peter, Even His Accomplice

Valentin found himself briefly imprisoned with none other than Drew, and they both brought each other up to speed on Peter and Victor working together. However, he was quickly whisked off to better accommodations in Victor’s compound, where Victor begged Valentin to team up with him to stop Peter before he killed them both. As much as I adore Charles Shaughnessy, I’m still finding it difficult to accept him as this evil supervillain. I also can’t wrap my head around him actually fearing Peter. It should really be the other way around and Peter fearing his punishment for failing to deliver the goods to Victor.

As Victor and Valentin were discussing the fact that Peter would likely betray Victor, Peter did just that, and reactivated Drew as a conditioned super-soldier. I wrote last week that I hoped we wouldn’t have to go through a brainwashed Drew storyline, yet here we are. While I wish the writers could have come up with something better, even I have to admit Drew’s only use to them would be as a soldier. Peter used Drew to try to take out Anna and Robert, but his plan failed. Guess he’s not that good of a soldier after all! 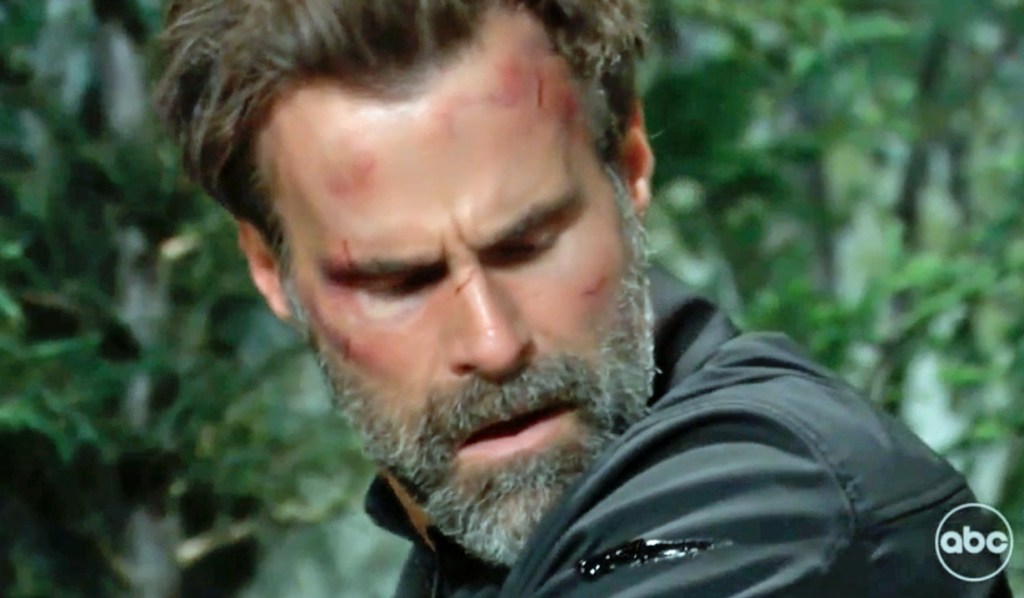 Victor meanwhile dropped a pretty big bomb on Valentin, that he wasn’t the son of some unknown groundskeeper that Helena had a fling with, but he was Valentin’s father, making him a Cassadine through and through. So are we just supposed to forget that blood tests with Alexis that confirmed Valentin had no Cassadine blood? Or are they going to pull out the old soap trope to explain someone had the results switched? Perhaps though it will never be addressed again and the writers just expect us to forget about that bit and go with this rewrite.

Over in Monte Carlo, Dante and Sam continued to connect as they tracked down Shiloh’s old acquaintance Dallas, and Sam news from Anna that Drew indeed is alive. Dante and Sam also admitted they had feelings for one another and when this case is over, they’d like to see where things between them could go. I’m having a hard time feeling these two as a couple, and their discussion of what happens when Drew comes home really irked me. While yes Sam, like everyone, believed Drew was Jason at the time, she acted like there was never any real love between them as the man she fell in love with didn’t exist. I also call bull when she claimed that bringing Drew home was all for Scout and had nothing to do with her. This show seems to be asking the viewers to just go along with a lot we know isn’t what we watched. 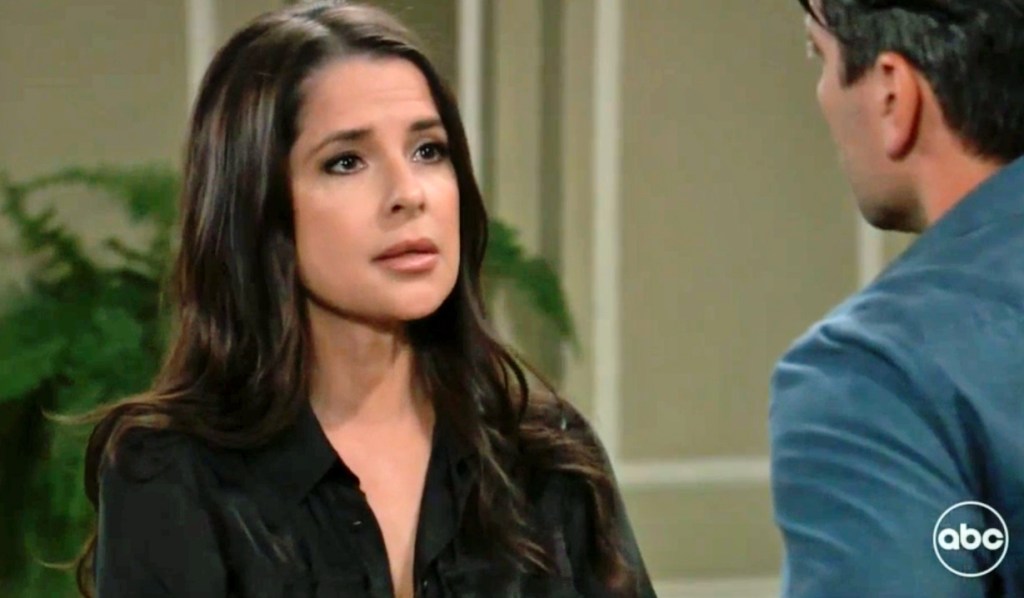 The whole conversation came across to me as a sloppy way of forcing Sam and Dante together even more than the show already has. If it’s supposed to make me believe they can be a couple without complications, it didn’t work. Then there was Dante telling Sam that he had accepted it was over between him and Lulu long before the accident she was in, while at the same time Maxie was telling Austin that Lulu wasn’t going to marry Dustin because she was still in love with Dante. Maxie made note that was a secret she had never told, and that Dante and Lulu were a love for the ages that couldn’t be destroyed. The sudden discussion of Lulu and that secret at least gives me hope the character could be brought back sooner rather than later. Aside from what I feel is a lack of romantic chemistry between the two, deep down I think Sam and Dante will also likely be broken up by their pasts before they even get started as a real couple. So why get invested?

After Spencer’s confession, and confrontation with Ava, Nikolas threw his son out of the house and cut him off financially. I had previously written I hoped this would come to pass as it was a fitting punishment for the spoiled brat. However, just like his friends, I couldn’t believe I found myself feeling just a bit sorry for him. Even Ava of all people, who I thought would rage at him more than she did, felt Nikolas might be making another mistake in punishing his son for doing what he learned from him, how to act like a Cassadine. I actually hope Nikolas and Spencer can work things out, and that even Spencer will ask Ava for forgiveness. Esme on the other hand is an evil cray-cray witch, and I am waiting for the day that Joss and Trina expose her secrets.

Nina had a number of uncomfortable confrontations this week, none of which was the one we are all waiting for. That would be one with Carly when she drops the Mike was in love with her truth-bomb on her. First up was facing off with Michael and Willow, with Curtis being Nina’s latest defender and pointing out cutting her out of Wiley’s life only punishes the boy. She later had it out with Joss, who ripped her to shreds while also tearing the journal Nina gave her to pieces in front of her. 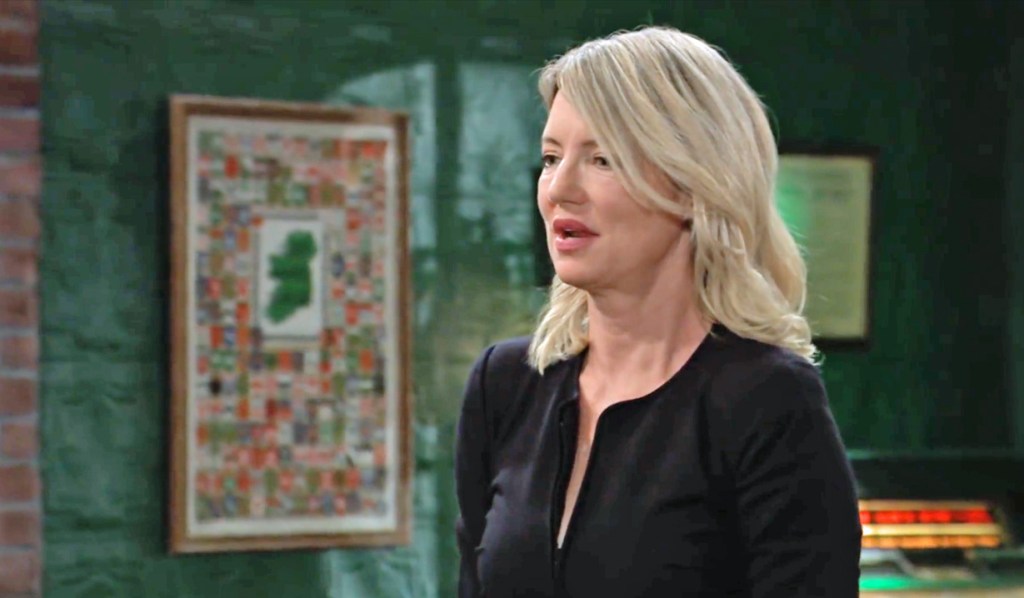 Many characters have noted how Nina is going to have to face the consequences and the anger of all the people she has hurt, but so far she hasn’t really. She’s not in jail, she hasn’t been fired from Crimson, and it’s clear she still has her fair share of friends and defenders. Is this going to end up being one of those, “The guilt you feel for doing what you know was wrong is punishment enough” scenarios?

Carly finally confronted Sonny about Nina’s motives, but of course, she only thinks Nina lied about Sonny out of an act of revenge against Carly for what she did to her and Nelle. Sonny continued to maintain he doesn’t want to waste his anger on a pathetic woman such as Nina, and dragged Carly up to bed. I thought the show missed a great opportunity to show Carly and Sonny’s physical reunion be hampered by each of them not being able to put Nina and Jason out of their minds. 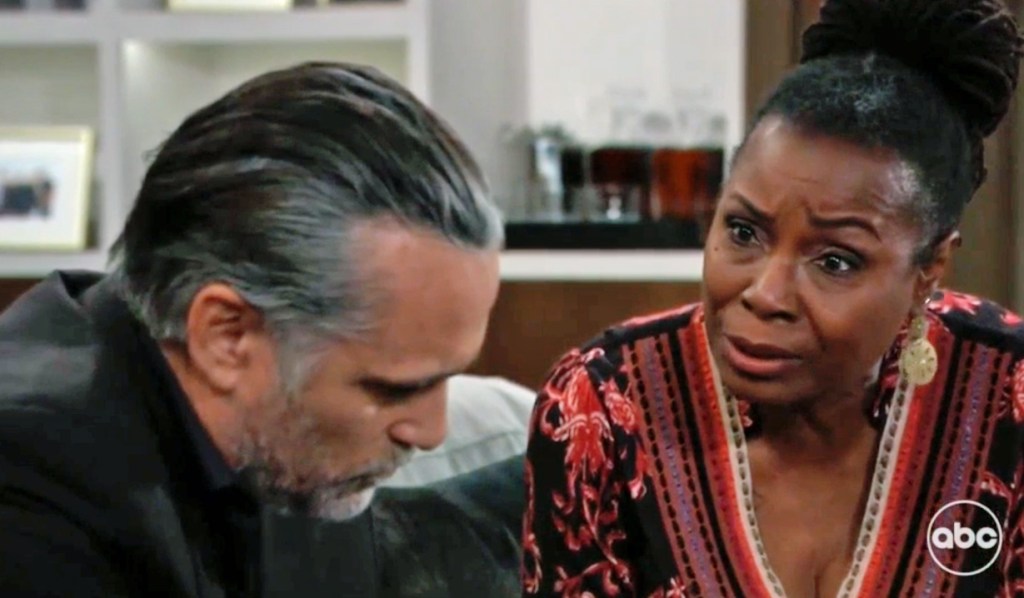 As Carly continues to remain in the dark about Sonny and Nina, Sonny still has no inclination of what really happened between Jason and Carly. As frustrating as this might be for us viewers, my guess is this won’t fully play out until November Sweeps, and likely will drag on to be part of a big New Year’s Eve showstopper that the show pulls out every year. Then again, Phyllis’ arrival in Port Charles likely will push Sonny to face his unresolved feelings for Nina sooner. Plenty of other viewers have also been disappointed in the way things are going for the couples they ship, hoping something happens to shake up this boring return to normal.

I’m still hoping Donna calls Jason ‘Daddy’ in front of Sonny. If she can run into his arms first, all the better. #jarly

As usual, these are just my opinions. Please join the conversation below in the comments and let me know your thoughts! And don’t miss our photo gallery of the best male rivalries on the soaps. 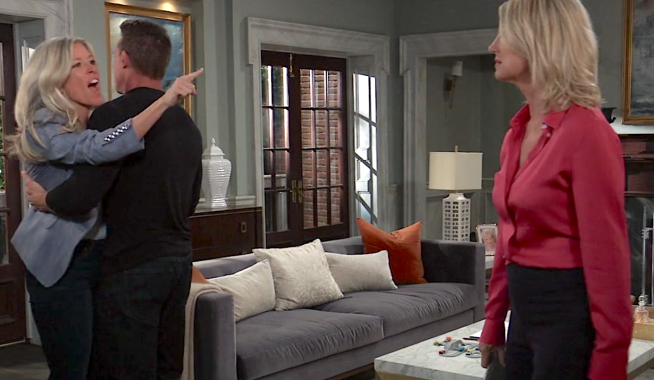 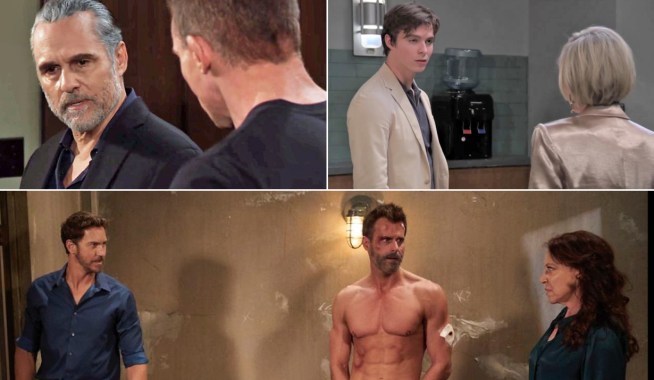