Alexis Encountering Ryan on General Hospital Was a Great Friday Cliffhanger — Plus, Popsicle Peter Might Soon Be Thawed Out 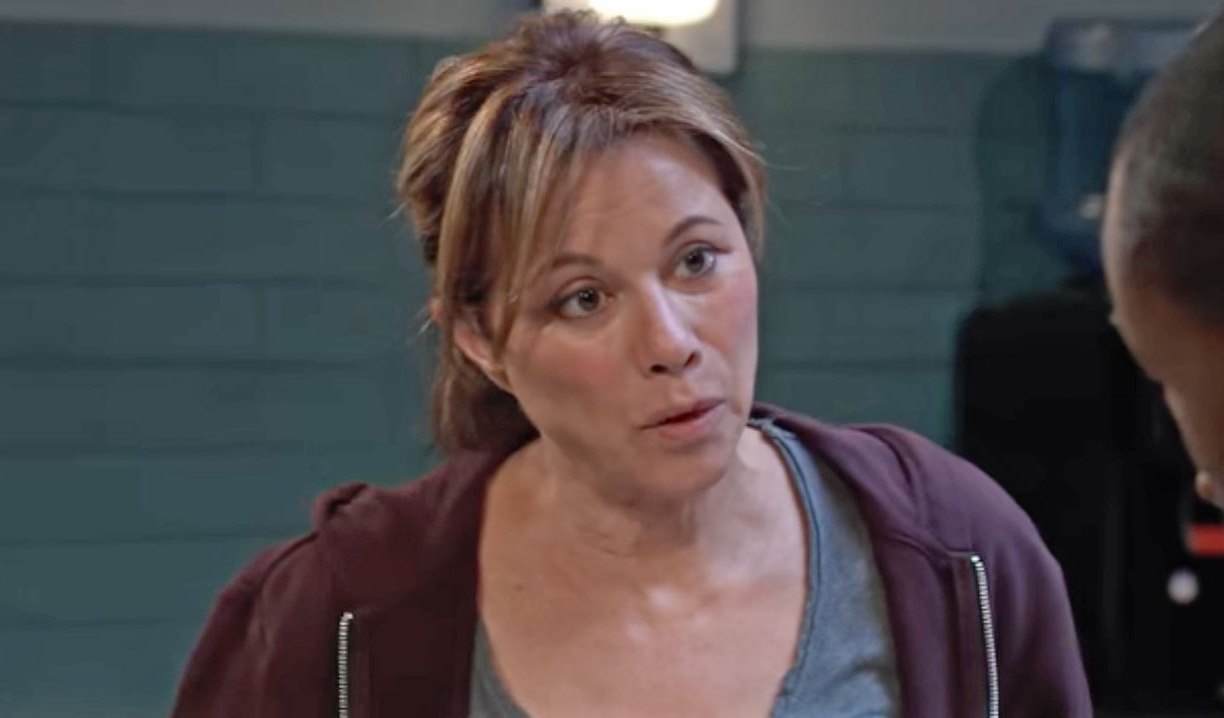 Compared to last week’s episodes, this week was like night and day on General Hospital. Last week so much was going on, including the introduction of the new Metro Court pool set that I loved. This week, it’s like everyone took a vacation at the pool, and frankly, several of the shows and storylines were a bit dull. There were a few high points though, so let’s get to discussing what happened.

Lenny’s heart turned out to be the least of his worries when the specialist in New York discovered he had pancreatic cancer. In last week’s column, I pondered that Sonny had the means to help Lenny if only he could remember who he was, but commenters pointed out that I overlooked Nina was wealthy too and could help pay for Lenny’s treatments. Indeed Sonny, aka “Mike” called Nina to inform her of the news and asked her to return to Nixon Falls. 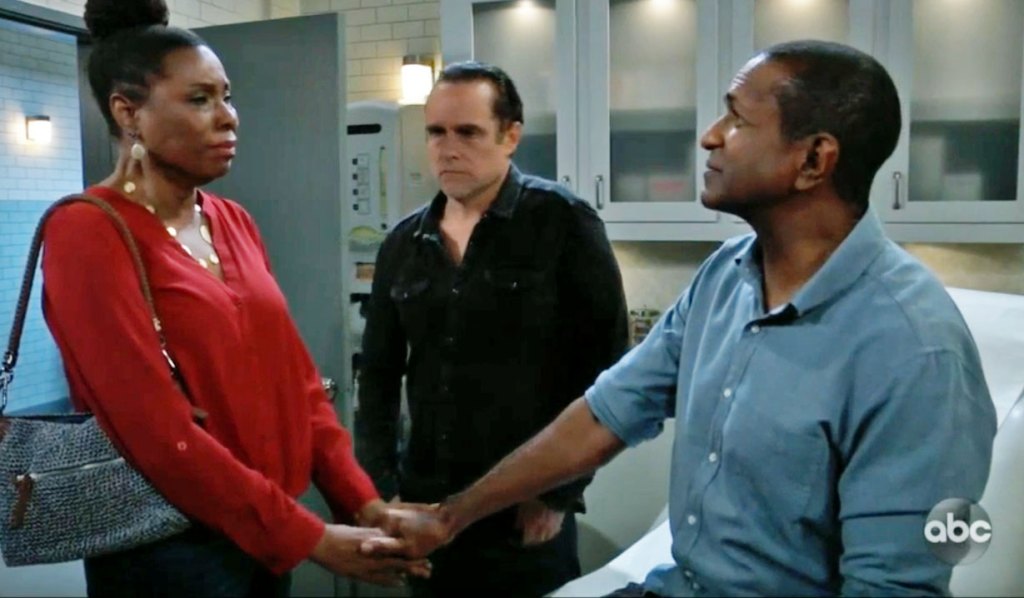 More: Maurice Benard opens up about Mike and Nina’s story

Nina and Lenny’s private talk about her offering to use her connections to help with his treatments was heartbreaking. When Lenny made her promise that if it looks like it’s getting to the end that she would help Phyllis let go, it tugged at my heart. Still, as much as I’ve come to like Lenny and Phyllis, the end of “Mike” can’t come soon enough. This has gone on far too long. Could Lenny’s death trigger more of “Mike’s” memories of his dad? Also, can we talk about “Mike’s” hair? I’m sad that “Mike” is back to the black dye because he looked so good with the silver. Then again, it depends on the scene!

🤣🤣One scene it’s grey and the next it’s black!

Spencer finally reunited with Cam and Joss and even pulled out the “townie” insult when speaking to Cam. It will be interesting to see how they connect onscreen because they, along with Emma, were all so heavily intertwined back in the day, and it’s hard not to make comparisons to the younger actors. They better not dare recast Emma if they bring her back! One thing is for sure, the casting director did a great job finding someone to play Spencer who looks so much like Nikolas. 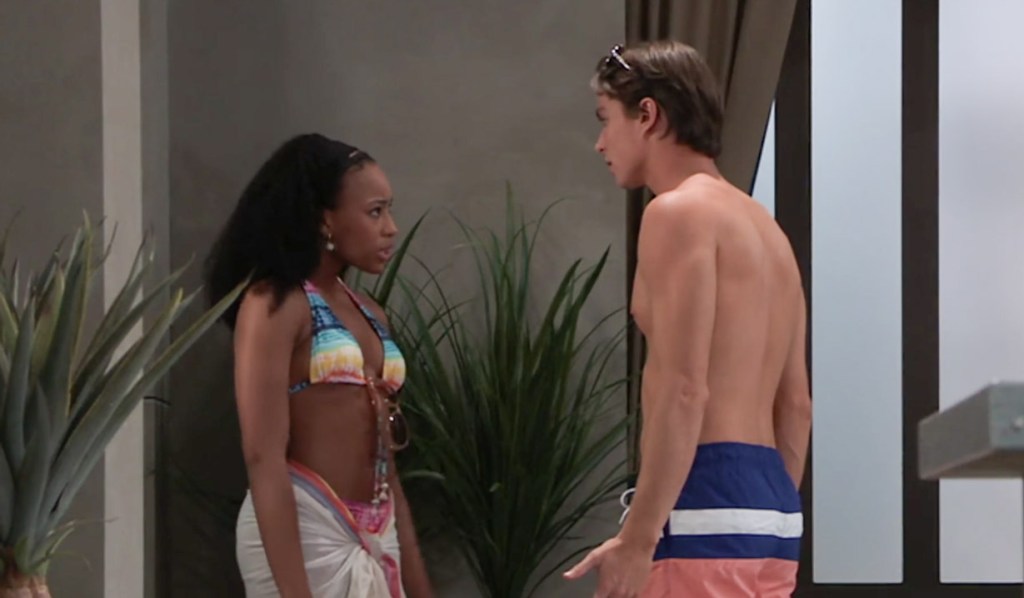 Trina’s willingness to keep Spencer’s secret, that he’d been in town longer than his family and friends knew, didn’t sit well with me. Trina has always come across as the most open and forthcoming of the young adults. Then again Spencer’s explanation about how his father faking his death hurt him resonated with her.

More: Actresses chime in on the Pine Valley reboot

I did enjoy the reference to The Parent Trap in regards to Trina sending Nikolas and Ava drinks to one another at the pool. I can’t believe ABC didn’t use it to plug Disney+ while they were at it. However, I’m really getting tired of the stalker nonsense and hope it is resolved soon. Spencer directing all this anger at Ava seems misplaced in my opinion. Her refusing to testify against Valentin was minor compared to Nikolas letting everyone believe he was dead. When Spencer brought up the cockroach gift to his father, and lamely covered it with the excuse that he saw it in a now-deleted social media message, gave me hope that Nikolas was on to the fact that his own son could be the stalker.

The highlight of the week was the news that Alexis and Shawn received. Shawn learned that the governor, under re-election pressure, used the Judge Carson case for some good press and released Shawn with time already served. Alexis meanwhile was being transferred to a white-collar prison that Shawn joked was a day spa with guards.

Though she’s been moved out of Pentonville, Alexis’ sentence was found to be fair, so she has to serve it out. I can’t see the writers leaving Alexis in prison for another two and a half years. My guess is that the governor and attorney general, who are looking into the other wrongful sentences, will pardon Alexis for her role in exposing Carson’s corruption. Then again, Friday’s big cliffhanger could also be a turning point for her. She discovered that Ryan Chamberlain of all people is at her prison spa as well. I never saw that coming, so it was a really great surprise. This could become integral in proving Spencer as the stalker because if you recall, months ago Ryan received a returned letter from Spencer as the stalking had begun. 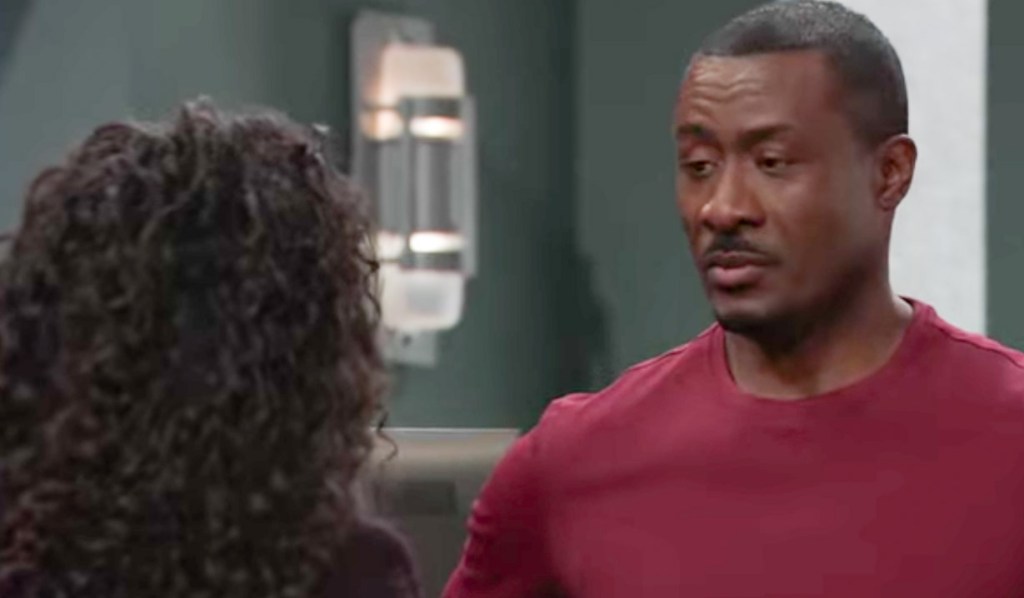 Shawn meanwhile is determined to find out who really shot Hayden. They sure are mentioning her a lot lately. I am hopeful that means we will see her return at some point. Now he’s teamed up with Sam of all people to solve the mystery. He probably would have faired better if he asked Curtis to come out of retirement and help him. At least this gives Sam something to do that could turn into a fun adventure.

Closing In On the Truth About Peter

In New York, Anna and Valentin got new information from the helicopter pilot who failed to pick up Peter and learned someone else was on the roof with him. His description of the person got Anna to thinking, and she deduced it was Finn. Honestly, I was expecting it to take another week for Anna to put two and two together that Finn was involved in Peter’s disappearance. 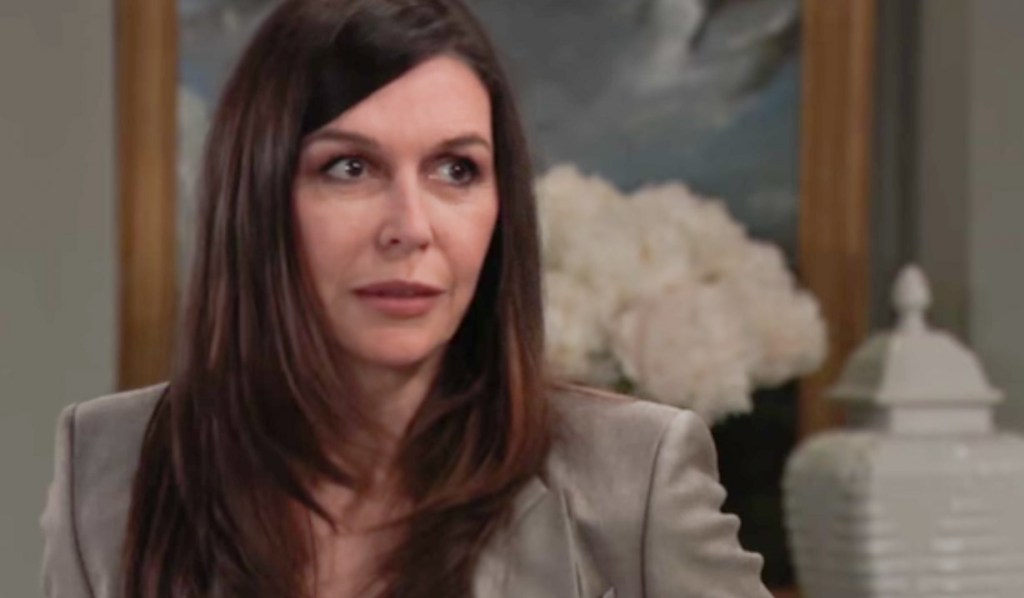 More: Three twists that could shake up General Hospital

Meanwhile, Liz suggested to Finn that they turn to Jason to help get rid of Peter’s body, given he makes people disappear for a living. This has been the smartest idea either one of them has had so far, though there was something fitting about Finn’s idea of dumping Peter in a landfill. The end of this Peter problem can’t come soon enough, because if I have to listen to Finn and Liz rehash what happened and their predicament one more time I will throw myself down a flight of steps and into a freezer!

Sasha and Brando, who I feel I’m in the minority in liking, took up a lot of screen time. I mean a lot for two minor characters. Though they seem to be back on track, Gladys is still lurking and seems determined to push Sasha out of Brando’s life so he can live the high life as a mobster. My previous comment that Gladys actually looks really good as a blonde is likely the only nice thing I’ll ever say about her. She just needs to get drunk at the pool and fall off the roof of the Metro Court at this point. If she lives, she can sue Carly and go away a millionaire. 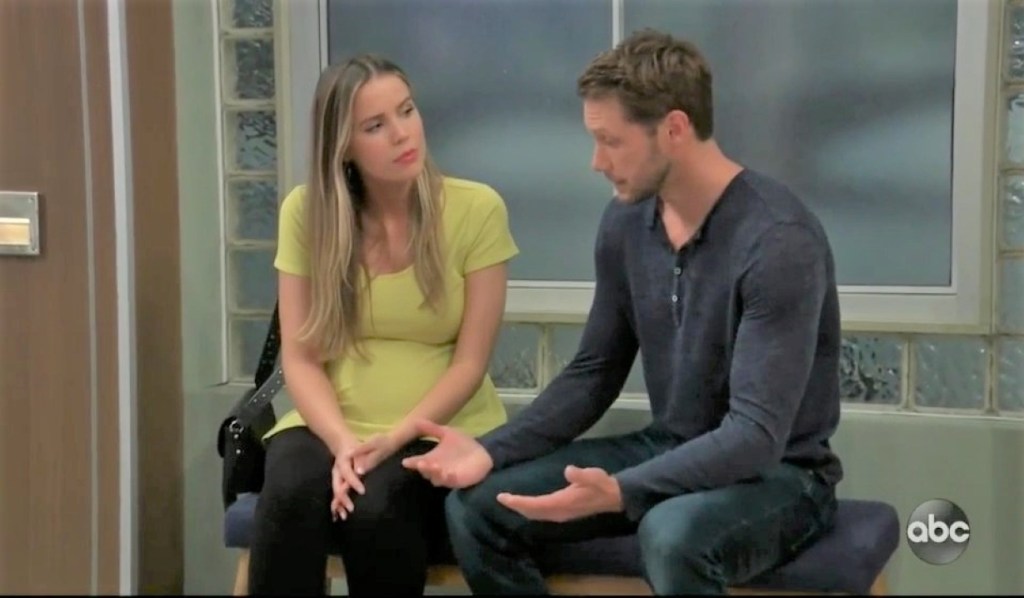 Dante and Sam trying to deny they have feelings for one another served up the line of the week, if not the year. When Sam felt she was being slighted by Dante, she commented about how uninteresting she must be to him and that Sam rhymed with Spam. I will never be able to look at Sam the same way again.

The writers need to go back to the drawing board when it comes to uncomfortable, awkward couple banter. If they were trying for cutesty that was a major fail. These are two characters who lost the loves of their lives, treat them like adults. #GH

I was really glad that Monica finally took Jason aside to tell him that while she is happy for him if he’s truly happy to be marrying Carly, she can’t forget or forgive what Carly did to AJ. I have been waiting for this talk and was hoping they wouldn’t sweep that under the rug.

These are simply my thoughts on this week’s episodes of General Hospital. Join the conversation by leaving your own in the comments below.

Get your free daily soap-opera fix for General Hospital — and all of the other daytime dramas — delivered straight to your email inbox by signing up for Soaps.com’s newsletter. And don’t miss our gallery of products that keep soap stars looking young. 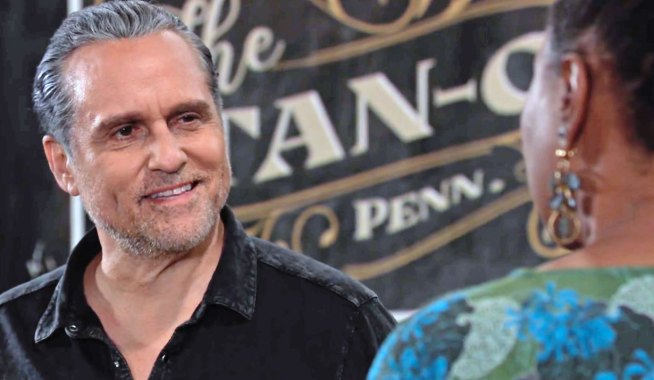 General Hospital Teases Viewers With Hints That Sonny May Soon Return — Plus, Austin's Connection to the Quartermaines Raises Questions

General Hospital Has Everyone Wondering What Happened to Peter's Body — and Many Praying He's Still Dead! 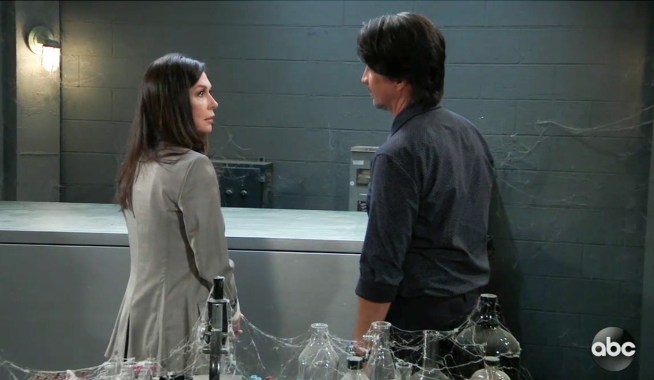