It’s Been a Long Time Coming, But the General Hospital Double Wedding Payoff Was Worth the Wait 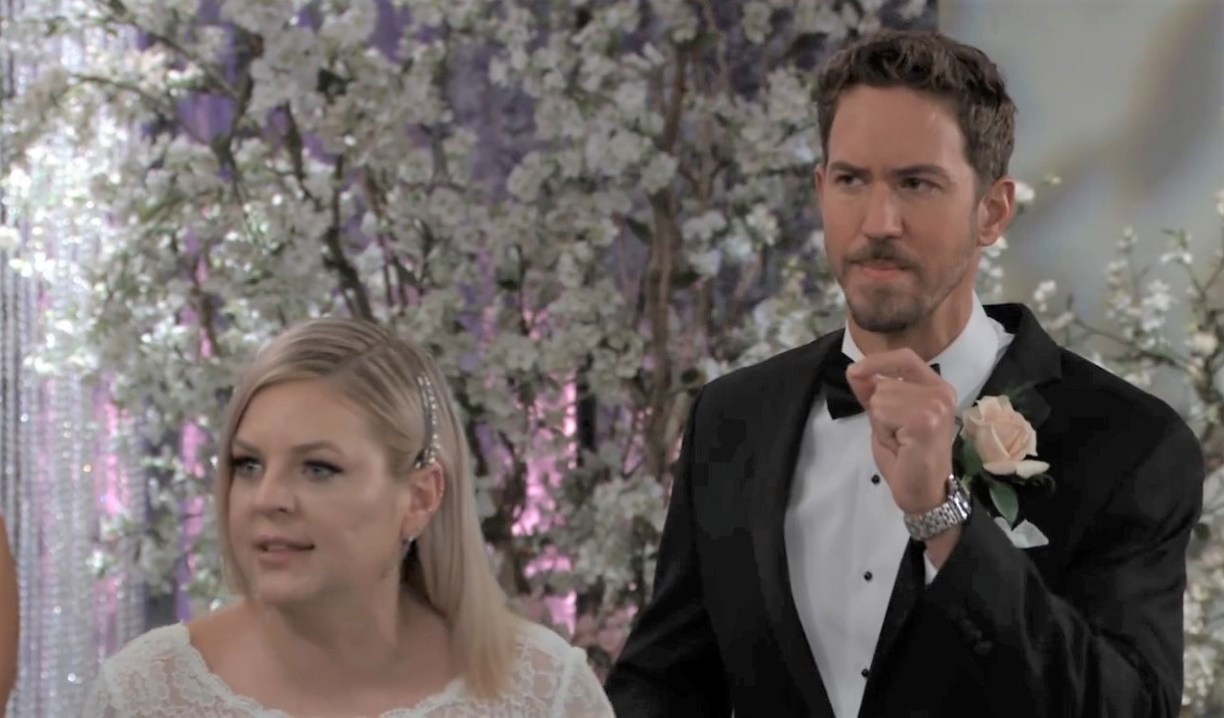 The week that seemed like it never was going to arrive finally did on General Hospital, and the betrayal, truth bombs and shocks made for one of the best weeks on the ABC soap opera in a long time.

Valentin and Anna tried their best to stop the wedding by kidnapping Peter, but unfortunately, Dante found him bound in a closet where Valentin’s men left him temporarily. Just when it looked like the wedding was going to happen, the notorious Nurses Ball crasher Obrecht appeared and blew it all to hell. I had wished in last week’s soapbox that Obrecht would bring Peter down, and she didn’t let viewers down! She played Alex’s message for all to see. Of course, then the expected happen, Maxie didn’t care and still wanted to marry him. The eye-roll from Robert upon watching Maxie propose to Peter was hilarious. Robert has gone from being the grumpy grandpa who was downright annoying to having some of the best comedic scenes and lines.

Fortunately, there was no wedding because Valentin was forced to pull out the big guns and expose everything Peter had done, including being in on Drew’s kidnapping and his plane going down. James Patrick Stuart was excellent at displaying the look of hurt and grief on his face while doing what had to be done. Oh and suddenly Sam remembers who Drew was and had to be held back by Dante to stop her from strangling Peter. Obrecht should have clicked that pen so he released Sam and let her do her thing!

The wedding stuff was firing on all cylinders today. I’m SO HAPPY Maxie finally knows the truth and Uncle Mac punching Peter was just what the audience needed 🙌 #GH pic.twitter.com/fOuTpXSirM

Anna was forced to back Valentin’s story up because obviously Maxie and others weren’t going to take the Cassadine’s word for it. It was glorious to finally see her facing the truth and dropping some harsh words where Peter was concerned, such as she didn’t think Peter was even capable of knowing how to tell the truth and was never a good person. It’s just refreshing that it appears we are finally getting the real Anna back and out from under Peter’s spell.

As bad as I feel for Maxie, I feel worse Finn, who is collateral damage in all of this. Everyone under the sun tried to warn Maxie about Peter, but she wouldn’t listen to them. However, Finn put his initial doubts about Peter aside because he trusted Anna, who as he learned, had been having doubts for months now.

So will Finn and Anna survive this? There are a number of fans hoping these events may open a path for a relationship between Valentin and Anna. I’ve long felt there is more chemistry between them than between Finn and Anna. It’s no secret that I would much rather see Hayden return for Finn. However, with Nina free of Jax, I just can’t see Valentin not trying to get back with her.

That Other DNA Reveal

I am wondering how learning of Anna’s decision to keep the truth about Peter a secret will influence Finn’s decision about the DNA test he ran on himself and Chase. Last week I worried Jackie might change the results to protect her family, but a reader suggested another possibility involving everyone’s other favorite-to-hate-baddie Cyrus…

However, Friday gave us another juicy possibility. Finn went to get Violet from Jackie’s room, not knowing Chase had already taken her. They talked, and as he was leaving, Gregory overheard Jackie telling Finn how she has been reminded lately why she found him so attractive all those years ago. Oh brother… err, daddy? The previews have Gregory demanding to know where Jackie disappeared to the day before their wedding. I really want to know if Finn is or isn’t Chase’s father, but given all that went down this week, I can’t imagine that coming out so soon. The show has to save something.

Where Does Maxie Go From Here?

After making sure Maxie, who appeared to go into false labor, was safe along with the baby, Britt spilled the tea she knew about Peter to Maxie. The look on Britt’s face might have mirrored all of our faces when Maxie insisted that Peter wouldn’t hurt her. If Maxie seriously still believes in Peter after all of this then maybe Obrecht needs to clicker train her to hate Peter. Someone needs to save Maxie from Maxie!

Andy’s final recorded message to Franco helped him have a Drew memory breakthrough, and he remembered Peter kidnapping Drew to deliver him to Helena. Fuming, Franco went in search of Jason and Peter, but found Peter first and clobbered him over the head with a crowbar. The previews show Franco holding Peter hostage somewhere, and this couldn’t be a more delicious turn of events. Franco, like Peter, is a very divisive character among fans. You either hate him or see the good in him. So for Franco to be the one to potentially deal with Peter is a twisted twist for sure. Now if he calls in his nemesis Jason for back-up, that would be the cherry on top of this twisted sundae.

The only other major storyline playing out this week was Nina predictably screwing things up by telling Wiley that she was his grandmother and Nelle was his mommy, causing Wiley to tell a devastated Willow that she wasn’t his real mommy. I felt just like Ava did when that happened because she made me say, “Carly was right!”

These are simply my opinions. Join the discussion and share yours in the comments below!

It Was a Great Week of General...