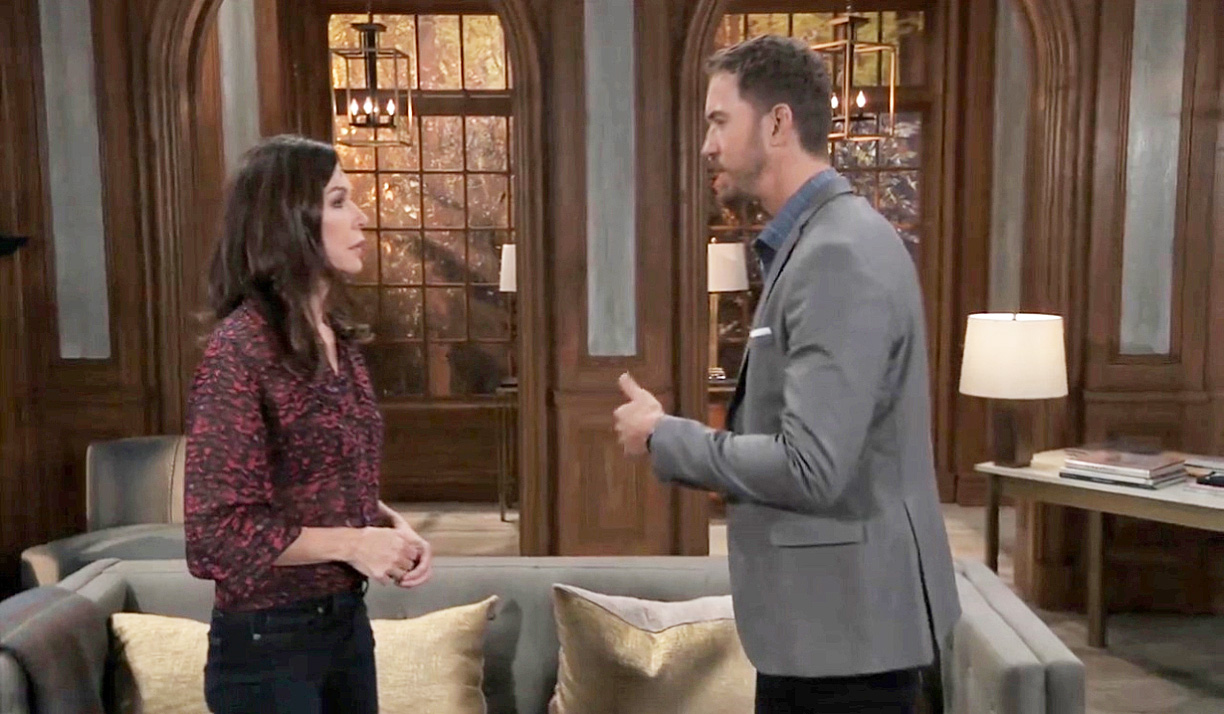 This week on General Hospital felt a little like a mixed bag. The reveal that Nelle was Nina’s daughter, and Peter’s world quickly crumbling, were high points. Alexis finally seeking out help was fantastic as well, but she’s still got a world of trouble headed her way for stabbing Dante. Scott was hilarious as always, especially talking about Jason’s old closet of cardigan sweaters. Then there was watching Cyrus stomp around Port Charles screaming about his mommy, which has gotten tiring. And Sonny’s storyline is still the pits. There is no entertainment in watching him dealing with his bipolar disorder while working in a bar, but Nina calling Phyllis at the end of Friday’s show and Sonny answering the phone might finally mean some developments.

Now that the truth is out, and Nina knows Carly and Jax lied to her about Nelle for months, Nina’s found herself betrayed by yet another man she loves. Watching Nina call Jax out for protecting Carly by keeping the truth from her, not protecting her from knowing her daughter was baby-swapping Nelle, was oh so delightful. She’s finally realized what everyone has told her, Carly will always come first! I can’t wait when she finally gives Carly hell too.

It doesn’t look like Nina will be forgiving Jax anytime soon, and Valentin will no doubt use this to his advantage to try and get back in Nina’s good graces. I hope she decides to take time and focus on dealing with the truth and the fact that she has a grandson in Wiley. Seeing her interacting with him will drive Carly nuts. And did it sound like on Friday’s episode, when she was talking to Jax about making decisions regarding Wiley, that she was contemplating going for custody of him?

As for Carly, she better take Jax’s advice and contact Diane, because eventually, Nina will want to know exactly what the circumstances of Nelle’s death were. Between Nelle’s death, and kidnapping Florence, Carly is digging herself a deeper and deeper grave, and I’m enjoying every minute of it! And Jax going down with Carly is the icing on the cake.

The anniversary of Nathan’s death brought his loved ones out to the cemetery to visit him. The scene with Maxie, Britt and Nina bonding as a family brought together by Nathan was touching, and here is hoping we get to see more girl time between these three. Maxie definitely needs some girlfriends with Lulu gone, and as Britt pointed out, she’s never had any. I’d even be down for Ava joining their circle because Nina and Ava’s friendship is also fantastic.

Britt is a delight. Her bringing up how she and Nathan almost slept together before they realized they were siblings? LMAO. And then “baby-switching Nelle Benson?” as Maxie shoots her A Look? Ahahahaha. #GH

At the same time, tensions got a little high at the cemetery. Last week I was really looking forward to Maxie’s reaction to Peter’s article, and I was glad she didn’t hold back. She let him know she was not a Francophile, but Franco’s shown no evidence that he’s a danger to anyone anymore, and Peter’s article was in part responsible for what happened to Dante. It appears Maxie is starting to question who Peter is, as she had a mini-meltdown at the cemetery when Britt suggested if she wanted people to like her husband-to-be then pick a different guy to marry. As she so eloquently put it, he’s the son of a Euro-trash monster. Maxie mentioning everyone who doesn’t like Peter, including Jason who is never wrong, is really eating at her. She doesn’t seem to be at the point of accepting what’s right in front of her, but it looks like it won’t be long before she can’t avoid it.

Britt then faced off with Peter at the gravesite, and she didn’t hold back and it was wonderful watching Peter squirm as his own sister called him out. Not only did she tell him he was nothing like Nathan, but he was also more like their dad. I thought Peter was going to have an aneurysm on the spot, which would have been a fitting end for him. Under her breath, Britt saying she hated having to admit her mother was right, was a nice bit of humor. Kelly Thiebaud was fantastic in these scenes and must be utilized more going forward.

And Then There’s Mommy Anna and Protector Valentin

Anna is finally connecting the dots between Dr. Kirk treating Obrecht, Dante and Franco. That Franco is having memories of Peter talking to Drew Cain before either was in Port Charles has her finally realizing who Peter is, and how deeply involved in his father’s plot he was. Yet it seems she’s still holding out a glimmer of hope that she’s wrong.

More: What you need to know about Firefly Lane

Valentin meanwhile, after hearing Peter spewing vile at Nathan’s grave about replacing him, warned him that Obrecht may be back, and people are putting the puzzle pieces together regarding Franco’s memories. Oh, Valentin, I’m so disappointed in you! It seems he’s just as protective of Peter as Anna is, thanks to his feelings for Anna. If Anna and Finn end up imploding over all the lies and secrets surrounding Peter, I would love to see Valentin and Anna finally explore a relationship. But then again, Brook Lynn is out there waiting in the wings to return with Valentin’s baby.

With a little prodding from Anna, Finn took matters into his own hands to do a DNA test and find out if he’s Chase’s father or brother. The conversation between Finn, Gregory and Chase really laid it on thick how different Chase is from Gregory when it comes to seeing the world. It was adorable that they referred to him as a puppy because it’s so true at times. Anna’s suggestion to Finn that even if he learned he was Chase’s father, it didn’t mean he had to reveal it to anyone, will likely come back to bite her in the butt if it ever comes out that she’s not Peter’s mother… and all soap secrets eventually do. I just hope Jackie, who is onto Finn, doesn’t pull off a classic soap plot and mess with the DNA test results.

These are just my opinions on this week’s episodes. Please join the conversation below and share yours.

Get your free daily soap-opera fix for General Hospital — and all of the other daytime dramas — delivered straight to your email inbox by signing up for Soaps.com’s newsletter. Also, be sure to check out our photo gallery of the haracters who need to return for Pine Valley.

With Nina on the Cusp of Learning...