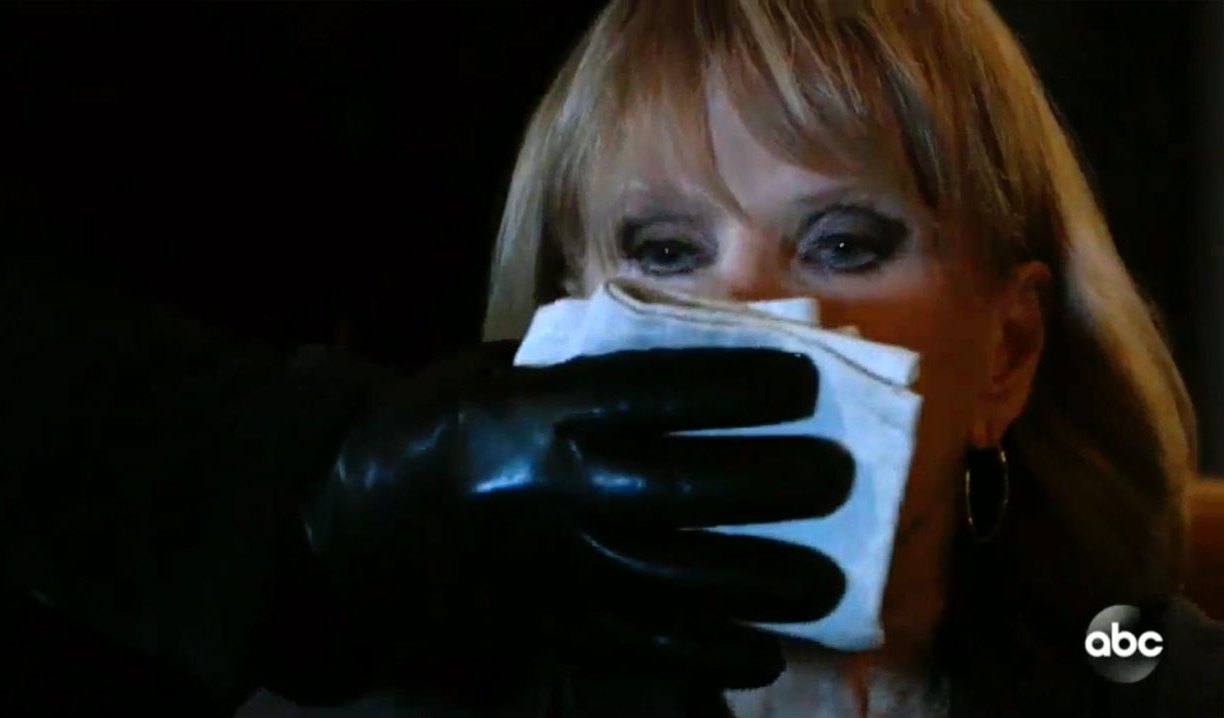 It was the week of The Nurses Ball on General Hospital, though this one was very different due to the times. In order to explain the lack of large crowds, they turned the ball into a telethon and the audience was working the phones. It was a creative way to keep the cast and crew safe and limit the need for a lot of extras. However, some wondered why ABC didn’t use the opportunity to display numbers where viewers could make real donations to support the frontline workers.

I was thinking the same thing. I don't know what they didn't take the opportunity to actually raise money for front line workers. #GH

Ava’s big portrait reveal was marred by a graffitied painting, with Nikolas looking like the most likely culprit. I don’t know how Franco thought he was going to fix that Planet of the Apes nightmare, but I would have liked to see the original. The sexual tension that built between Nikolas and Ava after she learned of his plot with Spencer was smoking hot, and I didn’t think I would actually buy Ava and Nu-Nikolas as a couple. I actually was bummed out that they didn’t kiss. And Nina pointing out that Ava is seemingly looking at Nikolas with a look of real love was fantastic.

In last week’s General Hospital column, I vented how frustrating Friz was becoming, especially Liz. She continued to harp on Franco and his past to the point that every time she opened her mouth it was like nails on a chalkboard. I was at the point that I was going to start rooting for Franco and Ava to actually hookup. Thankfully Liz, hiding in a bathroom stall, overheard Ava spill the beans about the jealousy game she and Nikolas have been playing with one another to try and invoke the infidelity clause. She brought Franco up to speed on Ava’s game but doesn’t realize Prince Nikolas is playing his own. Fortunately, Franco seemed to be on to him.

You’re having my baby

In true Nurses Ball style, a big secret accidentally was revealed when Maxie didn’t realize her microphone was on while discussing being pregnant with Lulu. Peter was thrilled, though it seemed convinced of a happy future for them. Valentin warned Peter whatever he was keeping from Maxie he should tell her now before it’s too late. It’s already too late, as in Peter’s secrets should have come out months ago. The powers that be need to stop dragging this story out. That kid will be in college before Peter is exposed at this rate! And Anna seemed happy for them, but the lingering question of whether Peter is hers or Alex’s child is still on her mind. That’s another answer we needed about five months ago. Hopefully, Spinelli will at least expose Peter soon.

More: Who may blow up Jason and Sam

In a shock to probably no one, Taggert returned alive. From the moment he died, viewers speculated Jordan and Sonny conspired with him to fake his death. And the mysterious calls Jordan made from a burner phone fueled that speculation. Now he’s back and wants to kill Renault, which Jordan pleaded with him not to because it would ruin his life. Their lives are pretty much ruined as is, so why not take Renault out. Actually, why not just let Sonny and Jason do it, because neither one of them will ever go to jail.

Kidnapped with a kangaroo

Nelle blackmailed Julian into helping her with her kidnapping of Wiley plan. And while he was busing trying to snatch the kid, Brook Lynn confronted Nelle after overhearing her talking about the plan. Why oh why she just didn’t call the cops immediately … oh wait, this is a soap where nobody acts normally. Nelle slashed at Brook Lynn across the throat during the confrontation, setting up the storyline any avid soap watcher can see coming… Will the singer ever sing again? Fortunately, it appears Nelle isn’t getting away this time, and Friday’s cliffhanger had a frustrated Julian pulling a gun on her before she could flee with Wiley. Thank the stars Julian stopped being such a wuss! Now if he’d just do everyone a favor and take care of Nelle…

Even though the ball was a telethon this year, the show must go on, and that means performances! However, the performers are getting a little repetitive at this point. Oh look, Valentin is singing another song to Nina. Ned and Olivia perform another duet. The kids sing a song together. There was nothing really new this year, and I desperately miss Obrecht’s outrageous numbers.

This is an opinion piece. Sign up for our daily newsletter for the latest news, spoilers, and recaps sent straight to your email, and join in on the discussion on the week in the comments below.