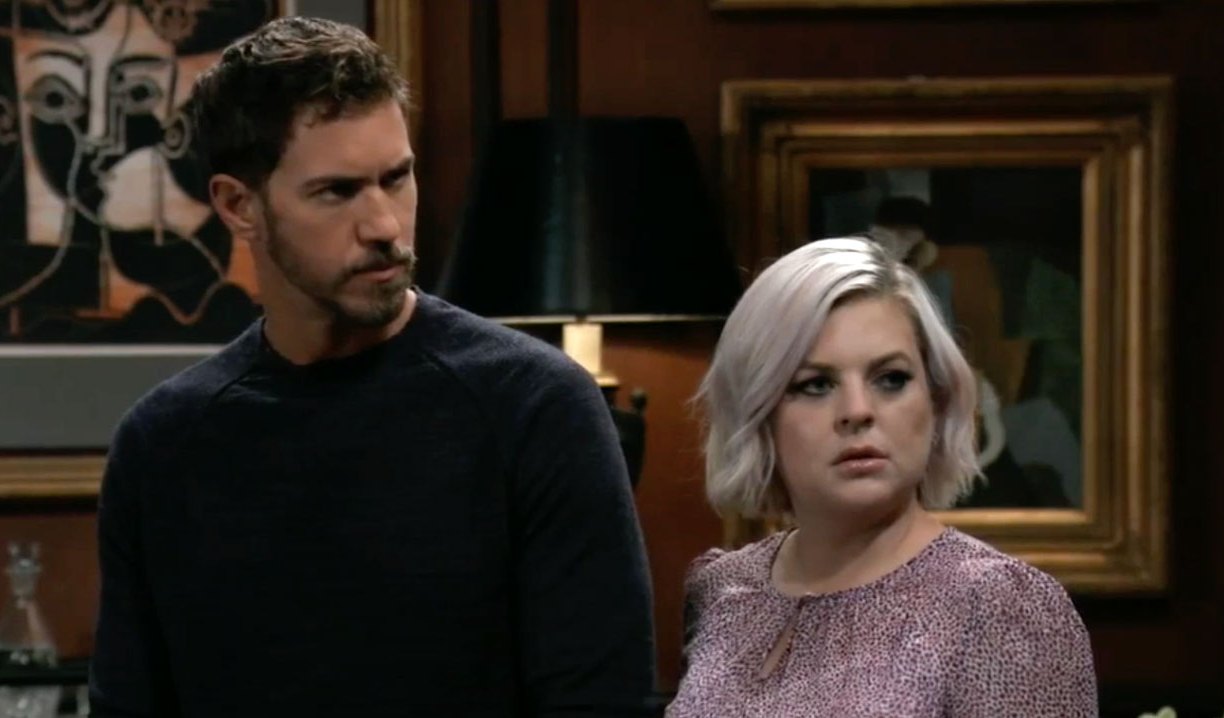 The second week back, General Hospital continued to drop bombs and move along quickly. However, in these uncertain times, it would be nice to see a little less of the bad guys winning and some happier storylines. Even the happier ones are a double-edged sword. While the week brought good news for Michael and Willow, Chase and Sasha are still miserable. And while Sam and Jason can be together now, it came at a huge cost.

Willow’s mom coming out of nowhere with that comment to her daughter to stay close to Jason so he will keep her safe was bizarre. Lorraine, aka Harmony, did once make a comment to Jordan about them both having to do Cyrus bidding to keep their loved ones safe. But what does he have on her? Also, Carly’s comment to Sasha and Chase that she really believes it won’t be long before Michael and Willow are a real family with Wiley made me want to lose my lunch. All they do is sit around and talk about Wiley and nothing else. Boring!

Jason wakes to a shock

In last week’s Deconstructing GH I thought it would be a nice twist if Jason woke up and was Jason Quartermaine again. Alas, that didn’t happen, but he was at least less than pleased at Sam’s deal with Valentin to get Deloris off her back. It was nice seeing Jason stick up for his family, and Sam giving away the children’s legacies. Sam was just talking about having to consider the consequences of her actions on her family, but it seems all she cares about is being with Jason once again. On a lighter note, Carly’s joke about buying Jason some more colorful wardrobe was great!

What the hell Lucy? So Valentin put out a veiled threat that if she didn’t vote his way he’d what, pull his funding from Deception? She could have replaced it with a deal with the Quartermaines. Then again, that would be logical, and I forgot soaps aren’t logical. The powers that be at least have thrown a quick re-write in and made this about Valentin being a smart and savvy businessman and seeing an investment opportunity in ELQ and not his temper tantrum against Michael for siding with Sasha. And what did he think Nina was going to do when he revealed the news to him? I loved her basically “whoop-de-doo!” response.

When the stuff hit the fan, a fuming Ned threw BLQ out of the Quartermaine mansion. Brook Lynn, as grating, as she is on my nerves, made a good point that she did what she did to help herself when her dad wouldn’t, and other Quartermaines and Sam also sold out. As much as I hate seeing Ned and Olivia’s relationship troubles mounting, it was nice to see Olivia getting her fire back and not turning her back on Brook Lynn like her father did.

Don’t even get me started with Renault and the hospital board. Not only did they accept his offer but they made him the chairman. They must all be hooked on his drugs because even though he was freed, it doesn’t mean he’s not a criminal and a drug lord. This storyline is completely ridiculous. The only thing that piqued my interest was whatever, or whoever, Curtis found out he is hiding in a house somewhere.

Welp! Mobster Hospital it is! #GH

Fans either seem to love or hate Friz, and I’m one that loves them. But right now I’m not fond of them. Franco becoming more and more jealous of Nikolas and Liz’s returning friendship, and Ava stirring that pot, is annoying seeing as Franco is one of her only friends. And now Liz is becoming increasingly unsupportive of Franco’s work, claiming she doesn’t like his past being used to bolster his career. This is one storyline I wish the writers would have dumped upon return.

Franco & Elizabeth are smart people. By now they should be realizing their so called friends are manipulating them. #Friz #GH

The reveal that Nikolas and Spencer are working together to get rid of Ava by acting like Spencer is still ghosting his father was a nice twist I didn’t see coming. However, Lulu was right in telling her brother he’s still focused on revenge and now has Spencer involved. Ava’s party to unveil her portrait brought out all kinds of juicy drama. Ava seemed on the cusp of doing the right thing and letting Nikolas go when her portrait was unveiled to looks of horror. Is Franco’s past coming back to haunt him? Or did Nikolas tamper with the painting? We’ll have to wait till Monday to find out!

These are only my opinions. Sign up for our daily newsletter for the latest news, spoilers, and recaps sent straight to your email, and join in on the discussion on the week in the comments below.