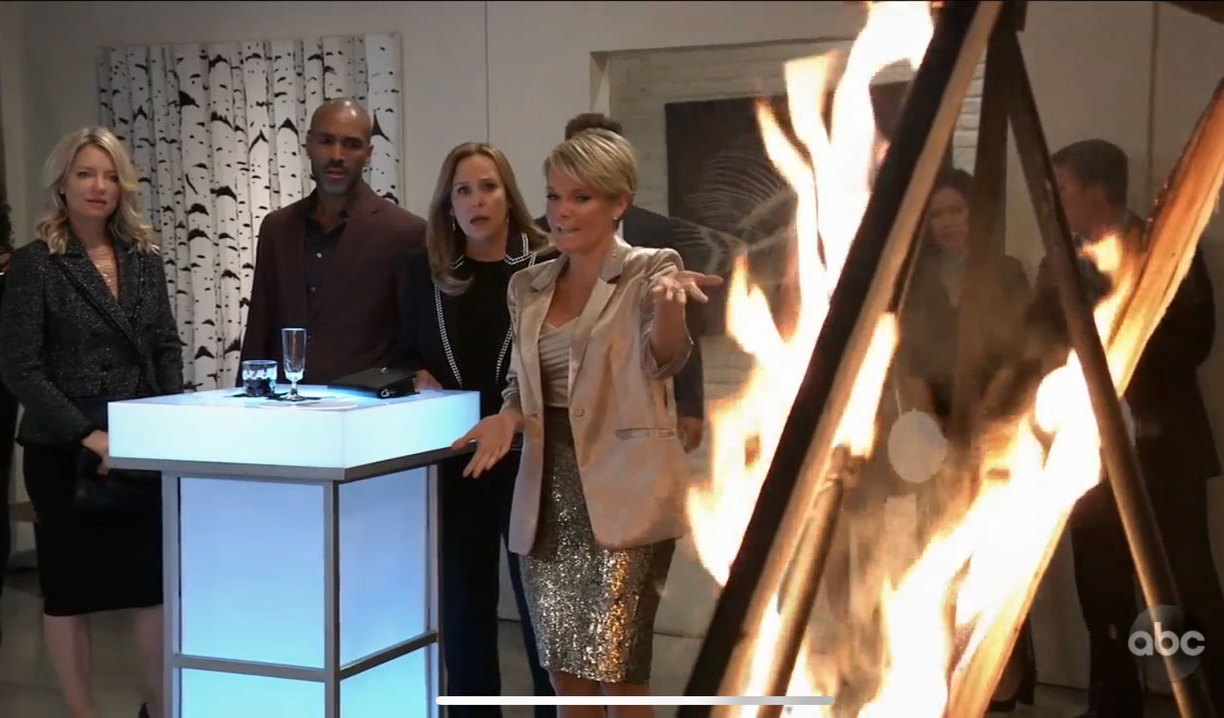 This week on General Hospital, Liz and Cam got a miracle before Christmas. There was a lot of excitement at Ava’s gallery. Valentin’s fall could be imminent based on his actions. Let’s dive in like Dustin did to save Charlotte!

While Franco remains a divisive character for many, I was glad to see Andre’s memory mapping procedure was a success. Going into this holiday season with nasty Nikolas and Mike’s memory fading was sad enough, so it was nice to see Elizabeth and her family get some joyous news. Unfortunately, the happiness quickly faded. Franco learned about Drew’s “death” and that his body had sex with Kim. Ouch! Even with Franco back, something tells me this is far from over. Peter is temporarily relived that “Drew” is gone, but I could see Franco starting to have flashes of Drew’s memory in dreams and being the one to recall the true nature of Peter’s crimes. Peter has to be brought down at some point and Drew may be the only one with the goods to do so. Meanwhile, even Anna is beginning to doubt her son as Jason’s theory about him was getting to her. By the end of the week, she found a connection between Peter and Bryce. Peter probably shouldn’t be getting ready to ring in a happy New Year just yet.

All that glitters is gold

Can we talk about how amazing Maura West looked this week? I rarely comment on fashion and hair, it’s just not my thing unless something is completely atrocious. But Miss Ava was serving up some early eighties Solid Gold disco realness in that gold outfit and complimentary make-up job. She also opened a can of whoop-ass on the gallery patrons who came to bid on Helena’s portrait, which went up in flames at the end of the auction. That was a nice unexpected twist! Later she confronted Nikolas and rightly told him off for all the suffering he had caused his friends and family for playing dead these past few years. This is one of the problems with Nu-Nik. His revenge plots against Valentin and Ava have come at the cost of leaving his loved ones to believe he was dead, which is cruel. Though the painting is gone, Ava has the codicil and is now in control. This has been a great turn of events and finally, the storyline is heating up, just like Helena’s portrait.

Here we go again with the powers that be causing trouble with Sonny and Carly. Love them or hate them, the constant need to create problems for this couple can get old. It would have been refreshing if just for once Sonny could have trusted Carly when she told him that she had things under control and to trust her because if he knew what she did, it would only make things worse. But he can’t be in a position of not having control and his meddling into Carly and Jax’s problem will most likely make things worse. Carly’s fear that Sonny will use Jax’s involvement with Nikolas to get Jax deported seems unfounded. Sonny likely learned his lesson last time and would not risk hurting Joss again and breaking up his family. A lot of viewers on social media are also finding the deportation story and threats in poor taste given the current political climate we live in.

#GH Please drop the deportation threat. In these times, it’s a bit insensitive.

Charlotte’s polar bear plunge into the Port Charles harbor led to a whole host of problems for Lulu. Valentin lashed out at her for being a careless parent and somehow managed to even turn Cassandra kidnapping Charlotte on her because Charlotte was with her at the time. What an arrogant jerk. His venomous attacks on her as a parent and vowing to get full custody of Charlotte clearly were to make the viewers angry with him, setting him up to be taken down by Nina at their New Year’s wedding. Between Nina’s plan to bring Valentin to task and Nikolas trying to reclaim his birthright, 2020 is not looking to be Valentin’s year. Even if he goes down, we can never count Valentin out. Oh, can we talk about the missed opportunity for a shirtless Dustin scene after he dove into the water to save Charlotte in all his clothes? Tsk tsk!

These are only my thoughts on the week. Please leave your own in the comments, and I hope everyone has a happy holiday season next week!