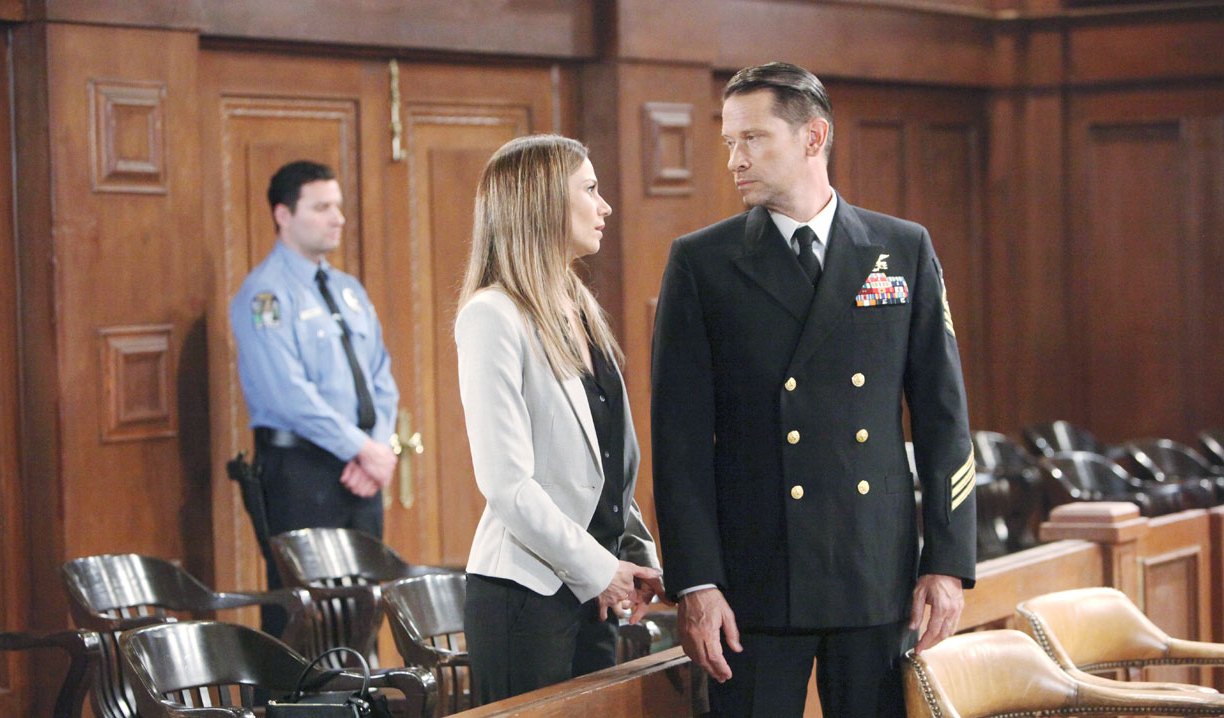 This week on General Hospital, one baby secret was finally revealed, while Brad and Nelle’s still remains to be exposed. Everyone thinks Ava is paranoid but is she? And “Drew’s” trial to live his life as he saw fit was held, which was as frustrating as anticipated, but Scott was in it to win it.

Franco’s competency hearing began, and both Scott and Martin were ruthless. Scott was the best he’s been in a long time and really went in for the kill with Kim, asking if Cam’s memories were put into Oscar if she’d just give up on fighting for her son, why “Drew’s” life matters more than Franco’s, and then revealing her attempt to drug and rape the real Drew. The shockwaves that sent through the court were epic, and even “Drew” seemed stunned. Unfortunately, Kevin testified that “Drew” was in complete control of his faculties, unraveling Scott’s entire case. We have to wait until Monday to find out how the judge rules, but it doesn’t look good for Liz. However after Kim’s revelation, one has to wonder if “Drew” will still want a life with Kim.

I gotta give #gh some props SOME of this dialogue from the trial is actually pretty good.

Hayden was finally forced to come clean with Finn about their daughter Violet, and he was simultaneously thrilled but furious with her. Hayden’s excuse for keeping the truth from Finn was pretty lame, but at least she told him and also admitted she’s still in love with him. Anna better get home fast, because things are going to get complicated. When this information spreads, cranky pants Robert is going to be dancing on air. He just can’t stop meddling in Finn and Anna’s relationship and hounding Finn over his ex. He’s acting like a jealous lovesick puppy waiting for Anna and Finn’s relationship to end so he can swoop in on her. While Anna and Finn have been enjoyable, Violet may be the key to Hayden’s wish and bring Finn back into her arms. Hayden and Finn still have amazing chemistry.

After learning of Sasha’s secret, Carly immediately hoped Michael had dumped the liar and was stunned when he revealed he hadn’t. He even stood up to his mom, who later agreed to give Sasha a second chance. In a shocking moment, Carly even acknowledged her own misdeeds and that what she did to Bobbie when she came to town was far worse than Sasha’s crimes. Of course, it remains to be seen if Carly is sincere in giving Sasha a second chance because she just can’t seem to let her kids live their own lives.

Paranoia or too many martinis?

Someone appeared to be spying on Ava from the shadows, but Julian and others think it’s PTSD, paranoia, and too much day drinking. However, Ava seems to be correct about being watched. Who could be following her? Again, many are hoping this storyline with the codicil will bring Nikolas back, and Nikolas and Ava did grow close right before he “died.” Helena’s portrait ending up in Ava’s hands, thanks to Dev, looks to pull her into the codicil storyline. It would be nice to see Ava be a part of taking Valentin down finally. Meanwhile, Ava’s scenes with Trina and her hiring the young student as an apprentice were well written and acted. It is nice seeing the caring side of Ava, and Sydney Mikayla as Trina is a terrific young actress and hopefully, we will see much more of her. She was also exceptional when she read Joss for constantly wallowing in her grief over Oscar and not being there for Cam during Franco’s trial.

What a breath of fresh air this Trina is for Ava. I am looking forward to seeing why their paths are crossing, but either way I find it pleasantly interesting. #GH #TeamAva pic.twitter.com/ih7xiebPvc

The fact that Valentin was so annoyed by Spencer sending Nina a bottle of wine because he thought their wedding fell through was laughable. Spencer seems to be able to push his buttons like no one else. Meanwhile, Ava questioned her new frenemy Nina taking Valentin back and warned her that Valentin would never change. Tense words were exchanged, but Nina assured Ava she was nobody’s fool. Could Nina really be playing Valentin after all?

Dev used the money he earned from selling Helena’s portrait to Ava to purchase candy bars to hock at school for a profit. Who cares? The powers that be are shoving this character down the viewers’ throats with the least thrilling of stories.

These are my opinions on the current episodes of General Hospital. I’d love to hear yours in the comments!