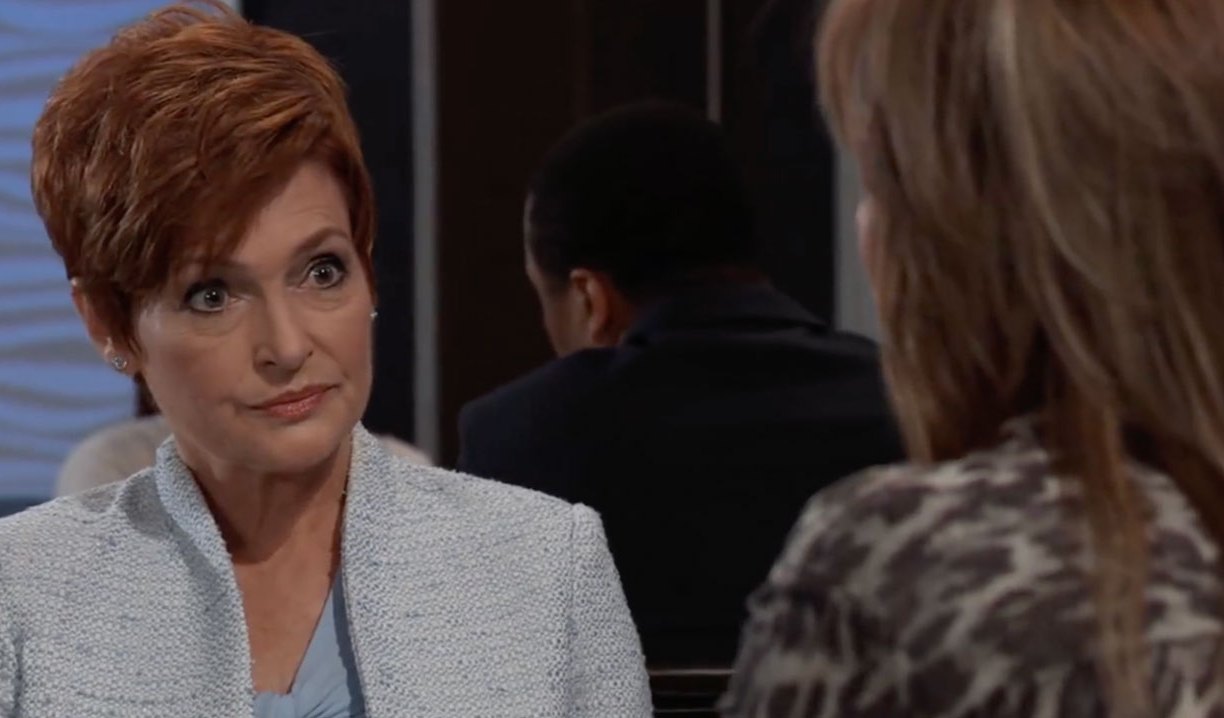 After what seemed to be two weeks of little storyline development, a lot went down on General Hospital this week. There still seemed to be an excessive amount of characters recapping their own storylines, but we are moving forward. A major storm hit Port Charles, which brought a little excitement into some of the characters’ lives.

I said in last week’s Deconstructing GH something would prevent Nelle from telling Michael the truth about Jonah/Wiley. Predictably, a text Michael received from Carly of Sasha holding Wiley set her off, and she kept the secret. Every time it seems there is a shred of humanity in her, she turns around and flushes it down the toilet. Without drastic character development, Nelle looks doomed to become another crazy Heather Webber who escapes every now and then just to wreak some havoc. Except Heather can be fun, whereas Nelle is just awful.

Hearts are going to break

Michael tossing Shiloh out of Wiley’s birthday party was hilarious, and we need more of this side of Michael. Unfortunately, my focus was on Willow, who is starting to bond with Wiley and has accepted Brad and Lucas’ invitation to be a part of his life. Whenever the truth comes out, she will be another casualty of the baby swap. With Shiloh giving Brad and Lucas his medical records, hopefully, Lucas will notice something and start to question things.

Shiloh not only has Drew’s flash drive, but he has Dr. Cabot working for him to transfer Drew’s memories into Jason.  Apparently, we’ve forgotten, or Shiloh doesn’t know, because of Jason’s brain injuries, he can’t be brainwashed. That’s why Helena and Faison needed Drew. Drew knows about Shiloh and Tex’s stolen fuel scheme and apparently where Tex may have stashed his cash, which Shiloh needs since he’s out of financial resources. With Finn running into Cabot, Curtis and Drew putting the pieces together about the stolen fuel, and Shiloh flagrantly committing crimes out of desperation, I really hope this means the end of Shiloh, or at least this storyline is at hand. I’m also glad that they are exploring Drew’s past, though it seems it’s too little, too late. Billy Miller announced he’s leaving General Hospital, and we don’t yet know if Drew will be recast. Even though the powers that be dropped the ball with Drew’s character, I can’t see him leaving Port Charles, Scout, and the only remaining family he has. If the part is recast, I hope they actually develop the character more.

We finally got the story behind Dr. Neil’s late daughter. Trapped in the Metro Court elevator with Alexis during the storm that hit the town and caused power outages, Neil finally opened up. Joanna was in a cult and ended up taking her own life. Sadly it was the fifth anniversary of her death, and he was on his way to mark it. Alexis reached out to him and sang Papa’s Gonna Buy You A Mockingbird, which Neil joined in on. Neil and Alexis have crossed so many doctor-patient lines that it’s time for them to break up so they can date as Diane said. Diane’s conversation with Alexis about Dr. Sexy, and how long it had been since Alexis had experienced the pleasures of a man, was hysterical. We need more Diane and Alexis moments! It’s the humor that’s lacking on General Hospital right now, especially with all the Shiloh doom and gloom.

😂 okay! I would have bet money for sex in the elevator! Wow what a bummer…

I swore they were going to go at it! Alexis is like a ticking time bomb.

Valentin and Nina’s dinner party was a hoot. Valentin serving martinis, one laced with truth serum for Jax, but thanks to the storm was mixed up with the other drinks, was a classic drugged drink twist. Unfortunately, Hayden got the drugged martini and immediately began confessing to Finn that she’s never stopped thinking about him. Oh brother! It’s too bad she didn’t tell him, and us, where their child is. We still don’t what know Jax and Hayden are after, but it’s apparently hidden in Nicholas’ old office, and thanks to Hayden getting caught, Valentin and Nina know they are looking for something on the old estate. I do love a good soap mystery, and this one has me hooked finally.

The return of Cassandra

Cassandra turned up in Puerto Rico, on Sonny’s island no less, where Michael and Sasha were vacationing. Someone powerful is helping Cassandra lay low, and she contacted them about being moved again. I am definitely in camp Nikolas helping her. After all, the enemy of your enemy is your friend! Before heading off to her new location, she drugged Sasha’s breakfast with a mystery concoction. I really hope this is not the extent of Cassandra’s return and it will be another year before we see her.

These are simply my opinions on this week’s shows. Please leave your own in the comments.

Deconstructing GH: The Absence of...