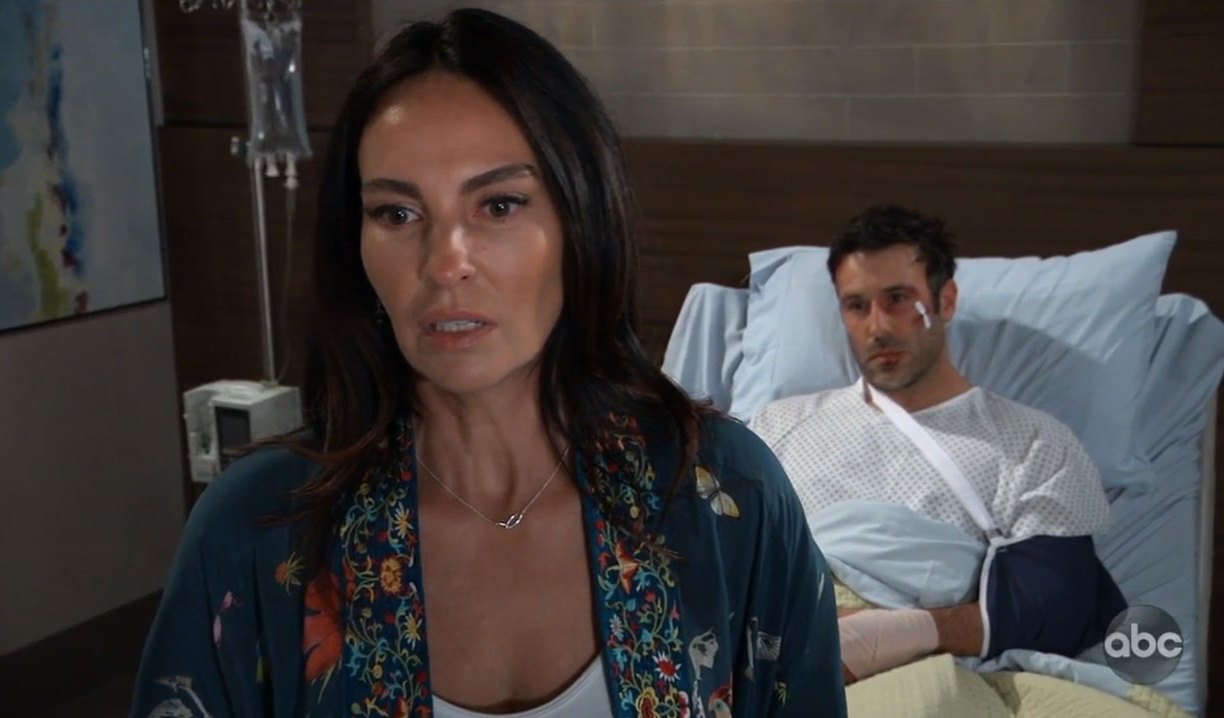 This week on General Hospital, Shiloh slithered himself out of trouble with the law and learned Willow did have his child, Nelle and Ryan became fast BFFs in Pentonville, which can’t be good news, and Oscar’s presence continued to loom over many.

The law is a joke in Port Charles

I ranted in last week’s Deconstructing GH that Harmony was a pathetic person for selling out her own daughter yet again to please Shiloh. This week she went even further claiming she was the one who drugged the tea given to Sam and Kristina, and Shiloh didn’t know. I think the powers that be are drinking some kind of tea expecting us to swallow this load of bull. First, Shiloh made it clear Harmony wasn’t going to be there, and he only recently summoned her back from Beecher’s Corner because he learned about Willow’s baby. Second, Shiloh was still going to rape Sam, who was clearly drugged and saying no while trying to push him away. How is this being ignored, or that he abducted the drugged Sam and took her to the lighthouse. This is why criminals never go to jail in Port Charles!

The ridiculousness of Shiloh getting everyone to tell him things because one, they are also an avid fan of his book or two, just because he smiles at them, is getting old. I hope Diane did as Willow asked and destroyed her records because otherwise, it’s all going to come out one way or another. I’m sure Diane’s legal clerk is a fan of Shiloh and will just gladly hand the records over to him. In a recent episode, Julian warned Brad a DNA test could blow everything up, which could be foreshadowing. Oh what am I thinking, we all know the DNA test will be switched to keep this storyline going.

How they got away with kidney theft

The flashbacks of how Curtis and company worked together to pull off switching Ryan and Kevin so that Kevin could agree to donate the kidney were phenomenal. However many wondered how Jordan managed to put this all together so quickly when she can’t seem to solve any other case! Ryan waking up in Pentonville and realizing he had been duped by Finn and Kevin was a great scene, but his threat to return and make them all pay was chilling and seemed like a tease of what’s to come. Then there was his meeting up with Nelle and the two of them becoming fast friends. If these two manage to break out together, watch out Port Charles! And if things couldn’t get crazier, Harmony landed in Pentonville and is nutty Nelle’s new roommate. This show is on crazy overload at the moment! Are they trying to compete with Days of our Lives?

@BlueWizard75 did Jordan pick the worst time to catch onto a plot quickly or what? guess the kidney made her a supersleuth

How did Jordan figure that out so quickly? And why can’t she do that with her other cases? 😂😂😂

In Tanzania, after spreading Oscar’s ashes, Kim was overcome with altitude sickness and envisioned she was talking to Oscar and felt if she had told Drew about him sooner maybe they could have been a family and given him a sibling. She woke up remembering the idea of a brother or sister for Oscar. I’ve always expected Drew and Kim to have grief sex over Oscar’s death, but they haven’t gone there, at least not yet. Now Kim is thinking about a baby. Is she going to jump Julian’s bones, who has enough baby mamas as is, or is she going to try for another Oscar and get it on with Drew? Her character has no real point anymore, outside of being Julian’s love interest, and a baby would better connect her others in town. Meanwhile, Joss is dealing with unresolved feelings about Oscar’s death, so Maxie came up with the brilliant idea of hosting a seance to communicate with him. What could possibly go wrong? I’m actually looking forward to this, but fear the whole thing will play out as hokey and stupid. General Hospital does love their ghosts though.

I’ve really liked Neil since he was added to the cast. Joe Flanigan is a great actor and Neil has been good for Alexis. It seems inevitable they’ll cross that doctor-patient professional line at some point, but for now, the writers seem to be actively trying to build his character up by hinting he had a past family and things didn’t go so well with them. Right now I’d like more Neil and less Shiloh.

More: Dr. Navarro and other summer dayplayers on General Hospital

There have just been too many mentions of tests for the baby by Carly’s OGBYN for something not to go wrong. The only thing General Hospital likes more than ghosts is killing children. I’m hoping they won’t go there so soon after Oscar, but something is likely going to be wrong with the Carson baby.

These are only my opinions on this week’s shows. Agree or disagree, leave your own in the comments.

Alicia Keys and Brandi Carlile Release Get-Out-the-Vote Duet, ‘A Beautiful Noise’: The Story Behind the Song