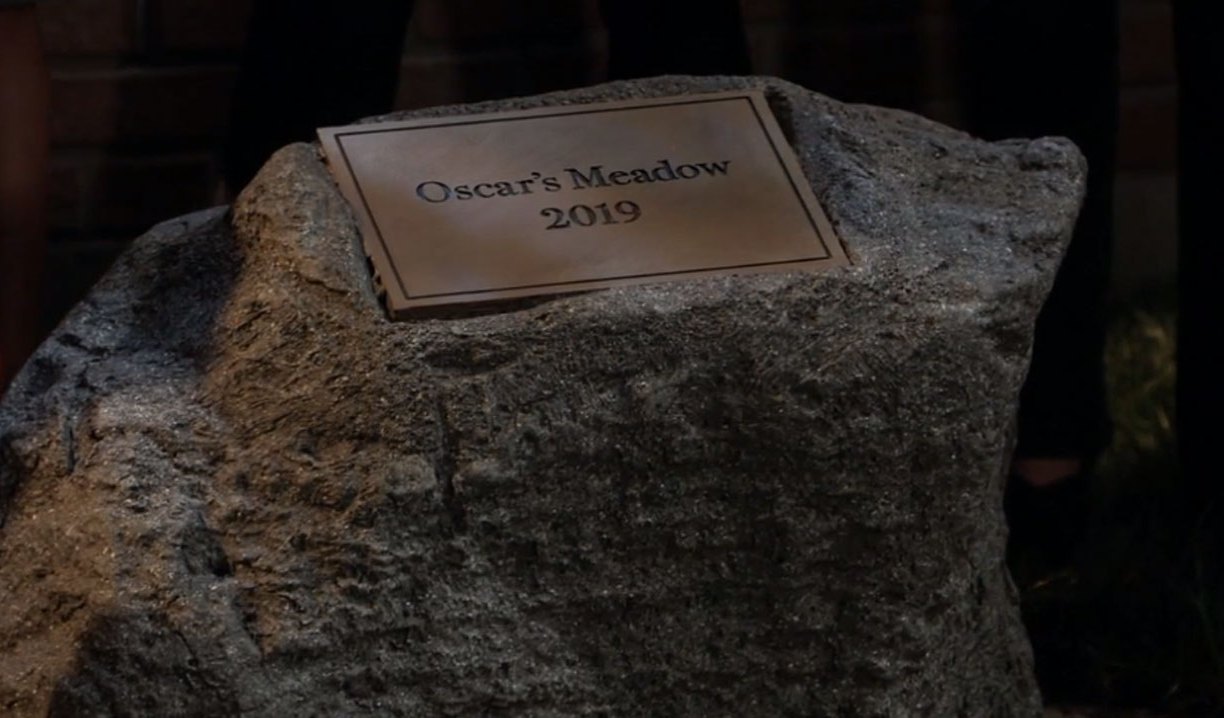 This week on General Hospital, Oscar’s family and friends said another goodbye to him, Ringgate continued, and Ryan was back with a vengeance. The end of the week saw the start of The Nurses’ Ball, which hopefully will bring some happy moments, which are definitely needed right now.

Monday’s episode was another tear-jerker, centered around Oscar’s memorial party. Thankfully they sparred us the funeral! These shows have been amazingly well acted, but so depressing. I thought the idea of a meadow of flowers in the park for Oscar was a nice touch, but absolutely adored Oscar asking his dad and Uncle Jason to build a treehouse on the Quartermaine estate for Scout, Danny and the other Quartermaine kids to come. I hope we get to see that scene and see Jason and Drew starting to bond. It was also nice to finally see Sam show up for Drew at the memorial, taking time out from her ever important Dawn of Day mission. Meanwhile, weeks ago I pondered that in their state of loss and sorrow that Drew and Kim might have grief sex. I’m still waiting for that to happen, which would probably lead to a surprise pregnancy for Kim. What’s a soap without a surprise pregnancy and who’s the daddy story. Is it Julian’s or Drew’s?

Mike proposed to Yvonne with Finn’s ring, while Sonny and Michael wondered where Mike got the piece of jewelry. Did secret agent Robert and former police commissioner Mac really think they could fool Finn with a “maybe this looks like Finn’s ring” knock off? They should be smarter than that. Then there is Anna, who overheard Robert talking about a proposal while showing Mac and Felicia the ring, and thinking he was going to propose to her, went into a tirade about how marriage isn’t for her. Sadly it seems she somewhat believes it, but a talk with “maybe not her son” Peter seems to be having her thinking about a life with Finn. This whole thing has become a comedy of errors, only it’s not funny. An episode of I Love Lucy this isn’t, but I wish it was so it would get resolved in under 30 minutes.

Nina vs. Willow, round eighteen

Willow found herself in the hot seat with another set of parents over including a book in the school library about a gay couple raising a child, though she never forced any child to read it. Little Bianca’s parents objected to their child being indoctrinated, and Franco called them out for hating “the gays.” When he said that I cringed. I get Franco was trying to use cool, modern lingo, but it came off about as cool as his new hairdo. Nina actually defended Willow, shocking me, but it then took her fifty seconds to go back on the attack. One step forward, two back. Her hatred for Willow has gotten tiresome. Now poor Willow has two strikes against her and found herself fired. Somehow, Shiloh will make the most of this.

The storyline started out with Aiden being bullied and moved in Nina becoming a bully! I can’t even watch her.

Seriously is Nina an adult? Acts like a 15 yr old girl

Up in Canada, Laura and Curtis walked right into Ryan’s trap at the cabin, where he murdered the woman he forced to help her. Genie Francis proved she’s a damn good screamer as she was attacked at the end of Wednesday’s episode. Ryan left them to die in the cabin, which he rigged to fill with gas and explode, but of course, they escaped. At least we are getting back to, and will hopefully settle, the Ryan story before May sweeps are over with.

More: Ryan Paevey in Hallmark’s From Friend to Fiance

Molly was back with a vengeance this week and determined to print a story on Shiloh and Dawn of Day in The Invader exposing them as a cult. It’s good to see Molly taking a stand, which is what she does best. Oh, and of course Sam fears this will blow her and Jason’s plan to get Kristina’s pledge out of the water.  That plan is going nowhere because they don’t even know where the pledges are! Now it seems they are trying to entrap Shiloh by taping her initiation. So has publishing and reporting become the new “mob” on General Hospital? Everyone is a writer or a reporter nowadays. Drew owns a media company, Nina has Crimson, Peter the Invader, Lulu suddenly became a reporter, and now Molly. Oh and let’s not forget Lucy’s book, which I’m sure she’ll plug at the upcoming Nurses’ Ball.

Ready for the ball!

On Friday the Nurses’ Ball began, but it was merely the red carpet fluff episode. While I enjoy the ball, I could do without the red carpet. It’s Port Charles, not the Oscars! The only entertaining part was Jax’s arrival and the fact that he may give Valentin a run for his money where Nina is concerned. Here is hoping that May sweeps will also reveal the truth about Sasha and Valentin’s scheme.

This is only an opinion column. Please leave your thoughts on this week’s shows in the comments.