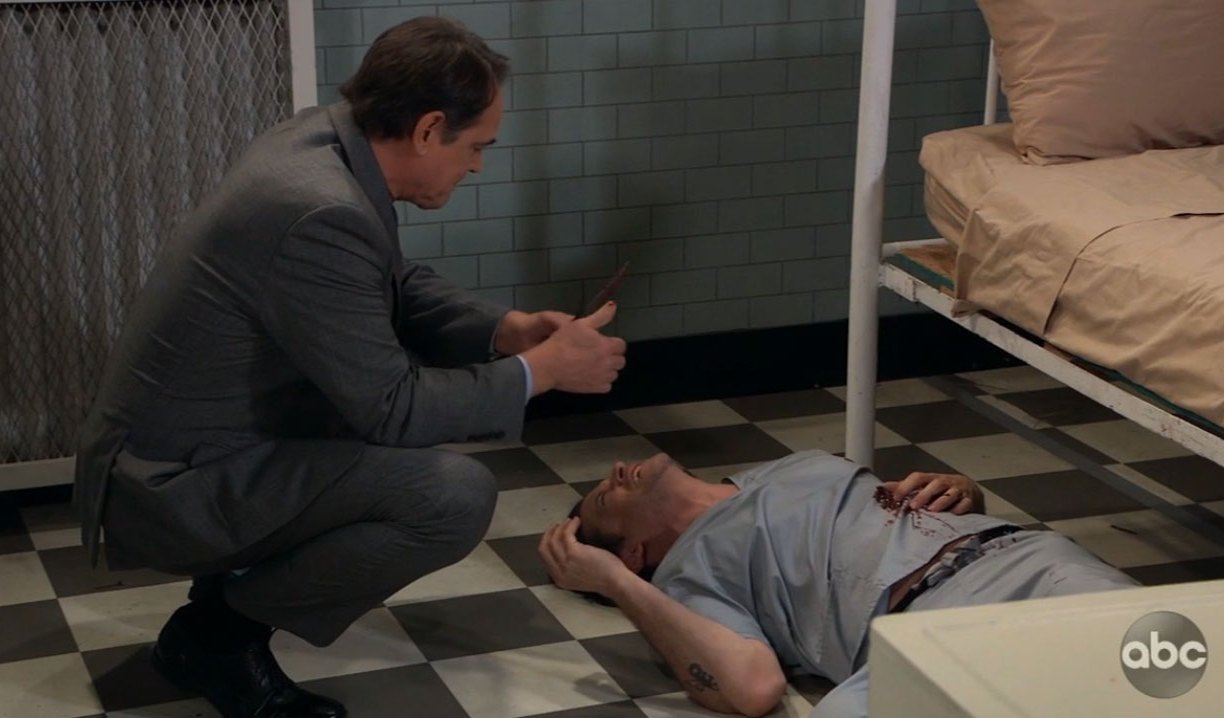 This week on General Hospital, Jordan’s not so brilliant plan to catch Ryan hit a major snag when she got hit by a blinded Drew, and Anna’s been left without answers about what memories are or aren’t hers.

As I ranted in last week’s Deconstructing GH, Jordan’s plan for Franco was terrible, because nobody else knew about it as a backup in case things went south. Granted, Jordan was planning to bring Chase in it seems, but before she could everything went wrong when she was hit by a virus-blinded Drew and is now unconscious and fighting for her life. For the first time in a while I felt sorry for Jordan, but more so for Curtis and TJ. Stella’s talk with Jordan about how she realized how much time had been wasted being angry at her, and she was a woman of good character was nice to finally hear. Vernee Watson and Donnell Turner both shined this week in their scenes.

Roger Howarth was also exceptional in channeling Franco’s creepy dark side in his interview with Lulu. The way he talked about Kiki was frightening, yet at the same time, the fact that he named the other victims by name but called her “the girl” showed how much it hurt him to claim to have killed Kiki. Jon Lindstrom’s confrontation of Franco was also masterful, and Franco’s escape after being stabbed gave us some excitement that has been missing for a while on General Hospital. Franco, clearly tapping into Ryan’s superpowers, was able to make it all the way to Liz’s place without being seen and reveal Ryan is the killer. Naturally, Liz assumed he’s delirious.

It was hilarious that only Chase seemed to be concerned that Laura, the town’s mayor, has been missing. Even Lulu casually commented that her mom hasn’t been answering her phone, and missed Franco’s hearing as if it was no big deal. At least Lulu has been piecing together her memories and what really happened before she was stabbed. Along with Carly, Mac and Felicia, it looks like we are on the verge of Ryan being unmasked. There seems to be a light at the end of this Ryan tunnel!

I know! They’re all like, I’m sure she’s OK. Even Chase is not suspecting anything after talking to like, 5 people who haven’t heard from Laura! Some detective he is! #GH55

And her daughter has already gone through an arraignment and interview w her alleged attacker! Seriously, the #gh time warp really kicked into high gear after slowing down for months.

Anna’s realized that Cabot put some of Alex’s memories in her, but she has no way of knowing which ones are false, only Alex does. It looks like we will be seeing her twin again soon, and many viewers are still hoping Peter will turn out to be Alex’s son. At this point, the twist would be brilliant, though once again something the fans theorized about months ago. It would also throw Peter’s life into even more disarray just when he was finally working through his mommy issues.

Witness the Dawn of Day

The Dawn of Day storyline was cheesy enough what with their therapy sessions and energy healing, but Shiloh taking Sam to “The Tower” to watch the sunrise, aka the miracle of the dawn of day, was just over the top bad. Especially since “The Tower” was just some old lighthouse. The only thing the story has going for it is that I can’t figure out Shiloh’s game. At times he actually seems to be obsessively in love with Sam, but he doesn’t really know her, unless he’s been stalking her for years. Meanwhile, Sam’s explanation to Kristina that she dumped Jason because he was always putting Carly and Sonny before them, and running off and putting himself in danger without giving his family a thought, had me smacking my head. Only a year or so ago she felt that way and it was one of the reasons she pushed Drew, who she thought was Jason, to walk away from Sonny. But Drew wasn’t Jason, and Sam was lost without the real Jason, so what she once felt is being used as a cover story. The entire scene was like watching a bizarre deja vu play out.

A lawyer walks into a psychiatrist’s office

I am loving Alexis and Neil! There is something fun about their banter, and that he doesn’t know her history so he’s pointing out her various flaws, such as nothing is ever her fault. Half the town is going to need a psychiatrist after the truth about Kevin and Ryan come out, so Neil is in for a lot of work.

As always, these are only my thoughts on the week’s shows. Please leave your own in the comments.

Deconstructing GH: Dawn of Day Is...