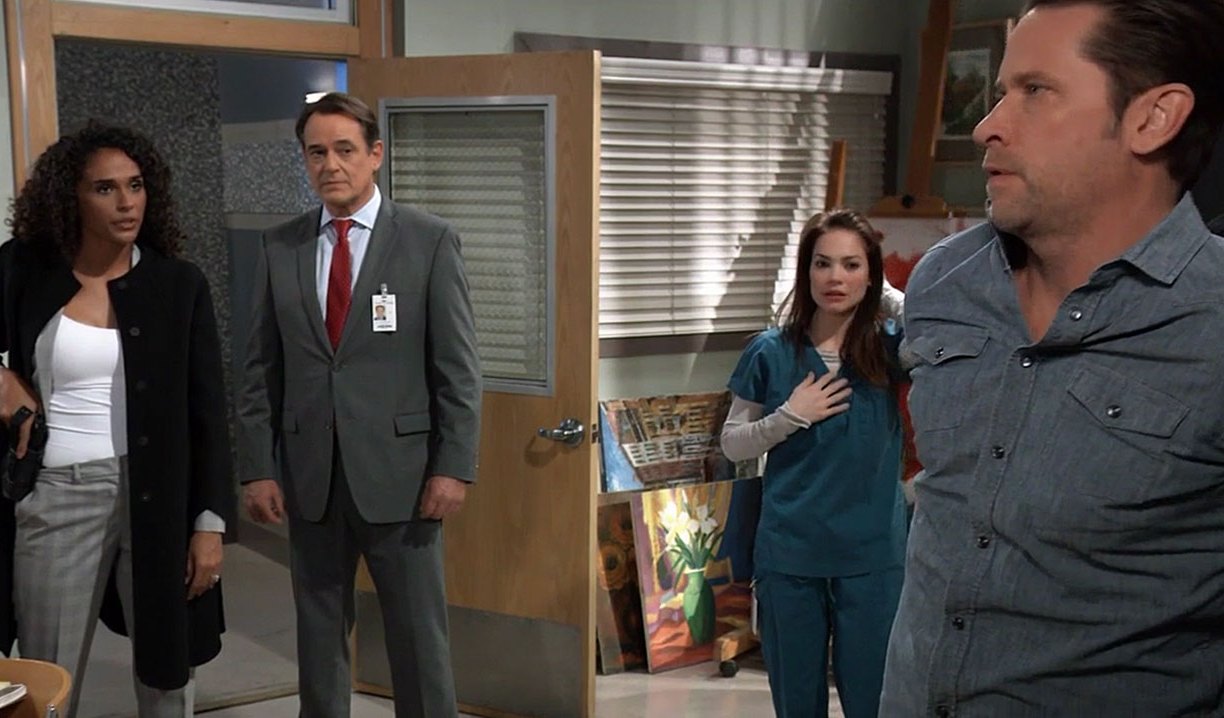 Ryan’s killing spree, and framing Franco, dominated much of the week. Franco proved he’s still a divisive character with the viewers, while little Aiden’s storyline continues to stir up controversy as well.

Uncles Brad and Lucas to the rescue

Aiden’s storyline has become a center of contention for some fans, who feel a gay storyline for an 8-year-old is too much, or the show is reinforcing stereotypes such as baking and ice skating to indicate a child is gay. The issue of stereotyping aside, a lot of the discussions Liz and Franco have had have been open and honest. Aiden is being bullied by the other kids for not conforming to their eight-year-old ideas of gender, and that he’s not acting like the other boys in their minds. Liz has realized while her son may be gay, that’s not what this story is about, in my opinion. It’s about kids bullying someone for being different than them and the parents wanting their kid to feel safe and that it’s okay to be not like others. Liz said she just wants Aiden to be a kid and be happy, and not to have to deal with these issues. But at the same time, because he’s already being teased as gay, she didn’t want him to associate being gay with anything bad or negative, which is why she wanted him to see and know Lucas and Brad. Of course, Brad probably isn’t the best choice of role model for any kid, gay or straight!

More: Maurice Benard as John Gotti this weekend on Lifetime

Franco’s arrest and the keystone cops

Franco’s arrest had some viewers who can’t stand him cheering, feeling this was karmic payback, while others were sympathetic towards his situation. Then there were those who just want the Ryan storyline to end. Watching GH this week definitely felt like an exercise in testing my patience because Jordan’s ineptitude is mind-boggling and frustrating. I’m equally disappointed in Detective Chase, who initially showed promise in breaking the mold of the clueless cops in the department, but has fallen in line with them. When Laura and Lulu told Jordan how odd Kevin’s been acting for months, how he’s not himself, and when Laura stated point blank she thought he was having a mental breakdown at one point, I was hoping a light bulb would go off in her head. Instead, she talked about how much he’s been helping them try to catch the killer, while in other scenes always wondering how the killer is a step ahead of them. Make the madness stop! As I predictably guessed in last week’s Deconstructing GH, Franco apparently has no alibis for any of the murders, and because he was a killer in the past, he’s their prime suspect. Ryan’s planting evidence isn’t helping his situation, and it was nice to see Liz point out that twice before with Carly and Griffin evidence was faked, but somehow Jordan deduced this evidence wasn’t planted… but hysterically it was. Good job yet again Jordan! By Friday it seemed a very small light bulb was going off in Jordan’s head that the evidence against Franco was too nice and neat. I think it’s going to take another murder for them to realize Franco is innocent, and Friday’s cliffhanger had Griffin’s life hanging in the balance as Ryan planned to do away with him and apparently make it look like a suicide. Little moments that made this mess bearable were both Liz and Ava believing in Franco’s innocence.

VOTE! Are you ready for Ryan’s murder rampage to come to an end? #GENERALHOSPITAL #GH55 #GH

The PCPD is acting dumber than usual. I’m really hating the Ryan-framing-Franco stuff. Otherwise I really like the storyline.I think this is a delay-the-outcome tactic. #GH

I have always adored Nina, but this week she reminded me again why she also drives me bonkers! She told Sasha she hadn’t answered Valentin’s proposal because marriage always is the beginning of the end of her relationships. Here is hoping, because the Sasha-scam needs to end. Once again she impulsively reacted to a situation involving Charlotte, Willow telling Valentin she can’t discuss the girl with a non-parent, by deciding she was marrying him again. I do like Nina and Valentin, but they’ve become a self-destructive couple and Valentin’s constant lies have ruined them. Peter looks to be his undoing because it almost appears he’s either figured the Sasha scam out or is on the verge of it, because he knows Obrecht is holding something over Valentin. This has the potential to also impact his relationship with Maxie. If he even suspects it, but doesn’t clue her in, she’ll see it as him also still keeping secrets.

These are just my feelings on the past week. Please leave your own thoughts and opinions in the comments!