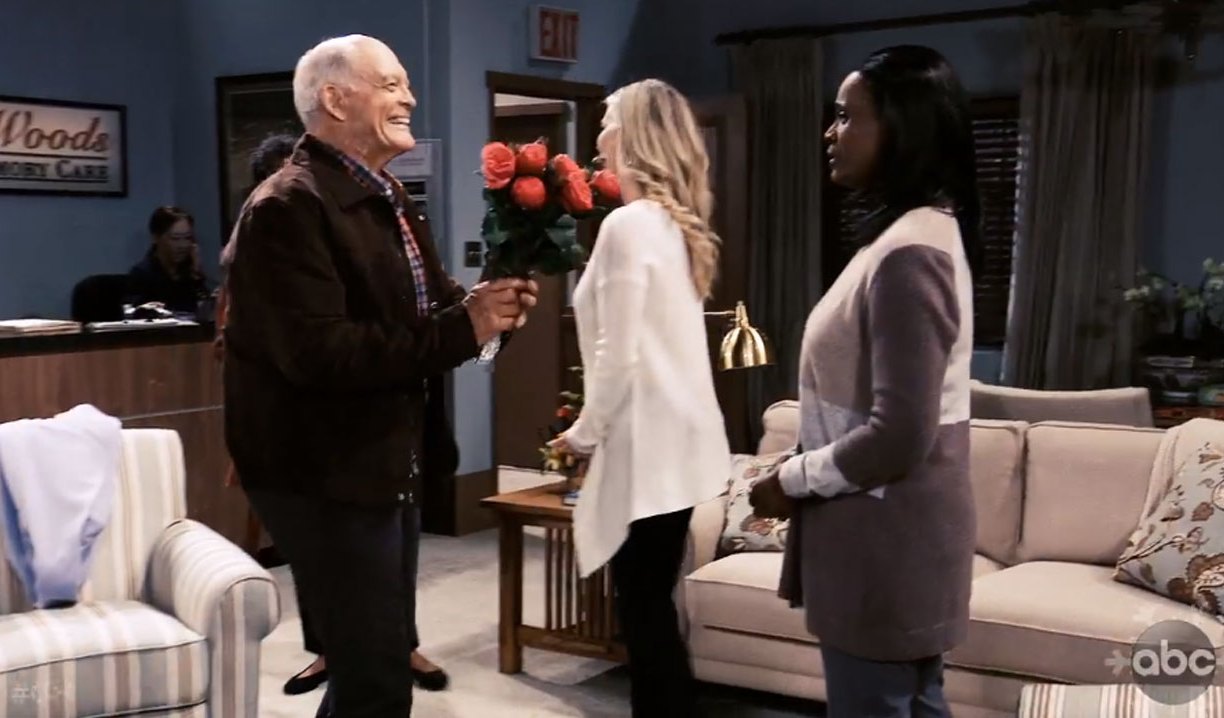 Things are really heating up in Port Charles as we get into February Sweeps, with drama and revelations happening every day it seems. Ryan’s growing creepier, Kristina is getting sucked down the rabbit hole into the town’s new cult, and the bizarre blindness story is even getting interesting.

The time finally came where Mike’s condition had just deteriorated too much and Sonny was forced to send him to Turning Woods to live full time. My heart breaks for Sonny, Mike, but also us as viewers. Max Gail has been a joy to watch in this storyline, and I’m torn over whether his role should end. It would be nice to check in on Mike from time to time, but also this send-off was in a way a perfect way to part with the character. Mike was happy and upbeat about going to move in with his gal Yvonne, and that may be the best way to end things, rather than watch him deteriorate further.

When @MaxGail came in and replaced Ron I was skeptical but he came in and from Day One I was his fan. Absolutely remarkable actor. He and @MauriceBenard are just impeccable together.I cried,smiled, cried some more through much of their scenes. One amazingly performed story #Gh pic.twitter.com/htSWi8Qd1Z

Lately, Ryan has gone from just being an insane killer to showing the criminal genius side of himself that has been lacking, and he’s become downright creepy. As I totally predicted in last week’s Deconstructing GH, Lulu can’t recall the attack, and he’s using that to his advantage to try and get out of town. First though he had to deal with Kevin, who had also gone blind. The way he treated, taunted and talked to Kevin was sinister, and Jon Lindstrom’s work has been Emmy worthy for sure. When Kevin told him about the prenup I was cheering because it seemed obvious he was trying to trip his brother up with Laura. It is long overdue that someone starts to realize Kevin isn’t Kevin. The fact that nobody in Ferncliff is questioning Kevin’s twin being there is even more ridiculous.

Kevin informed Ryan, who told Anna, Robert and Finn, that the mysterious Dr. Cabot was interested in researching identical twins. Anna realized he had met with her sister Alex in the past, which begs the question, is Alex wandering around somewhere on her own blind? And seeing Drew and Jason are the only other twins on the show, will they go blind? It really appears that the show is about to play out the fan theory that Anna, Alex, Ryan, Kevin and Drew were patients #1 – 5, and Jason was, of course, patient #6 when he came to in the Russian clinic. If this is the case, I’m excited about where this could go. There are a number of Anna fans who have held onto the theory that her memories of seducing Faison and having Peter weren’t hers, but were mapped into her and are Alex’s. Though explaining Valentin’s involvement will require more trickery from Alex. We also still haven’t been given a full explanation as to where Ryan has actually been all this time, only that Kevin found him at some point and committed him.

#GH. God PLEASE let Peter be Alex’s and NOT Anna’s. The image of Anna sleeping with Faison is sickening…

Soaps generally don’t let couples be happy for long, but Sam dumped Jason before their bed was cold! Of course, they aren’t really broken up, only putting on that front so she can get close to Shiloh. This Shiloh story had potential and still does depending on where it’s taken, but frankly, I’m over the creepy cult right now. Kristina becoming his right-hand man, and her grilling Alexis during another round of self-help therapy with Shiloh angered me. Alexis is a smart woman, and for her to be taken in by this cult and their games, deciding she and Julian need more closure, annoyed me. I’m not against a Julexis reunion, but I don’t like that they have reduced her again to being manipulated by others.

The Julian, Drew and Kim triangle is doing nothing for me because I just don’t see any sparks between Drew and Kim. Julian and Kim, on the other hand, have been great together, and it was about time Julian told her he didn’t cheat and they worked things out. Meanwhile, Carly pushing Drew to see where things could go with Kim was hysterical. He knew exactly what game she was playing, trying to protect Jason and Sam, and called her out on it. Seriously, did she forget he has Jason’s memories still and knows her tricks?

Just when Jordan and her team couldn’t get any worse, they now suspect Franco is the killer based on the producer’s note to speak to him, and well, Franco’s past. Then she tipped Ryan off to their theory, which has his wheels spinning. Lemme guess, Franco conveniently will have no alibis for any of the murders? At this point, Franco and Liz are never going to make it to the altar!

These are simply my opinions on this week’s shows. Agree or disagree, please leave your own thoughts in the comments.