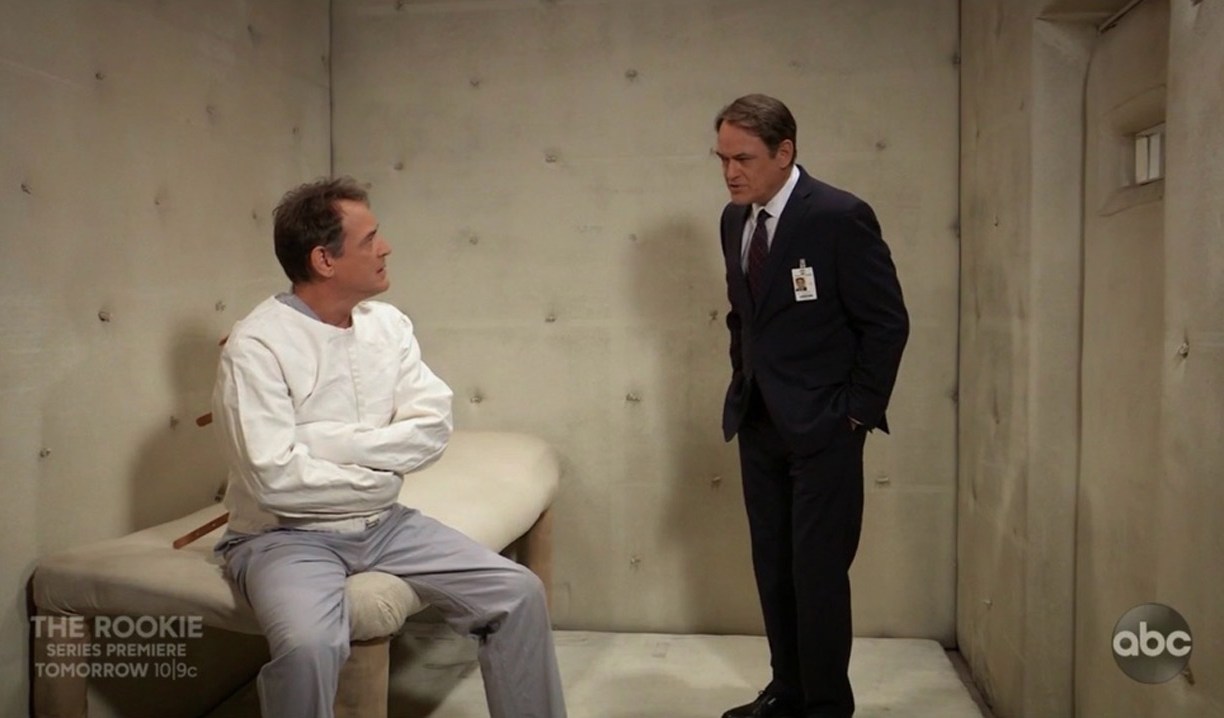 It was another short week on General Hospital due to the holidays, but one filled with some twists and a touching tribute to a vet we lost last year.

Several viewers commented on last week’s Deconstructing GH that Ryan’s ability to murder without leaving evidence behind is getting old. Others have voiced similar thoughts in our daily recaps, and on Soaps.com’s GH message board they have joked that he must have a cloak of invisibility to allow him to drop bodies off at places like The Metro Court and The Haunted Star without being seen. Admittedly I was baffled as to why Ryan put on the rubber gloves to go in and clean up his latest murder scene after he had already been all over it without them. With all that blood, how did he stay spotless and manage to clean up every print or spec of his DNA? While annoying, it’s not much different than all the other laws of reality one must suspend while watching a soap. However, when these pile up so quickly, as with this story, it starts to stick out like a sore thumb.

Others are annoyed that Ryan’s dropped his obsession with Felicia so quickly after 25 years. I don’t think he has, and his rage toward her while watching the documentary showed that. She still triggers him. I’ll admit when this story began, I had hoped we’d be seeing more of Felicia and Mac than we have. I only hope there is still time for that, as the story likely won’t play out until the end of February sweeps. Heck, knowing these writers, they’ll drag it into the Nurses’ Ball in May just to make that the main event! Thankfully Lulu tipped Ava off to “Kevin’s” past breakdowns, and Laura has also warned her there is something wrong with “Kevin.” It is looking like Ava may figure out who he is and bring him down, which would be a nice way for her to get justice for Kiki.

Ryan must be Spider-Man! Able to place dead bodies unnoticed on an outdoor terrace! #GH pic.twitter.com/Cm3kGLuzGA

Monica and Bobbie were involved in taking down Ryan in 1993. would be great if the writers would remember or even care. @MichelleAltman1 @valentinifrank @GeneralHospital #GH @JackieZeman Hopefully the spoilers are true that Felicia, Mac, Lucy and Scott will be more involved soon pic.twitter.com/bl6cP9nA0C

The Dawn of Day

A few weeks back I joked that Drew’s forgotten past could be tied to the new cult in town, and maybe he was even the founder. Well, now we’ve got Hank showing up, claiming to be Drew’s old friend from Afghanistan, who is also the leader of the cult and going by the name Shilo. Hank, Shiloh, or whoever he is obviously was the one contacting Sam about her past, that hint was made clear in his remark to Sam about changing his name to leave his past behind. None of this can be a coincidence, and I also am not discounting that Hank could be involved in the whole memory swap business with Jason and Drew. Likewise I still think  Drew may have played a pivotal role in this movement somehow.  Maybe Hank sold Drew out to Helena and Faison in order to fund the cult?

Carly’s busybody daughter Joss really is like her mom and got what she wanted. Julian dumped Kim after seeing her kiss Drew on New Year’s Eve, and encouraged her to be with him and Oscar who need her now. As I said in my thoughts last week, it was obvious the show would force Kim and Drew together, and eventually Julian will find his way back to Alexis. At least Julian and Alexis have chemistry. However, I really liked Julian with Kim, so it’s a shame they had to be blown up for Oscar and Drew.

A tribute to Susan Brown

Scott and Monica remembering Scott’s step-mother  Gail, played by the late Susan Brown, was touching. The mention of Tracy being the one who gave her the most heartache was a nice bit of humor to diffuse a sad situation. I just wish they didn’t use the same episode to hock Lucy’s Travel Guide to Port Charles. Couldn’t they have waited for that until another time? It should have just been about Gail.

Hold the phone, Jordan did her job!

I almost fell out of my chair on Friday when Jordan connected the fact that all the current killer’s victims were missing their driver’s licenses to evidence in the old case files that Ryan Chamberlain’s victims were as well, something the cops apparently never realized. Clearly the PCPD has a record of being inept. But I couldn’t believe Jordan figured out something for once. It’s doubtful that they’ll suspect Ryan is alive, that would just be too brilliant on their part. They better work fast though, because Ryan looked ready to kill Laura by the end of the week after she vowed to make reforming Ferncliff a priority.

These are only my thoughts. Please leave your own in the comments. And may 2019 bring happiness to all, and great GH moments!