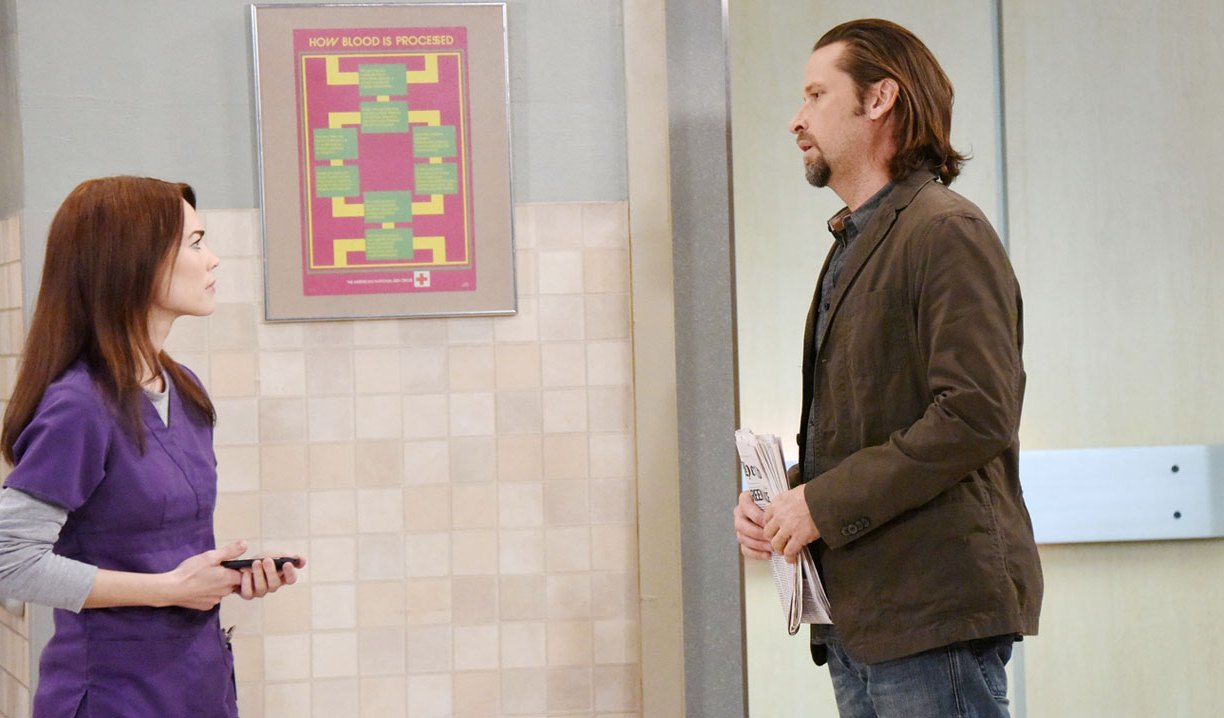 It was an unhappy week in Port Charles, as Morgan’s funeral led to a startling revelation from Sonny, and both Liz and Alexis found themselves in dark places. Many viewers aren’t thrilled with seeing the strong women on the show being torn down. Hopefully with it being Thanksgiving next week we will have a little more happiness and love on our screens.

Sonny tries to do a good thing but fails.
Sonny attempted to set things right by confessing to his part in Morgan’s death, which landed him in jail. Of course Jason informed him too late that his hit was called off and someone else was after Julian. Sonny may not be responsible for the bomb, but he admitted to putting a hit out on Julian. I was glad that Carly let Sonny know the new turn of events didn’t absolve him, as he still refused to walk away from violence as she had begged him to. Good for Carly for standing her ground! However by the end of the week, Carly found herself back in Jax’s arms and embraced in a kiss. Oh brother! Hopefully this is just her grief and she’s not thinking clearly.

Liz’s past comes back to haunt the present.
Tom Baker, the monster who raped a fifteen year old Elizabeth, is back in Port Charles and turning things upside down. In last week’s Deconstructing “GH” I had noted that it seemed like the only reason they were dredging up this old story was to prop Franco up as a hero in Liz’s eyes. However many viewers are furious that they are using a rape storyline, given Franco’s past with Sam and Michael. I agree, they could have found another way to do this. Honestly, he and Liz were getting along great, I don’t see why this drama was needed period.

The normalization of violence against women on #GH whether it be Julian/Alexis, Tom/Liz or Franco/Sam is disgusting.

To make things worse, Alexis got blackout drunk with Baker and she came dangerously close to making a big mistake with him. Again, many viewers are fuming over watching the once strong Alexis being reduced to a pitiful drunk. She deserves a better storyline than this. Hopefully this will be her wakeup call.

Why is Alexis flirting with Tom?? She was at his trial and adamantly wanted him put away for raping Liz and hurting Emily. #GH pic.twitter.com/JtKZm459Df

An interesting development may be just what Julexis fans need right now.
On Friday’s episode we found out that Oscar Jessup, the man who may be responsible for bombing Julian’s car, has been dead since 1990. We also learned that a mysterious man in red, calling himself Jessup, has been pulling Julian’s strings for months now. This could explain all of Julian’s puzzling behaviors, and may be just what Julexis fans have waiting for. This was a great cliff-hanger and unforeseen twist. Who is this man?

The plot thickens with Valentin!
As annoying as the whole Claudette plot and “who is and isn’t Charlotte’s dad” storyline has been, the mystery surrounding Valentin is still one of the best stories on the show. Friday he stunned Anna by speaking a Latin phrase to her, which is clearly something Anna has heard before. This along with that photo of someone who looks like Anna seem to indicate he has a definite connection her.

Let’s hear it for the vets!
It is always great to see the vets being used, and this week they were out in full force. Lucy figuring out exactly what Scott was up to before he could even begin to woo her was great. Why then can’t she figure out Ava had Morgan’s pills for another reason? She needs to tell someone and soon so they can reveal what Ava really did.

Seeing Kevin and Laura back together was equally great as well. Kevin shocking Laura with the news that she does indeed snore was funny, but just so cute. However the two may have a new case on their hands, what with Valentin cryptically telling Laura that they would always be related. What does that mean? Some have an idea:

@BlueWizard75 that Charlotte is Lulu's daughter

I too have pondered whether Charlotte is Lulu’s kid, though others point out the age/timeline doesn’t work. Well, age never makes sense on soaps anyways. We’ve also been told the embryo wasn’t viable, but maybe a desperate Helena brought in Valentin to use his DNA to repair the embryo. Hey, it isn’t as far fetched as it sounds, scientists have been starting to do this. Charlotte may have two daddies and a mommy, and Claudette may have just been the surrogate.

Deconstructing GH: A Thanksgiving on...