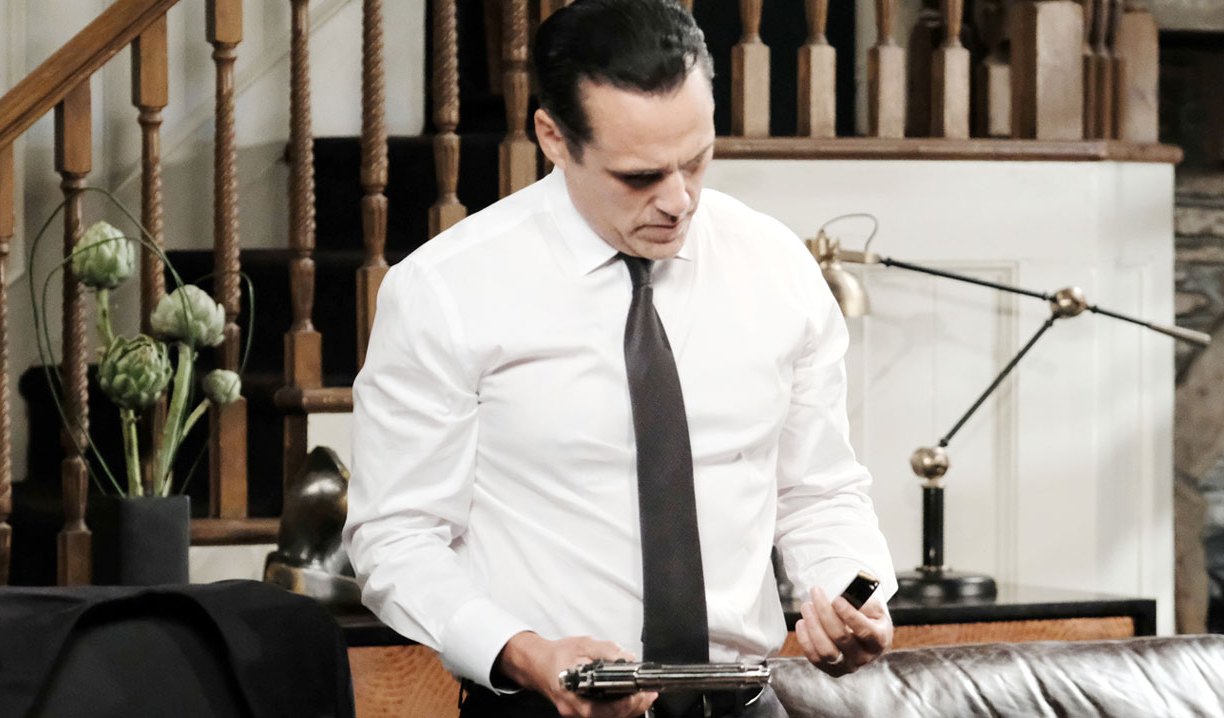 It was a dizzying week what with Andre and Curtis once again fighting over Jordan, Franco wavering back and forth from hero to psycho, and Charlotte’s parentage changing for a third time. Some storylines have gone on too long and are leaving a bad taste in viewer’s mouths, but Morgan’s funeral provided a great cliffhanger

The merry-go-round of Curtis, Jordan and Andre.
Curtis and Jordan had their fieriest confrontation yet over Curtis stealing police evidence. Fortunately, Jordan let it slide, only because she didn’t want to ruin Valerie’s career over it. However, Curtis’ dreams of being a cop again are toast. Hopefully this is the last time we’ll have to hear this rehashed fight between the two of them, as it’s been argued to death. Jordan and Curtis also just need to rip one another’s clothes off and get it on, as it’s so obvious that’s where this storyline is heading. Of course before they could get there on Monday, Andre interrupted. As great of an actor his portrayer is, Andre has become a fairly useless character since he started denying his love for Anna and has been forcing himself to be with Jordan.

Will Franco be the hero, or just cause more problems?
Just as Friz fans thought Franco and Liz might actually consummate their relationship, a call from Pentonville with the news that Liz’s rapist was to be paroled ruined the moment. Franco backed off, realizing his own history and what he did to Sam is just as horrible as what Tom Baker did to Liz. Now he’s vowed to protect Liz no matter what. Frankly, I’m not sure why they are bringing this old storyline back in to play. Part of it seems to try and paint Franco a hero, at least in Liz’s eyes. However Franco once against started losing it over Liz talking about Jason making her feel safe, and it seems the only thing Franco will do is screw himself in Liz’s eyes.

This week’s DNA results are in.
Hopefully this latest round of “who is Charlotte’s daddy DNA tests” have put the question to rest, as it seems indeed Valentin is her father. This is something most fans guessed from the minute Claudette mentioned Valentin, so having to endure three weeks of different daddies was just a waste of time.

Oh wow. Griffin is not the father. WHO COULD HAVE SEEN THIS COMING??? Everyone. Everyone saw this coming. #GH

However, as I said in last week’s Deconstructing “GH,” Valentin Cassadine shines on GH, and I’m not alone in thinking this.

I totally agree about Valentin. @japastu has been a great addition. He has chemistry with everyone. https://t.co/FLEa1JiNvx

Aside from being Charlotte’s father, he dropped another bomb that Mikkos changed his will and left everything to his eldest living son, which means Valentin. Laura rightly questioned as to why he needed to kill Nikolas, let alone force him to sign a document turning everything over to Valentin. I can’t help but wonder if a very much alive Nikolas and Valentin are in on some secret plan together that we the viewers won’t even see coming.

Meanwhile, as much as Nina has tried to resist the sexy Cassadine’s charms, the minute she learned he was Charlotte’s daddy she might as well have jumped into his arms. She’s so desperate to get her hands on that little girl that she’ll likely take back up with Valentin.

Related: Where are they now? Emily Wilson co-hosts The Hero Effect

Lucy the blackmailer.
Viewers finally learned that Lucy is the one who caught Ava dumping Morgan’s meds, but instead of telling Sonny and Carly, she’s holding onto the info to use it to her own advantage. What could have been a great storyline was a bit of a letdown with this reveal, mainly because Lucy doesn’t realize what Ava actually did, she only assumes Ava was sleeping with Morgan again. This was definitely the biggest “smack your head” moment of the week. A twist in the Finn and Hayden story isn’t twisty enough.
Last week I commented that Finn’s mystery illness storyline had gone on far too long. Now we have Hayden accidently infecting herself with the same illness, putting her life in jeopardy. One can only hope this means Finn will find that cure stat, as this storyline needed to be over yesterday. This may also be what brings Hayden and Liz together as sisters, and who knows, maybe we will get a visit from Jeff Webber himself?

Who tried to kill Julian?
Many viewers have felt Sonny wasn’t responsible for Morgan’s death, and Jason and Curtis both are separately onto this. Someone else planted the bomb in Julian’s car, and it is starting to look like it was Julian himself. I think most of us guessed that too, but it’s nice to see Julian possibly getting something coming to him.

Morgan’s funeral leaves us hanging, and Nelle is still a mystery.
Morgan’s funeral was incredibly touching, and once again the entire cast did an outstanding job. Nelle continues to remain a mystery, and before the funeral mumbled to herself that Carly’s life was about to become much more hellish. What was that about? Then there is Jax, who is back and trying to find out what Nelle remembers about her surgery. He’s definitely involved, but the real question viewers want answered is who is Nelle really. I asked this on Twitter and most think she’s probably Jerry Jacks’ kid. It wouldn’t surprise me, as she seems just as twisted as him.

Whose long lost kid do you think Nelle really is? #GH #GeneralHospital Feel free to comment and choose someone not listed!

Of course the major moment of the week was Sonny having a complete meltdown next to Morgan’s coffin, pulling out his gun, and planning to kill himself so that Morgan could be at peace. We all know Sonny won’t die, but how will they stop him? We have to wait till Monday to find out.