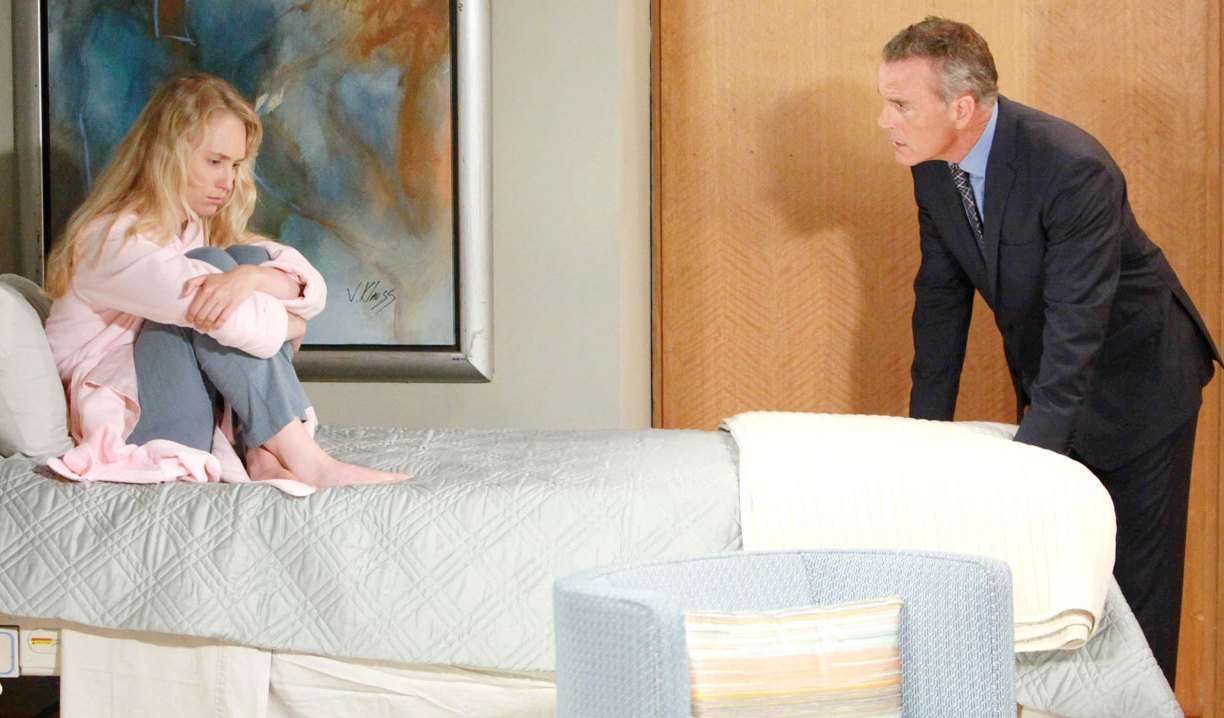 A lot was going on in Port Charles this week, what with Tracy figuring out the truth about Paul, Anna back and on his tail too, and the DNA results coming in on Claudette’s daughter. Still, some storylines were a drag, namely the Kiki and Morgan drama.

The walls are closing in on Paul.
In last week’s Deconstructing GH I noted how Sabrina’s death caused Paul to begin cracking up. This week Paul continued to spiral out of control, but viewers got a payoff as his motives were finally explained. Bravo to the writers to linking many things back to Sloane’s rape of his daughter Susan, which sent her into a dark place and forced Paul to have her committed. I honestly had forgotten about the rape, and wondered if it was even true when Paul first told Anna about it. Apparently everyone he lured to GH to kill had a hand in what happened to Susan, from botched evidence handling to supplying Susan with drugs. Well almost everyone! It seems they forgot he also targeted Bobbie Spencer, and she never factored in the explanation he told Tracy. I think they are just going to conveniently forget about her, just like they forgot Paul shot Sonny.

Jordan has got to be the stupidest commissioner I have ever seen. Anna needs to get her job back like asap #GeneralHospital

Fortunately Anna returned and she put all the pieces together to realize Paul was the killer. Many took to Twitter to crack jokes about how quickly she figured it all out while Jordan and the PCPD fell down on the job. I concur with many that it’s time for Anna to be made commissioner again.

Watching Paul lose it has been entertaining, as Richard Burgi is such a phenomenal actor, but this looks like this his swan song on “GH.” On a soap where mobsters go free left and right for murder, it’s hard to see them letting Paul go after he targeted not one, but two Quartermaine women. Paul is a sick kind of crazy that needs to be punished, and he’s gotten away with so much for too long. Friday’s standoff between him and Tracy was great, and Dillon and Anna arriving just in time was a fantastic cliffhanger. I can’t wait to see how this all plays out.

Where does Julexis go from here? And is Carson next?
In spite of all that has happened, Julexis still have their fans, and they are pissed at what the show has done to their couple. Predictably we now have Alexis falling completely apart and becoming a full blown alcoholic, which I’ve previously bemoaned and others have echoed my sentiments. Many viewers hate seeing Alexis being portrayed as so weak as they feel it’s out of character for her. Sam facing off with Julian on Friday to try and convince him to leave town did no good, as he’s so deluded and thinks he’s going to get his family back. Then there is Sonny who is so bent on revenge that he won’t listen to anyone that it could cost him his marriage to Carly. The show’s destroyed one popular couple, would they dare destroy a second?

#GH is trashing #Julexis like nobody cares about the couple, like they're Morgan/Kiki. Meanwhile, the latter are still a thing. ?

One viewer on Twitter had me chuckling with her assessment of the Julexis situation, as it baffles me too as to why the show has decided to destroy one of its most popular couples, while at the same time forcing us to endure Kiki and Morgan. Now we have Morgan cheating on his college term paper as an actual storyline. Is this a joke? That’s something that belongs on a Nickelodeon teen drama, not “GH.”

News: All My Children and One Life to Live creator Agnes Nixon dead at 93 Sisters by blood only.
I guess it was too much to hope for that Liz and Hayden could find a way to patch things up and try to be sisters. It was nice to see Liz extend the olive branch, but Hayden is clearly too burned and hurt to accept it right now. I am a fan of Hayden, but even I thought Liz’s speech to her sister about getting a job instead of some man to fix her problems was great. Finn has told her as much too, but it just doesn’t seem to be clicking for her. Hayden wants the easy way out as that is all she’s known.

A who’s the daddy storyline that nobody cares about.

@BlueWizard75 When will this Claudette story end?

This tweet from a reader perfectly sums up how I, and probably many viewers, have felt about the Claudette/Nathan/Griffin/Maxie storyline. So far every part of this long, drawn-out story has been so utterly predictable and a snooze. The only perk has been some shirtless scenes of Nathan and Griffin every now and then, but even they can’t make up for this mess. Thursday’s reveal that Valentin Cassadine is the man that Claudette is running from actually made me perk up a little and think perhaps this story may get interesting now, but that remains to be seen.

@BlueWizard75 Valentin after Claudette?? He'll be interested to know Nathan is believed to be a Cassidine… The plot thickens!!!!!

Here is hoping that this story does bring back the long lost question as to Nathan’s parentage, as that is a who’s the daddy storyline many fans have wanted an answer too!

Deconstructing GH: Some viewers are...