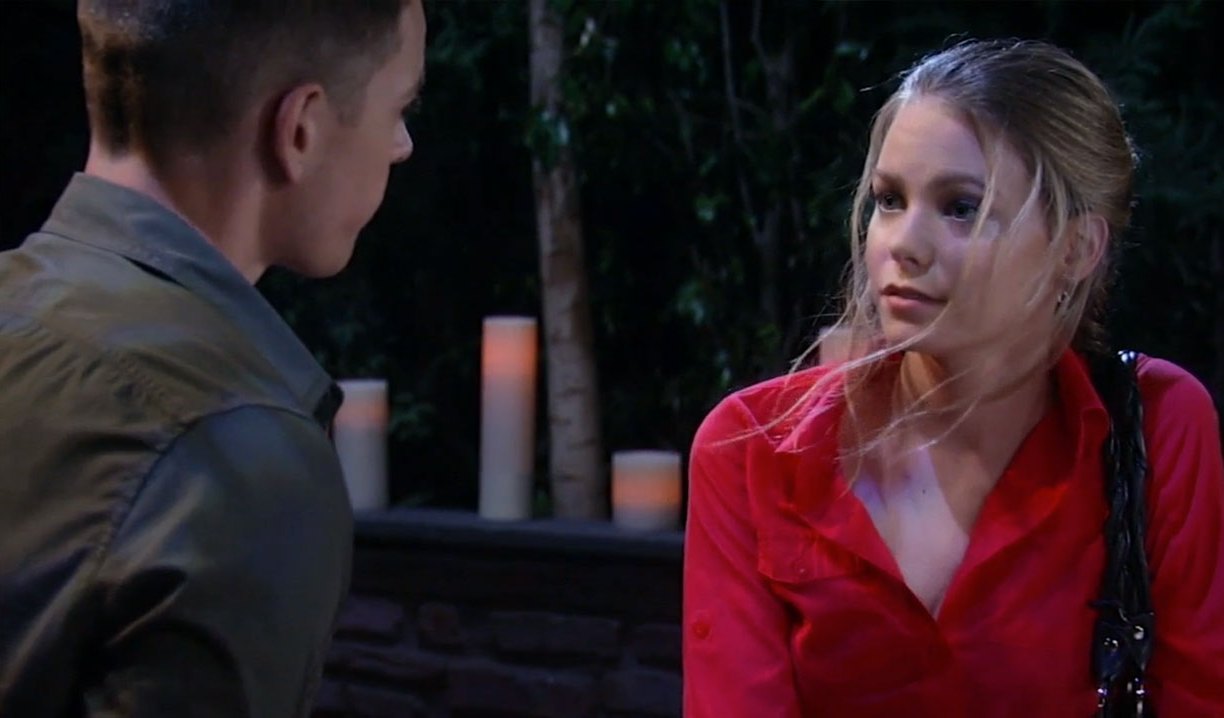 The problems of having such a large cast were on display, as the show tried to highlight many of the characters, which ended up in a bit of a jumbled mess. Tracy lecturing Dillon over the STI issue, Joe and Sabrina bumping into one another and going to dinner, and Jordan and Andre’s fifth time making up were good examples. Were any of these scenes really necessary?

Happy news, troubling news.
Finn revealed to Sam that she is pregnant, but hot off the heels of this big news came the unsettling news that Jason seems to have contracted Malaria while in Greece. Sam’s child could possibly be in danger because of this. My guess is that Jason doesn’t have Malaria, but instead the same mystery disease that Finn has.

Ava killed it, no pun intended.
Since getting close to Nikolas on Cassadine Island, I’ve found Ava not only pleasant, but I actually have felt some sympathy for her. Her lecture to Kiki about Morgan was spot on. Not only is Kiki a crutch for him, but she knows deep down that she doesn’t belong with him. I was also pleasantly surprised that she turned on Julian and his request to help bust him out. It would appear their roles have reversed, with Ava now going straight and staying away from the family business. By the end of the week her heartfelt moment with Laura also made me realize how much I like this Ava. Joe lands a job at GH.

Another new character is introduced.
Many fans have been irked by the barrage of new characters being brought in, many who have no ties to current families or storylines. To be fair, they do have to introduce some new blood, only because watching characters date their ex’s for the third or fourth time gets old. Nelle appeared this week as Joss’ possible donor, and immediately clicked with Michael. Thank the lord, as Michael and Sabrina have been so stale. It seems someone on the writing staff realized this too, and they are throwing Sabrina together with Carlos’ twin brother Joe. I asked viewers what they thought about Michael and Nelle, and it seems most have given them the thumbs up.

#GH fans, are you for Michael and Sabrina, or has Michael and Nelle grabbed your interest? Vote!

I like Nelle and saw some chemistry with Michael. Never thought he & Sabrina had any chemistry at all https://t.co/qEnzKSoR6H

As I pondered in last week’s soapbox, it definitely seems Jax is behind arranging for the transplant, especially given how bad he wanted Nelle gone. Could Nelle be related to someone close to him or Joss? A child given up that made her a perfect match and Jax knew about?

Remember when… Georgie Jones was murdered by the Text Message Killer

Friz fans continue to feel the chill.
Franco continued to give Liz the cold shoulder, and got another blow when Monica suspended him from his job.

@BlueWizard75 I love Friz and hope they get together somehow.

Even though Franco has been distant, Liz still stood up for him against Jason, who as usual tried to dictate Liz’s life and who she can and can’t see. While he has a right to know what is going on because of Jake, and he has a right to be angry at Liz still for her keeping his identity a secret for so long, he has no right to keep dictating what she does. I loved watching Liz put him in his place and tell him to focus on his own life a bit more. I like Jason, but he can be very preachy.

Fortunately for Friz fans, by the end of the week Franco learned that it was Liz who saved him. Watching Franco continuously push her away was frustrating, and hopefully he will apologize to her and make things right.

Valentin and Nina are scorching hot.
As popular as Nina and Franco were among some fans, I have to say there is amazing chemistry between her and Valentin. Even though he’s insane, when they are on screen together I think, “Franco who?”

A welcomed resolution.
The show made great use of the vets again this week. Ava walking in on Scott and Lucy was hilarious, but I groaned when Lucy ran off at the mention of Kevin being shot. Fortunately the show didn’t go there and revisit the Kevin-Scott-Lucy triangle as I feared. Lucy and Kevin put their animosity behind them and moved forward as friends.

Julexis fans still can’t catch a break.
The dream sequence of Alexis forgiving Julian was so obvious that I don’t know why the writers felt the need to put it in there. Julian had a chance to do something for Alexis and testify at her bar hearing, but he demanded she testify and lie for him so he could go free. It’s hard to keep hope for these two when the show keeps sending Julian down this dark path.

A letter from Greece.
It was good to see that Lulu isn’t dropping looking into Daphne and what her connection is to her and Helena’s will. I’m putting my money on Daphne having carried Stavros and Lulu’s embryo and is secretly raising the kid on the island. We still need resolution to Laura’s mystery, and what happened to Jake on that island. These are the stories that should be front and center right now, not some of the fluff we had to endure this week.

This is an opinion piece. Please leave your own in the comments, whether you agree or disagree with mine.