Just like the plane, the action on General Hospital stalled 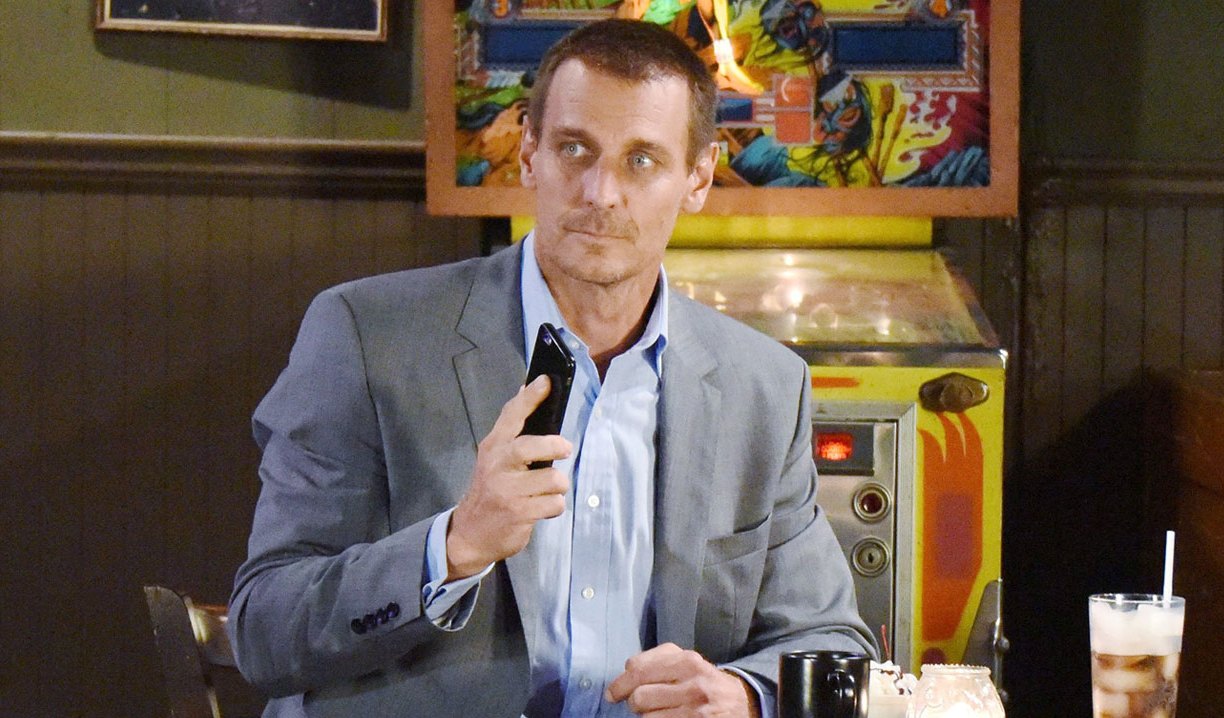 After a few action packed weeks, this one seemed a bit slow. The gang from Greece made it home, and we were left with more questions than answers as we said goodbye to Cassadine Island again. Most of the action this week surrounded Valentin’s appearance and whatever Claudette is up to, which is anyone’s guess at this point.

Jax is back!
The highlight of the week had to have been the return of Ingo Rademacher as Jasper Jacks. However, many Carly and Sonny fans panicked as they thought it could mean problems for their favorite couple. Given that Rademacher announced he’s already done at General Hospital, I think we can safely assume he won’t be a threat to the duo. Jax definitely seems to be involved in Joss’ transplant though, as he seems determined to keep Carly from digging into it.

The action in Greece came to a halt, just like the plane.
The engine on the plane wasn’t the only thing that stalled in the Mediterranean, as this storyline just seemed to be time filler. The only exceptional moment was when Lulu had to inform her mother that Luke may be dead. As always, Genie Francis (Laura) knocked it out of the park in that scene expressing her grief over losing Luke right after having lost her son.

My kingdom for a horse!
Valentin arrived in Port Charles to deal with Spencer, though found a few hours to get hot and heavy with Nina. Poor Nina’s luck in the men department isn’t improving with that choice, but man Valentin is nice to look at. He then quickly took off to try and take off with Spencer, only to be thwarted by Sonny. By Friday, Valentin had been apprehended, making me wonder where this storyline and character are going. It would be too easy for them to just lock him up and be done with him. Outside of wanting the Cassadine fortune though, we have no clues to go on as to what else he’s up to.

Closing in on the killer.
Franco was held on suspicion of being the hospital serial killer, though as I suspected in last week’s soapbox, Franco being the hospital killer was another red herring. Thankfully this is one plot the show didn’t drag out, as Liz quickly pieced together the clues of the timeline of the latest killing and provided Franco with an alibi. It’s pretty pathetic when it takes the hospital nurse to do the PCPD’s job for them! Not only did she realize Franco couldn’t have turned off the monitors in Mrs. Prescott’s room, but she basically shot holes in Amy’s statements about them and provided Valerie and Nathan with possible evidence that Amy is the killer. Many fans on Twitter also agree that Amy is likely the killer.

@BlueWizard75 it could b amy, she seems 2 b around 4 every killing, and she doesnt like franco – would frame him, plus she's dispensable

@BlueWizard75 Let Krissy find someone her own age. Too many red herrings with Parker. Killer is Amy the nurse. That's my two cents.

@BlueWizard75 Is it just me or does it feel like Nurse Amy is the GH hospital killer?? Awfully shifty and quick to accuse Franco…

The question now is, how long will it take them to nail her, or is this yet another red herring? Even though Franco was freed thanks to Liz’s work, he felt she didn’t want anything to do to with him in a crushing blow to Friz fans. I felt so bad for Franco when he told Liz he wasn’t going to bother her or Jake anymore. He was like a sad little dog who never gets picked at the animal shelter.

@BlueWizard75 because I'm huddled in a corner after today's episode!?

Is this a soap or health class?
The nonsense with Morgan, Kiki and Dillon reached new lows this week when Darby learned she had an STI, had to inform Dillon and Morgan. Of course Kiki had to be pulled in because she has slept with Morgan. The entire storyline was one big educational segment on the dangers of a new STI called Mycoplasma genitalium. While it was actually a nice change to see a soap promoting safe sex practices, the whole thing just didn’t work. As if it was bad enough, we also had to deal with Morgan seeming to have another one of his episodes and decide he and Kiki should move in together. Run Kiki, run! What is Claudette up to?

Claudette’s cruel Intentions.
For a few weeks now Claudette seemed to have been scheming to get back into Detective Sexy Pants’, aka Nathan’s, pants! Now comes the curveball that the man she truly loved was Griffin, who claims Claudette professed to never care about Nathan. What is this woman up to? I can’t even fathom what her end game is at this point.

Something is wrong with Sam.
Sam once again fainted, which she’s been doing a lot of lately. Is she pregnant? I’m thinking it’s going to be something worse, and good ole Julian will be the only one who can somehow save her life with a transplant. Yeah, been there done that, but how else is Julian going to worm his way out of a prison sentence?

Between Valentin and the mysterious...

A barrage of stories and too many...