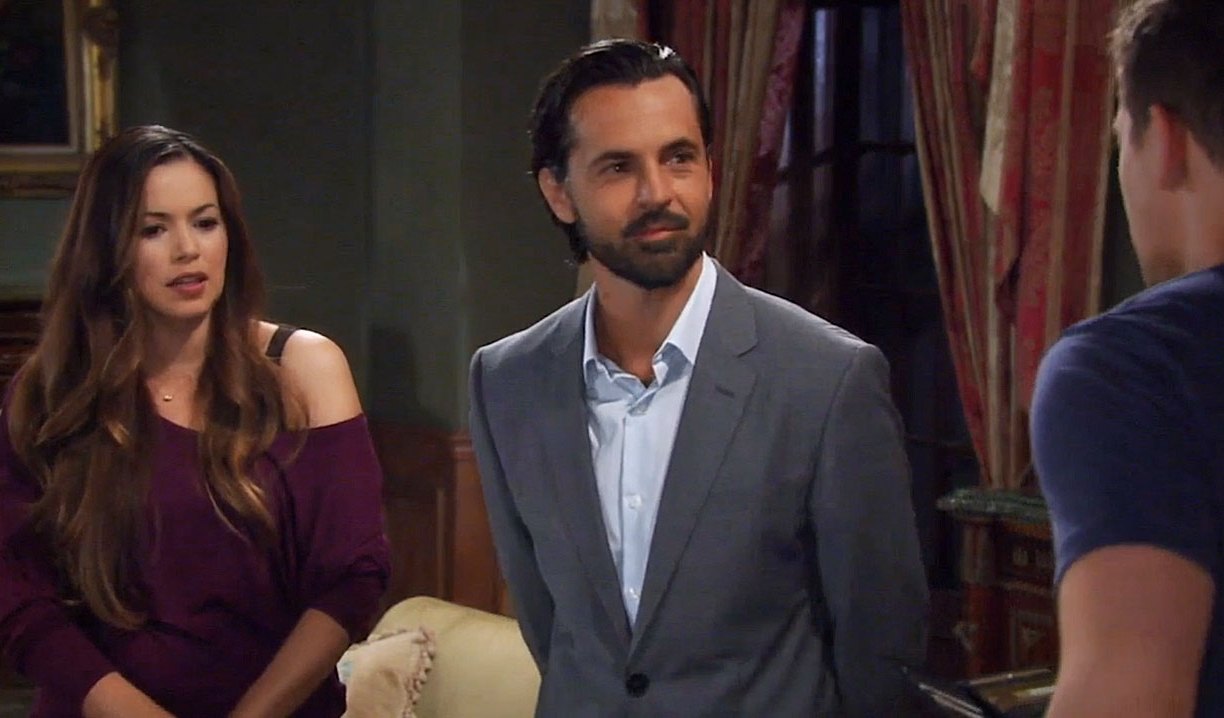 The action on Cassadine Island in Greece remained fast and furious, but back in Port Charles things were a bit slow, save for a few surprises.

Finn a junkie?
In last week’s soapbox I discussed how watching Finn relapse from the lack of medication was getting stale. Now we learn that Finn’s mysterious disease may actually be a more common aliment, and that is he is an addict. If it turns out that he’s nothing more than a junkie then I for one will be disappointed. He swore to Hayden that he wasn’t, and that he’d never lie to her, which brought a smile to her face. These two are adorable together!

Sister, sister!
Hearing the name Heather Webber landed Naomi in the hospital after a panic attack. Upon learning Jeff Webber is Liz’s father, she had another. Naomi later begged her daughter to try and get along with Liz. Yes, it looks like not only did Heather get her money from Raymond, it may have been to keep the secret that Jeff is Hayden’s father. This was a great little surprise. Hayden and Liz are great enemies, so the reveal that they may be sisters will probably have them both running for the bathroom to be sick.

The worst of the week.
Michael and Sabrina, Darby and Dillon, and Kiki and Morgan were the pits this week. Darby is nothing but a distraction for Dillon, and Morgan has already started to unravel at the mere thought of Kiki not wanting him. When she suggested they take things slow and not jump into the sack, which they did anyways, he almost had a complete meltdown. Then there is Michael and Sabrina, who can be sweet at times, but currently are leaving a sour taste in my mouth. The only thing that made these two interesting was the arrival of Carlos’ never before spoken about twin brother Jose/Joe (played by Jeffrey Vincent Parise). The fact that Sabrina dated Joe before Carlos is going to make things interesting for Michael and Sabrina’s romance. It actually might be the nail in their coffin, which many fans probably wouldn’t cry too much over. Some fans have enjoyed the twin and sibling twists “GH” rolled out this week, while others found it too much.

I am happy not to be watching General anymore. Story lines are too much https://t.co/ebOfe4tlnO

The man with the name nobody can pronounce.
Theo revealed to his hostages on Cassadine Island that he was in fact Valentin, and then he, Nikolas and Kevin managed to all pronounce the name three different ways. Maybe the show should have agreed on a pronunciation ahead of time. Valentin is upset as he was raised in squalor and now wants the entire fortune for himself, and is willing to kill his hostages unless Nikolas signs it all over. A struggle and a gunshot led to poor Nikolas going over the balcony of the castle. Isn’t this the third time Nikolas has fallen from a building in just a few months? Anyways, why didn’t anyone point out to Valentin that the Cassadine fortune has been bled dry by Helena. All he’s gunna get are two old castles. Valentin’s story started off great, but I fear the hostage situation and shooting Kevin, while trying to take out Laura, has pigeonholed him as another short-term crazy Cassadine villain. Like Helena he could end up being someone the show will just bring out now and then for a little fun, rather than make a complete role out of his character. I was wondering if Valentin and Nikolas were in this whole thing together, but Friday’s episode disproved that when he shot at Laura. Genie Francis (Laura) was amazing as she tore Valentin a new one, and I can’t help but wonder who the skeleton Lulu stumbled upon in the catacombs is.

Related: Could Valentin Cassadine be the father of Nathan West?

Kristina and Parker hit the sheets.
This is a storyline many fans don’t seem to have taken to, but I enjoy her with Parker much more than Aaron. At least one other fan on Twitter is also enjoying the storyline!

@BlueWizard75 GH just got better with Ashley Jones returning and the Parker & Kristina storyline heating up.

@BlueWizard75 I'm praying GH knows what a talented actress Ashley is and how she brings out the best in Lexi. This storyline needs to stay!

I am looking forward to Kristina finally opening up to her father about her sexuality, and embracing whoever she truly is. Aaron is cute, but not the one for Kristina. No love for Julian.

The fall of Julian Jerome.
Julian was getting beaten down by everyone, and it was hard to feel sorry for him. In his most vulnerable moment, after Lucas and Olivia turned on him, Alexis dropped some divorce papers on his bed and walked out on him. That was truly a “you go girl” moment. Fortunately, she is not pregnant after all, which would have been a crummy and overused soap plot to keep these two connected. However I’m not counting them out just yet, as Alexis seemed to hesitate when she heard a delirious and drugged Julian professing his love for her.

These are simply my opinions on the show. Please leave your own in the comments!

Between Valentin and the mysterious...