Deconstructing GH: Jason’s reconnecting with his friends and family, and Laura’s recounting of the past struck a cord with fans 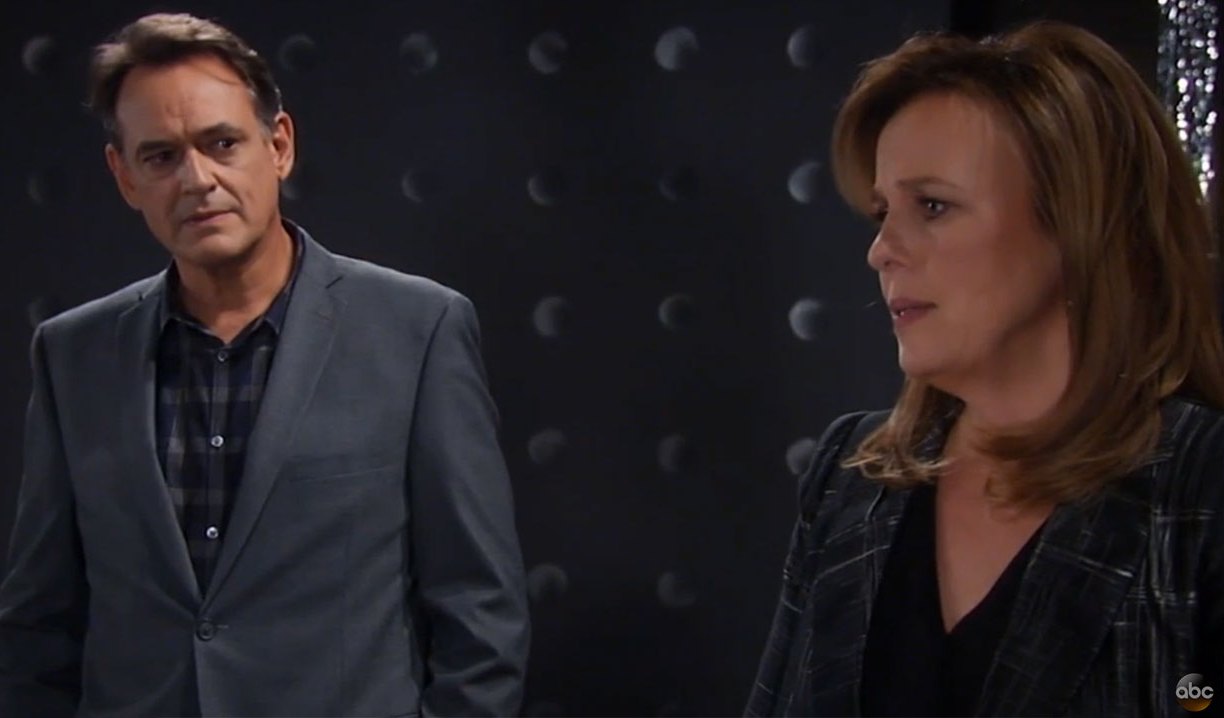 Revisiting the past was a central theme this week, as Laura remembered a pivotal moment in her life, and Jason began getting more of his memories back. However many are still reeling over what the show has done to Julian and Alexis.

Kevin and Laura could tear up the dance floor.
Kevin and Laura were finally given air time again this week as they sought to solve Helena’s riddle. Why the show isn’t making more use of them or this story boggles my mind, as they have been great together. Helena’s clue led them to the old Campus Disco, where Laura reflected back on Luke raping her, a story that was highly controversial in the day and still stings some fans. The writers gave Genie Francis some great material to work with this week as Laura refused to let the rape be a defining point in her life and relationship with Luke, or take away from their marriage and their children. With Luke gone, it’s time for Laura to move on, and she and Kevin would make a great couple. It also has the added bonus of getting Kevin more time on our screens.

Alexis picks a side, or does she?
I was so glad to see Alexis take Julian to task for killing Carlos with the same dagger that was used to take her mother’s life. I pointed out how sick that was in last week’s Deconstructing GH. However, I still don’t know what is going through her head. Perhaps it was simply the shock that made her continue to side with Julian, but thankfully she found her lost brains and refused to burn his shirt, the last piece of evidence of what he did. Probably a good choice, at this point I wouldn’t be surprised if Julian flipped on Alexis. With her prints all over that dagger it seems obvious she’s going to end up taking the blame for Carlos’ death.

Sonny turning on Alexis and letting her know she was dead to him was a really hard scene to watch. Alexis’ loyalty to Julian is destroying her life little by little, and it’s just heartbreaking to watch. This story really riled fans up and they took to Twitter to share their unhappiness about it, though some disagreed on how much of a victim Alexis is.

@soapoperafan @BlueWizard75 Alexis closed her eyes to the obvious for months. She is not trapped, she volunteered for this grief.

@BlueWizard75 @soapoperafan no, she didn't. She married him thinking he was out of the mob and was gonna stay out…..?

Sweet memories.
Fans finally got the scenes they were waiting patiently for as Jason, one by one, told his friends and family that his memories were returning. I was extremely glad to see him tell Sonny that while he was getting his memory back, he had no desire to pick up where he left off working with Sonny. I loved Sonny giving Jason his blessing to get out while he could and make a good life with his family. The one thing I would have liked more of was Jason connecting with Monica. I felt we were shortchanged there. I am happy that the show continues to at least make more use of Monica.

What do we know about Finn?
Finn is truly the biggest mystery in Port Charles right now, and as Obrecht pointed out, we know nothing about him. That looks like it’s about to change as she is out to prove he’s up to no good with his patients. Could Finn be a modern day Dr. Kevorkian? Is he killing his elderly patients, or is he experimenting on them which is leading to their deaths? Initially I thought Obrecht was killing them to frame Finn, but that doesn’t seem to be what is going on. I’m really enjoying this story because it’s putting “General Hospital” front and center again. It’s time for the mob to take a back seat for awhile.

Silly Franco, Trix are for kids!
Jake didn’t take the news that his mother and father were taking his lessons with Franco away, and he ran off. Thankfully Franco found him waiting at his place, and even better was that the show didn’t have Franco a culprit in his going missing. For a moment it seemed like they were going to go there again. I do hope Liz finally stands up to Jason and lets Franco help little Jake, because his character is magical when he interacts with kids, be they Jake or Kiki. The bell of the ball.

Hey Lucy!
Lucy Coe returned as The Nurses’ Ball is right around the corner. With Kevin back on our screens more, as well as Scotty, couldn’t the show find a better role for Lucy as well? It’s sad that they trot her out once a year at this point just for the ball. The current partnership between Kevin and Laura would be a great way to pull her back into the mix more.

A new triangle on the horizon.
It seems clear that Dillon has some interest in Kiki as more than just a friend, but it doesn’t seem she’s realized it since she’s so focused on Morgan. I hate to agree with Ava, but Morgan likely will end up hurting Kiki once again, though Ava is one to talk. Watching Morgan actually break things off with Kiki, again, was a heartbreaking scene though. Still, he is right, they just hurt one another. They both may be better off with others.

Sabrina and her baby finally turn up.
Sabrina and her child finally popped back up, having been hiding out in San Juan with one of Carlos and Sabrina’s childhood friends, who of course is involved in the Puerto Rican mob. Her aunt delivered her child to the Quartermaines, and broke the news about Carlos’ death to her. Her old friend Marcos was furious about this, as her still being missing is drawing the cops attention to him. This storyline is ridiculous and makes absolutely no sense at all. That she can’t be let go and Marcos wants to off her is just dumb. Michael’s taken off for San Juan to rescue her and I just hope this storyline doesn’t drag out any longer than it has. Michael and Sabrina are an adorable couple, but they both deserve a better storyline than this.

As always, these are just my opinions. Feel free to leave your own in the comments.