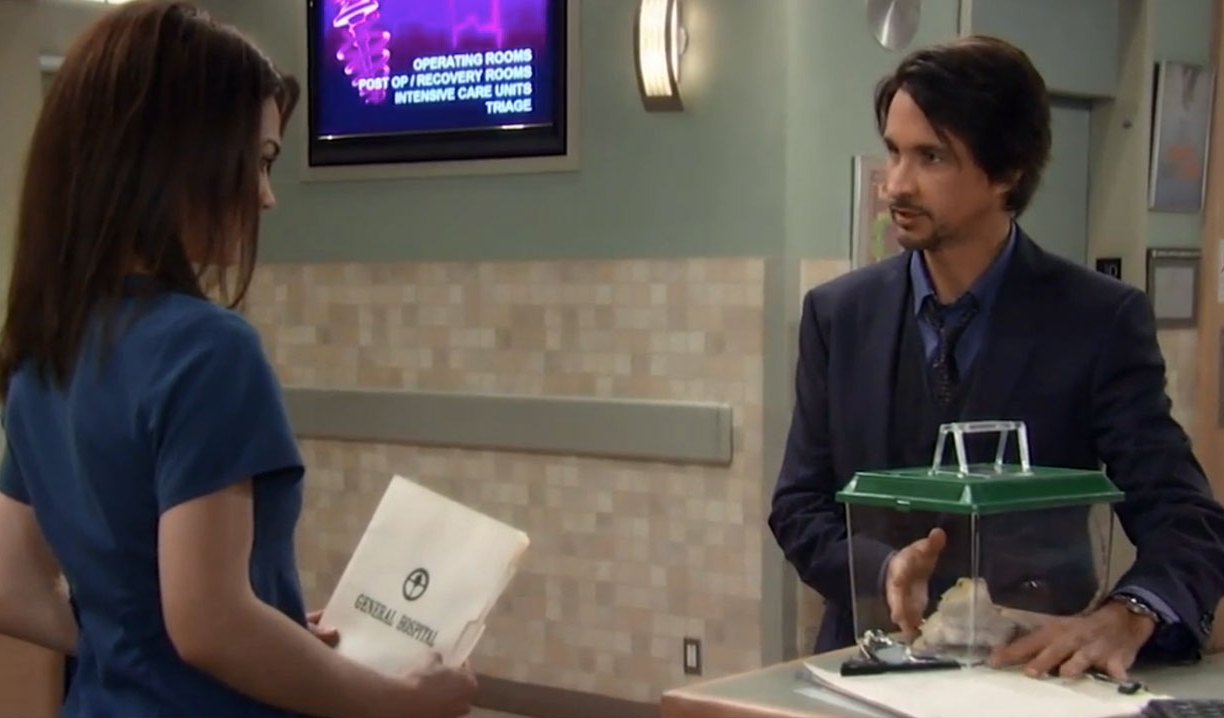 It was an action packed week in Port Charles as enemies were made, lovers reunited, secrets exposed and a fan favorite returned.

Order in the court!
This week finally saw the resolution of Olivia’s breast feeding case, which had dragged on far too long. After the ladies of Port Charles banded together and bared their bras, the judge ruled in Olivia’s favor. A win for Olivia is likely a loss for Alexis, as Lomax is now out for her. They already hinted she’d find a way to disbar her thanks to her husband. Frankly, I’d rather see them strip Lomax of the title of Mayor, which is really overdue.

Service lizard.
Michael Easton made his return to “GH” as Dr. Hamilton Finn, an infectious disease specialist called in to consult on Tracy’s case. With so many character opportunities, I am baffled as to why they had him play another doctor. Some agreed when I asked about this on Twitter, though others were just glad to have him back.

@BlueWizard75 Like ME, but as anotherdoctor! I dont expect brains and greatness anymore from the regime at GH!!

More #GH Dumbness. Couldn't they have the imagination to give him a different occupation? https://t.co/RDf2rLEj4v

I will admit I like the quirkiness of his new character, what with his pet service lizard Roxy, and his just disappearing during the middle of meeting his patient for the first time while everyone argued with Obrecht over him. This character is already far more entertaining than Silas, who I found to be downright dull. By the way, do you think Finn’s lizard’s name could be a homage to “One Life to Live’s” Roxy Balsom, who used to be close to Easton’s John McBain?

The good doctor.
Griffin Munro’s freshness has worn off, and now people in town are starting to wonder what is really going on with him. He has a mysterious scar, refuses to be featured in a Crimson spread, chastises Maxie for talking to him while she has a boyfriend, and preaches the virtues of forgiveness to Anna and Sonny. Many of our readers believe he may have at one time been a priest. That’s an interesting theory, but I hope there is something else going on. I’m over his preachy pants attitude, as I can turn on “Days of our Lives” and get enough of that from former Father Eric.

Curtis on the case.
I love that Nina made a success out of another sabotaged issue, and now that Curtis is on the case of who is out to sink Crimson, maybe this story will actually go somewhere. However, Curtis’ storyline just seems to be stuck, as we still don’t know what the real beef between him and Jordan is. That needs to be stepped up, as right now Curtis is a character I don’t feel invested in at all. Pairing him up with a divisive character like Valerie also isn’t helping me care for him.

Rachel Berlin, the criminal of the century.
The truth about Hayden came out, she is Rachel Berlin, whose father was a Bernie Madoff like figure thrown in jail for a Wall Street ponzi scheme. Her mother is still alive, and she re-invented herself to escape the shame of her father. Nikolas was furious, and so was I, as this was a huge letdown. Months of buildup for this? This is a soap opera, and I wanted something epic, not a story that sounds like it should be on the six o’clock news.

The painting and the pot.
In last week’s Deconstructing GH I pondered if Helena’s tea drinking portrait could have been related to the tea Nikolas served her before her death. Many viewers believe he poisoned her. Hayden discovered the reflection of a man in the silver tea pot, and it definitely looks like Helena is trying to point a finger at Nikolas. If so, this makes one wonder, if she knew he was poisoning her, could she still be alive? Is that what she’s telling him? My money is on yes, as she didn’t leave anyone anything of real value, mainly because she still needs access to the family fortune.

Laura’s steam trunk key.
Laura traced the key Helena left her to a trunk in the Cassadine attic, in which was an old text book of Scott’s, a corsage from a date they had around that time, and a bunch of circled letters in the book that appear to be a secret code. I am loving all of these final mysteries that Helena left behind, a throwback to the grand adventures that often played out in the 80s.

Kristina and Parker.
Professor Parker’s return shed more light on what happened between her and Kristina, with Parker coming out not so innocent after all. It seems she definitely sent Kristina mixed signals, and Kristina maybe was right that she wanted some special attention that her wife wasn’t giving her. However in the end Parker walked away from Kristina, as she wasn’t going to leave her wife, and felt Kristina needed time to figure out who she was. Hopefully this isn’t the end of Parker, as I like the character and this storyline.

This is an opinion piece. You are encouraged to leave your own in the comments.

Deconstructing GH: Julian back in...