Deconstructing GH: A wedding, baby talk, and a lot of lying around

Port Charles rant and raves for the week of February 1 - 5: 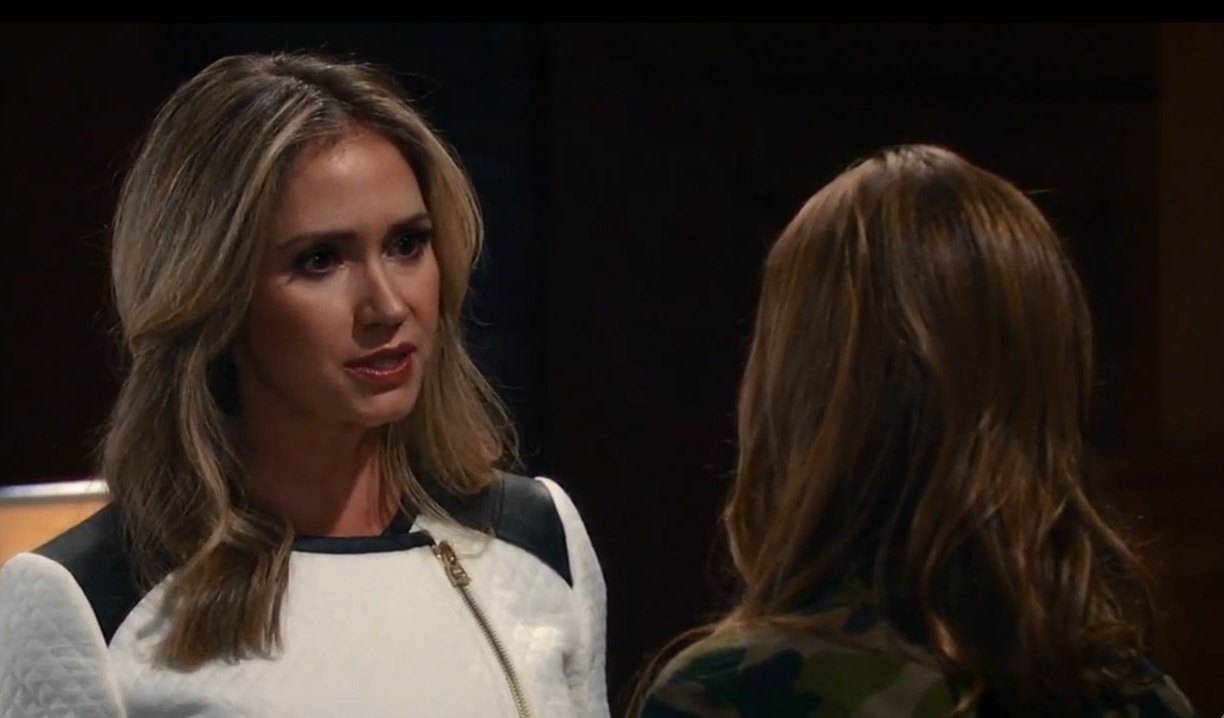 In what seemed to be the longest day ever in Port Charles, a lot of nothing seemed to happen.

She said vs. she said.
Professor Parker’s face-off with Kristina was one of the highlights of the week for me. The sexual tension between the two was great, as was their debate over what happened. I don’t know whom I believe more, but it seems obvious that they both crossed lines. Kristina doesn’t have the best track record when it comes to being honest, which is why I think like the boy who cried wolf, she may be the one whose version is more accurate. I didn’t like her playing the “my dad’s a mobster” card on her professor though. That was low, even for her.

Struck by cars and falling down stairs.
Poor Sam and Jake seem to have the worst luck ever. Sam probably needs to find a new job, as she always ends up in danger, and little Jake needs to just stay out of the street. He’s like a car magnet! I can’t believe they left Sam stuck down in that basement for the entire week. It was not that interesting, and they could have used the airtime for something better. She’s in the basement and unconscious, that takes a single shot to tell, not several episodes. As for Jake, the mention by Aiden that Jake didn’t feel like his brother when he came home has readers speculating in our forums if he’s not the real Jake, or perhaps a clone or twin.

Dante and Lulu are over their marriage, and I’m over them.
In last week’s Deconstructing GH I noted how quick Dante was to serve Lulu with papers, as if he was ready to call it quits so easily. The couple took about ten minutes to try and seriously save their marriage before signing the papers. They sure tried hard! Honestly, given how much the past year has wrecked this couple, I’m thinking some time apart would be good for them. I was happy to see Lulu apologize to Valerie, but again I feel Valerie had every right to tell her she couldn’t accept her apology as she almost got her killed.

Kiki and Morgan play board games.
As with the scenes involving Sam’s basement storyline, I felt like Kiki and Morgan’s extremely long “first date” could have been edited down. I loved that Kiki defied Ava and took Avery to see Sonny, and that Ava was steamed that she couldn’t do anything to retaliate, but the rest of their scenes this week were redundant. Just as with Dante and Lulu, I’m over watching them get along for a day, then fight the next. Now a frustrated Morgan has tossed his meds, again. It seems many don’t want to see them go down this road again.

@BlueWizard75 I hope they stay friends and nothing more then that.

A royally ridiculous wedding for a prince.
I’m not sure if we were supposed to think Nikolas and Hayden’s wedding was funny in a hilarious way, or a really bad laughable way. I found it the former. Again viewers weighed in on Twitter about the nuptials.

@BlueWizard75 @soapoperafan A wacky wedding for sure. Is it even legal? I wonder. #GH

Somehow I just can’t count the Nik/Hoedon nuptials as a “Wedding” even by #GH Wedding Standards. https://t.co/sDMSsmQ6Ne
— Elizabeth (@babysbreath20) February 3, 2016

I pondered the legality of it two weeks ago. Given she was married under a fake name, and under false pretenses, it’s fraud and wouldn’t be legal. However what isn’t legal in the real world often flies in the soap world. Even though the wedding was lame, the honeymoon was hot! I adore Hayden, er Rachel, and Nikolas. It seems though it won’t be long before her secrets are exposed, as a former acquaintance recognized her and called her Rachel in front of Nikolas. I hope they don’t have Nikolas try and off her again.

Secret agent man.
It pains me to say this about the vets of the show, but Anna and Robert’s storyline stinks right now. It’s turned into a bad episode of “Scooby Doo” where all she does is exclaim “I know Paul Hornbsy is behind this!” in every episode she is on. I’m waiting for Paul to pull off his mask and reveal he’s Faison at this point.

The “Real Woman” issue.
Now that Nina has gotten involved and turned Alexis and Olivia’s case into a Crimson issue, I’m a little more interested in this storyline. Anything that puts more Crimson on the screen I am all for. I loved Alexis and Olivia tag teaming Julian on his views, and I adore Nina wanting a baby with Franco. I still worry that just when they are going to be at their happiest point, Franco’s mysterious past that Curtis knows about will come rearing back.

A hot new doc at GH.
Matt Cohen debuted as Dr. Griffin Monroe on Friday, a friend of Lucas’ from medical school and the new neurosurgeon at GH. We already got teased with a possible mysterious past, as he bonded with Sonny over discussing the AIDS crises and the countless people lost to the disease. It was obviously a way to bond him to Sonny, through Robin, but could it mean more? Time will tell!

Helena’s will.
Scotty returned this week and to put Ava in her place, as well as deliver some news to Laura that she needs to attend the reading of Helena’s will. This is the kind of story I’d like to see more front and center, especially during a sweeps month. I can’t wait to see what Helena leaves everyone. Probably a whole bunch of curses!

This is an opinion piece. I encourage you to leave your own in the comments.